'That's a crazy thing!': Chris Hayes is dumbfounded as guest reveals how Rupert Murdoch tried to enlist U.S. intelligence against his ex-wife 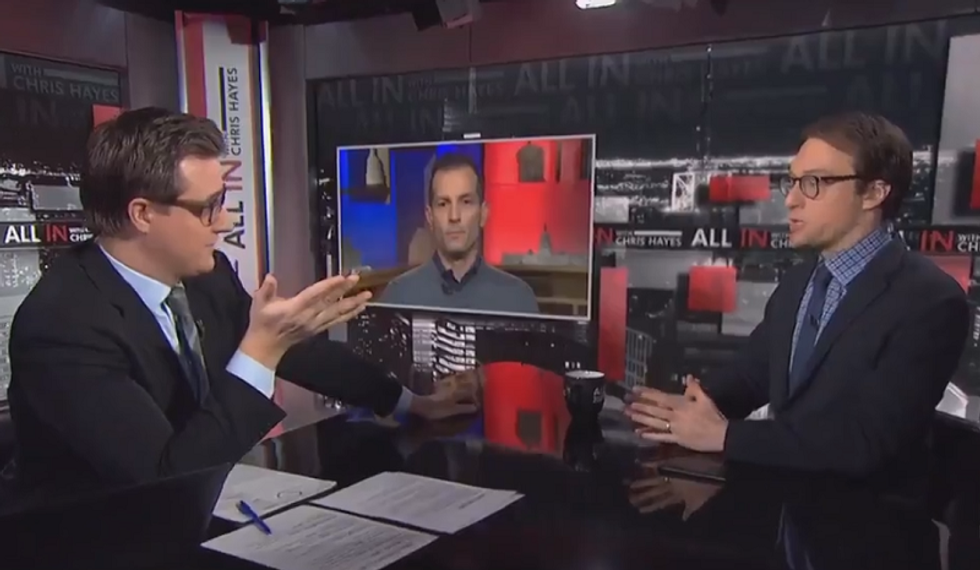 Monday's article by Jane Mayer in The New Yorker, detailing the intimately close ties between President Donald Trump's White House and Fox News, contained a litany of new revelations, including that a Fox reporter uncovered the Stormy Daniels payoff during the 2016 election and was demoted soon after.

Indeed, the link between Trump and Fox News' owner, billionaire international news tycoon Rupert Murdoch is so close that MSNBC's Chris Hayes was visibly flabbergasted as Vanity Fair correspondent Gabriel Sherman walked him through it.

"Another point I want to make is, this is not just about politics, this is about big business, right?" said Sherman. "Rupert Murdoch, the media mogul who controls Fox News, has a personal relationship with the president. The Democratic Congress might want to find out, what favors, potentially, did the Murdoch family get because of this access?"

"I've reported in the past that Trump asked Rupert Murdoch to submit names for the FCC chairman," continued Sherman. "A close Murdoch associate told me that, in fact, Rupert Murdoch reached out to Trump and asked if his ex-wife, Wendy Murdoch, was a Chinese spy, and the allegation is that Trump talked to the intelligence agencies about her connections to the Chinese government."

"What?" blurted out Hayes. "Is that — have you reported that?"

"Yes, that's what sources are telling me," said Sherman.

"Wait, but has that been in print yet?"

"Wait, say that again," said Hayes. "Just, I want to make sure I understand this. The allegation is what?"

"That sources close to Murdoch told me that, in a conversation with the president, he asked him if the intelligence agencies could look into whether his ex-wife was a Chinese asset," said Sherman.

"And this is in the context of a divorce between—"

"They've already been long divorced, but yeah, this was just saying, hey, this is my ex-wife, could you look into that?"

"Yeah, now I don't know if Trump actually did follow through on that, and as Jane Mayer reported, Trump also, you know, vented about, we should get the Justice Department to stop the CNN merger, nothing was followed up on that," said Sherman. "But that fact that these conversations and these mutual relationships are happening, is something that crosses the line from just access journalism to whether there is an abuse of power."