Watch: Kellyanne Conway threatens to 'perform' abortions 'with a gun' on feminists in newly resurfaced video 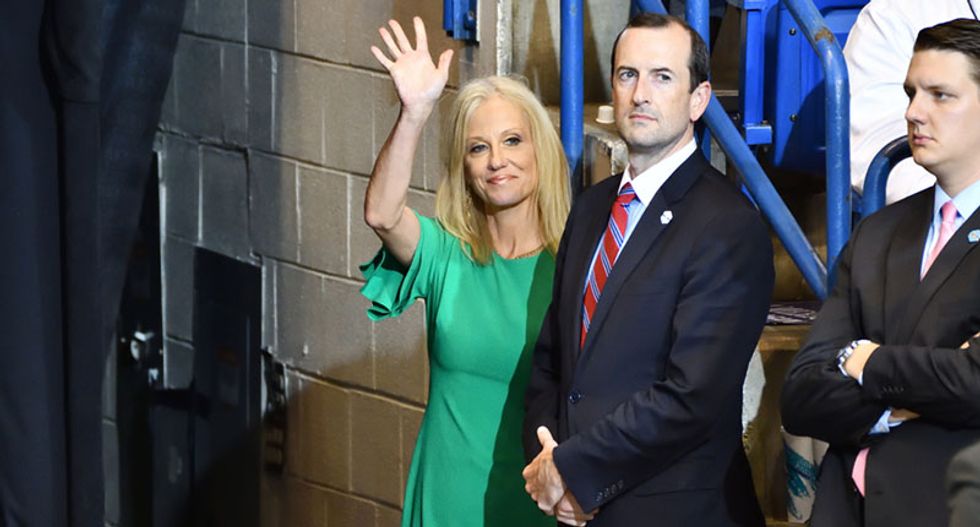 After Kellyanne Conway recently questioned why abortion rights are labeled "women's issues" on Fox News, an old video of the counselor to President Donald Trump threatening to "perform" abortions on feminists using guns was resurfaced by a well-known media news outlet.

Conway recycled a right-wing talking point that falsely claims a bill designed to loosen certain restrictions on late-term abortions in Virginia is "infanticide" during her Monday appearance on "Outnumbered Overtime with Harris Faulkner."

“You say most of the mainstream media being pro-abortion,” Faulkner began. "I’m sure some of them would definitely take exception to that, as they do their jobs objectively."

“They’re going to say they’re pro-choice, but are they for this war against this?” Conway asked in response. "You can't be pro-choice and no longer – and no longer own and claim these late-term abortions that are now being proposed as law in New York, in Virginia and in four other states. You can't pick and choose."

Faulkner was quick to point out to Conway that abortion was, in fact, a political issue – not a media issue. As she sought to shield her colleagues in the so-called "mainstream media" from the "shot" that was taken at them by Conway, the counselor to the president spoke over the Fox News host before eventually grinding the interview to a halt.

“I’m sorry. I have to say this: Why do they call it ‘women’s issues’ then?” Conway questioned Faulkner. “Why do we always have to hear that such-and-such politician is bad or good on ‘women’s issues?’ Don’t they really mean abortion? Because I’ve been in politics for 30 years, and I’ve never – not a single time – heard the phrase ‘men’s issues,’ because people believe men – male voters can handle all the issues."

In the wake of Conway's appearance, Mediaite on Monday resurfaced a 2007 speech Conway made before the College Republican National Committee. The July 13 appearance was captured by C-Span, whose website says the video "is not available at this time."

“I always love to say to those gender studies people: If you say ‘abortion,’ or ‘stem cells’ or ‘guns’ one more time, I’m going to perform one of those on you," Conway can be heard saying in the video. "Because, you know with a gun, because you, by implication, are suggesting that women can’t do the math.”

Conway argued during her Monday appearance on Fox that the news media had given "very little coverage" to the divisive Virginia bill known as the Repeal Act, which was put under a microscope after the bill's sponsor incorrectly said it would allow the procedure to occur even after a woman went into labor. A state House subcommittee voted 5-3 to kill the bill, with all Republicans voting against it and all Democrats supporting it. The issue was ultimately overshadowed by Virginia Gov. Ralph Northam, who came under widespread condemnation after his racist entry in his medical school yearbook from the 1980's was released.

The legislation, which was sponsored by Democratic Del. Kathy Tran, immediately came under fierce backlash after the lawmaker incorrectly told a Republican colleague that her proposal would allow for an abortion to occur when a woman is in labor and about to give birth. Tran's comments, made during a legislative hearing about the bill, were quickly clipped and circulated by Republican groups and went viral on social media, where Sen. Marco Rubio, R-FL, also claimed the bill supports "legal infanticide."

Tran issued a video statement last Thursday in an effort to explain the intent of the bill she introduced. "I introduced a bill to repeal the medically unnecessary and unduly burdensome barriers Virginia women face when they are accessing this healthcare service in consultation with their doctor," she explained, referring to the Virginia law that mandates three doctors certify a third-trimester abortion.

"I presented my bill this week and I was really surprised at the line of questioning that I got," she continued. "I want to be very clear by what's currently allowed in Virginia law. Right now, women are able to access an abortion in the later stages of pregnancy under certain conditions with the approval of medical doctors. I've done nothing to change that. What I have done is try to make sure that women are able to make these decisions and access these services in a timely manner."