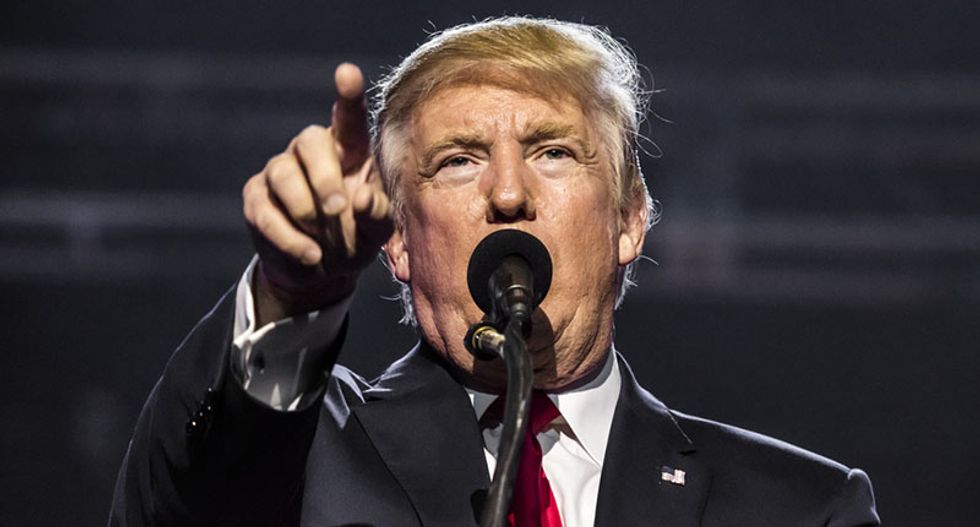 Women's rights advocates were relieved late Monday when Senate Democrats blocked an extreme anti-choice bill from advancing to a floor debate—but were soon outraged by President Donald Trump's lies about abortion care, as well as the corporate media for enabling his blatantly false characterization of the bill to stand.

After Senate Republicans failed to meet the 60-vote threshold needed to push through the so-called "Born Alive Abortion Survivors Protection Act," introduced by Sen. Ben Sasse (R-Neb.), Trump attacked Democrats for their rejection of a bill that would punish doctors for providing medical care to pregnant women and allow civil action against women themselves for making an often-painful, life-or-death decision about their health and family.

"Senate Democrats just voted against legislation to prevent the killing of newborn infant children," Trump wrote on Twitter. "The Democrat position on abortion is now so extreme that they don’t mind executing babies AFTER birth."

Sasse's proposal would require doctors to provide medical care to an infant after a late-term abortion, exercising "the same degree of professional skill, care, and diligence to preserve the life and health of the child" as he or she would for a healthy newborn baby.

The Republicans' narrative on late-term abortions has suggested that doctors, with the aim of "executing babies," routinely perform the procedure in the third trimester of pregnancy on women who are pregnant with healthy, viable babies and have simply decided several months into their pregnancies that they no longer wish to have a child.

In fact, only 1.3 percent of abortions happen after 21 weeks of pregnancy, and according to the National Abortion Federation, they are "generally limited to cases of severe fetal abnormalities or situations when the life or health of the pregnant woman is seriously threatened."

As NARAL Pro-Choice America President Ilyse Hogue explained on Twitter, Trump's statement—and Sasse's claim that the bill is anti-"infanticide"—wildly misrepresent that facts about the legislation.

Heads up: There is literally nothing about this tweet that reflects any version of reality. https://t.co/W62MVJnPWf
— ilyseh (@ilyseh) 1551149993.0

If ANYONE is killing infants, they are murderers and they are charged with murder. That is what everyone agrees sho… https://t.co/1mJIKkd5z2
— ilyseh (@ilyseh) 1551150720.0

The bill was introduced weeks after Democratic state lawmaker Kathy Tran of Virginia was denounced by Republicans including the president for proposing an amendment to her state's current law allowing third-trimester abortions—permitting the procedure if carrying a pregnancy to term would damage a woman's health in any way.

Politicians shouldn't be making these decisions - women and their doctors should. This bill was a political stunt b… https://t.co/vDpQLLiY0W
— Chris Murphy (@Chris Murphy) 1551187709.0

"The media is culpable with headlines like this one from the Washington Post," Hogue wrote, "which would require about 20 minutes of googling to understand how misinformed that frame is."

The media is culpable with headlines like this one from the @washingtonpost "Senate blocks bill on medical care for… https://t.co/YVZSuzHDqK
— ilyseh (@ilyseh) 1551150720.0

.@realDonaldTrump believes that YOU will believe that doctors are monsters, women are completely craven, and Democr… https://t.co/gM1Uk9cEkE
— ilyseh (@ilyseh) 1551150720.0