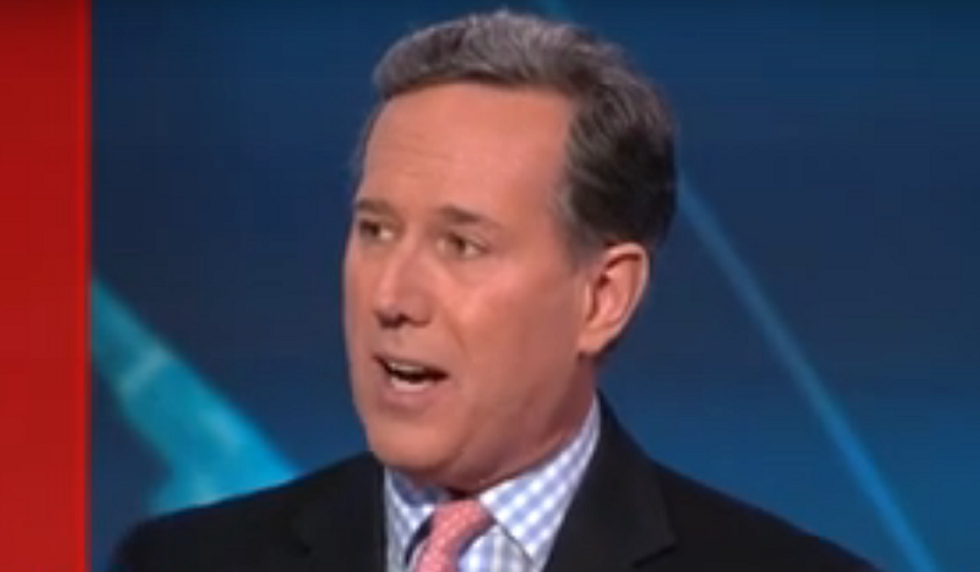 A lot of Republicans were unhappy with how House Democrats' hearing with President Donald Trump's former attorney Michael Cohen unfolded on Wednesday, during which he implicated the president in extensive criminal behavior. Ann Coulter sneered that she would be more impressed if "they got Trump on a jaywalking charge," and Fox Business' Lou Dobbs thundered that voters should apologize to America for electing a Democratic House.

But perhaps no one offered a more scattershot fit of outrage than former Pennsylvania senator and CNN commentator Rick Santorum.

Santorum began by spluttering that Democrats didn't even have the common courtesy to delay the testimony until Trump had left North Korea. "There used to be a day ... when a president was at a summit talking about nuclear arms, that we wouldn't do anything to undermine the president here at home," said Santorum. "And no one seems to care about this. The idea they couldn't put Michael Cohen's testimony off a few days ... is reprehensible. Period. Stop, full stop."

He then suggested the whole hearing was a waste of time because the crimes Cohen implicated Trump in are not that serious, scoffing at "the idea that we're going to get an impeachment on a campaign violation reporting requirement," and comparing it to the unsuccessful prosecution of former North Carolina Sen. John Edwards. (In fact, the crimes Cohen alleged Trump participated in include potential bank fraud and tax evasion, not just campaign finance reporting errors.)

CNN political analyst David Gergen then reminded Santorum that insofar as the North Korea issue, the White House "hasn't provided counterprogramming," so they can hardly complain that the Cohen testimony drowned out Trump's summit.

But what might have been the most incredible moment was his retort to Watergate reporter Carl Bernstein discussing federal prosecutors looking into Trump's lies about Russia.

"Where does he tell the truth? On anything, really?" Santorum said. "He lies about Russia? In your mind, he doesn't tell the truth about anything ever! So why is that inconsistent?"

Santorum did not, at any point, address the substance of the allegations Cohen made about Trump. He repeatedly mischaracterized the nature of the accusations against him, and rounded off the whole thing by arguing, if liberals think Trump lies all the time, how would they even know one of his lies broke the law?

This man is put on television as one of Trump's most credentialed defenders.