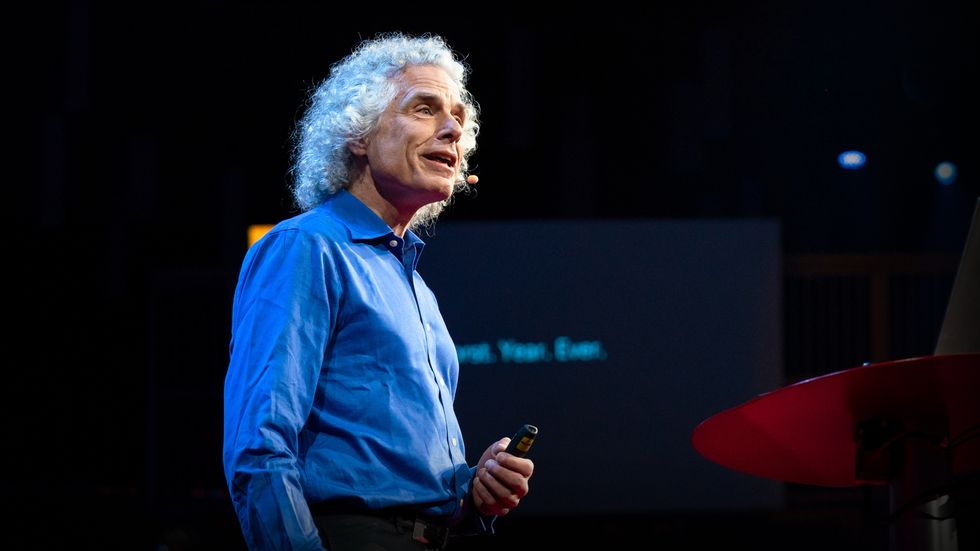 The top ten most watched TED talks are, in order, about:

Just look at Amy Cuddy’s talk, which clocks in at #2 on the all-time most-watched list. Cuddy is a social psychologist at Harvard, where she studies how people judge others and themselves. Eighteen minutes into her TED lecture, Cuddy almost starts crying, and it feels totally natural. You don’t think Why is this Harvard researcher choking up during a talk about her scientific research? You think, Hey, she’s talking about that feeling of being an impostor, and gosh, I’ve been there too!

Cuddy’s lecture describes how a two minute-long posture exercise “could significantly change the way your life unfolds” by making you more confident and less stressed. The lecture also details Cuddy’s own story—a story of hardship, personal reinvention, and unexpected triumph. It’s a moving performance, albeit a moving performance that includes graphs and descriptions of experimental design.

This is science mixed with testimony. It is a motivational speech. In its own way, it’s a kind of sermon.

This week, around 1,200 attendees are gathering for the annual TED (Technology, Entertainment, Design) conference, which is taking place in Vancouver. The conference, whose theme is “Dream,” costs $8,500, and attendees had to apply for spots. The chosen few get to schmooze, network, and listen to upwards of 60 original TED lectures, videos of which will then be posted online. The least popular can expect thousands of viewers. The most popular could hit upwards of 30 million.

These aren’t exactly Justin Bieber numbers, but for 18 minute-long lectures about science, management, creativity, design, and technology, they’re extraordinary. The TED brand has become synonymous with a certain kind of hip, Silicon Valley-style wonkishness. A viral talk, like Cuddy’s, can launch public careers and drive books onto the bestseller list.

Newness is part of TED’s vibe, but the genre it represents is old. If anything, the talks are the latest flowering of a very particular American genre—one that straddles the line between the classroom and church, and between the rhetoric of scientific progress and the rhetoric of divine transformation.

To understand this, you have to go back to the 19th century.

Back before movie theaters and TV, when middle class Americans wanted to go to a show, they’d put on their finest clothes and go watch someone give a very long lecture about science, history, technology, mummies, or other topics beneficial to the moral and intellectual development of the young nation’s citizenry.

Lectures were big business. Popular speakers could make a living traveling from place to place, delivering their talks to packed rooms. Ralph Waldo Emerson was a star on the circuit. Local newspapers wrote stories about lectures the next day, discussing both the speaker and the composition of the audience. At its peak, the lecture circuit attracted as many as a million Americans per week.

The main vehicle for these lectures were the lyceums—local civic institutions that aimed to cultivate intellectual life, often in far-flung towns. The first lyceums took place in the 1820s, and by 1839 there were between 4,000 and 5,000 in the U.S. alone.

Lyceum events sometimes took place in churches, and the institution originally had a Christian flavor. Many lyceum talks touched on religious topics, and ministers were some of the most successful lecturers on the rounds, but science, technology, and progress were major subjects for lecturers, too. The lyceum circuit “was one of the chief means by which scientific discoveries could reach the public,” according to Tom Wright, a lecturer at the University of Sussex and the editor of The Cosmopolitan Lyceum. It was, “the information superhighway of the 1840s and ’50s.”

Today, TED differs from the lyceum circuit in a few key ways. TED talks are mostly consumed on a screen, and while TED has a circuit of local events (the TEDx program), talks are one-off experiences. Plus, they’re capped at eighteen minutes while Lyceum lectures were a little longer. “They’d happily listen to someone talk about Napoleon for an hour and a half,” says Wright.

But TED really does seem to be a resurgence of the kind of theater-lecture hybrid that thrived in 19th century America.

There’s the same sense that intellectual life should be popularized, and that cutting-edge ideas should be tested in front of a diverse audience through the medium of public speaking.

And there’s the pairing of identity with the consumption of big ideas. People didn’t go to the lyceum to learn facts about mummies and steam engines that would help them become better shopkeepers. They went to lyceum talks to participate in a culture of ideas. They went to see and to be seen, and to perform their middle-class-ness, just as attendance at a TED or TEDx conference, or association with that brand, signals membership in the creative class.

TED and the lyceum movement also share an enormous confidence in the power of ideas to lift up society and individuals. This is a progressive vision, but it’s largely divorced from politics. Lyceum lecturers would often touch on political issues, but they tended to avoid divisive stances—after all, speakers were there to perform, not to provoke, and the marketplace didn’t necessarily reward someone who delivered firebrand speeches. TED, too, shies away from the explicitly political. Talks may speak about social betterment, but topics that are actually political—which is to say, concerned with justice, power, and the distribution of limited resources—rarely make the TED stage.

TED bills itself as an engine of social change, but what we have here, mostly, is a particular aesthetic (“The TED talk is today a sentimental form,” Nathan Heller writes in The New Yorker). Wright describes this aesthetic in frankly spiritual terms. TED talks, he told me, are in keeping with “a kind of civic religion of aspiration and self-reliance and communal progress.”

When I brought up this hope-and-progress energy with Vanderbilt historian Paul Stob, a scholar of intellectual culture, he described it as “a great similarity between TED talks today and lectures back then.” In the lyceum era, you weren’t just selling ideas; as Stob puts it, “you were peddling hope and sensibility and a sense of progress.”

Wright calls the lyceum lecture “a displaced secular sermon.” When I brought this term up with Stob, he paused and asked what I meant by secular. “Maybe it’s just preaching, not even secular preaching,” he said. “The lecture circuit wasn’t narrowly religious, in a sectarian sort of sense, but there was tons of religion in it. And I think…there’s a sort of spirituality, at the very least, that runs through a lot of TED talks, even if it’s not narrowly religious. There are stories of salvation, in a worldly sort of sense of the term.”

The redemptive power of ideas

For the most part, Americans today consume public speaking through three avenues: politics, the classroom, and the pulpit. Of these three, a good TED talk resembles nothing so much as a sermon. “The speakers seem fevered, possessed, Pentecostal,” tech critic Virginia Heffernan wrote in the New York Times Magazine back in 2009. “A great TED talk is reminiscent of a tent revival sermon,” Megan Hustad wrote in the Times last year, describing the crowd as a “gathering of the curious and the hungry.” Speakers offer a blend of Big Ideas with personal stories of loss, discovery, and transformation.

Christian Lundberg, an associate professor of rhetoric at the University of North Carolina, Chapel Hill, argues that the arc of a typical TED talk follows a common pattern in evangelical homiletics. In the classic arc of an evangelical sermon, the preacher identifies some moment of fallenness in the world, and then appeals to a text or idea that, properly interpreted, can redeem the rupture. Its a narrative of discovery; the sermon-giver offers “a nugget of truth that transforms my existence,” as Lundberg puts it.

In an evangelical sermon, that nugget of truth comes from the Bible. In something like a TED talk, the nugget usually comes through science or a technical breakthrough. But the basic appeal is the same: here is an idea—here is the Word—that will change your life. TED, Lundberg argues, is tapping into “this really powerful cultural story about the character of redemption and the redemptive power of ideas.”

If there is a single unstated question that animates the whole TED enterprise, it is this: what is the relationship between ideas and change? Against the catholicism of the academy, TED’s answer to this question is pretty evangelical: ideas can transform you directly. Delivered effectively, they can remake the self. They can remake society.

Let’s go back to Amy Cuddy’s talk, about the use of posture to improve self-confidence. Cuddy is a professor, and she publishes her work in academic journals. But her trademark Power Pose concept cuts directly from the lab to self-help: if you hold this pose for two minutes, science says that you’ll have more swagger! Adopting her idea, Cuddy claims, will change your life. Her larger message is that positive thinking can be transformative: “Don’t fake it ’til you make it,” she advises at the end of her talk. “Fake it ’til you become it.”

There’s a reason new ideas often pass through rather convoluted channels of scholarly vetting, government regulation, and media and public skepticism before they make their way into widespread acceptance: most new ideas are wrong, and some of them are outright deceptive. Cuddy’s big research finding, for example, has proven very hard to replicate. The consultant Simon Sinek’s 2009 TEDx lecture about persuasion–the third most-watched TED talk in history–is such a logical and evidential wreck that it’s not even worth the space to pick it apart here.

But if TED and the 19th century lecture circuits—the new lyceum and the old—can offer us anything, it’s a reminder that science and research offer more than new knowledge. They come with a kind of aesthetic, and they invoke certain emotions—among them thrill and hope.

Personally, I have a favorite TED talk: “6 Ways Mushrooms Can Save the World,” in which the mycologist Paul Stamets talks about all the ridiculously useful things you can do with fungi. A bearded bio nerd, Stamets preaches about the use of mushrooms to treat diseases, clean up environmental toxins, and generate biofuels. He imagines a kind of fungal revolution.

Are the world’s environmental problems caused by a lack of good fungal technique? Well, no, there’s a lot more at play. You can’t have a real conversation about environmentalism without discussing capitalism and the distribution of resources—which is to say, power. But after 17 minutes of listening to Stamets, a certain fuzzy optimism takes hold. There’s a promise here that would be familiar, I think, to anyone who’s been moved by a great motivational speech or sermon. It’s a sense that, faced with the grind of daily life, and the intractability of its problems, somehow, through some flash of understanding, the basic terms of our struggle will change.