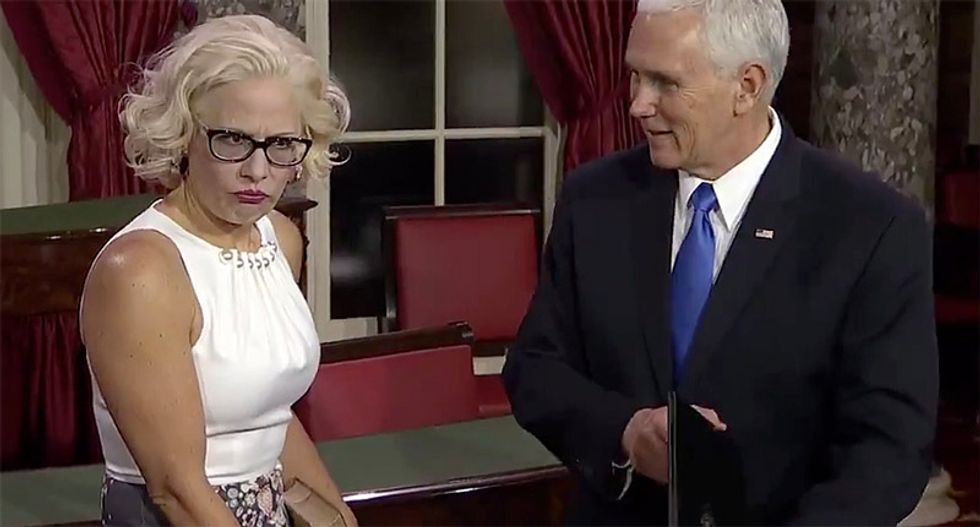 When Sen. Kyrsten Sinema was sworn into the United States Senate on January 3, it was historic in more than one respect. Sinema is the first openly bisexual member of the U.S. Senate, the first woman to win a U.S. Senate seat in Arizona, and the first Democrat to win a Senate race in Arizona since the 1980s. But despite all that, Republican Bruce Ash (a national GOP committeeman based in Tucson) is angry—and on January 5, he used Facebook to attack Sinema as well as the “dumb-ass people” who didn’t vote for her Republican opponent, Sen. Martha McSally, in the 2018 midterms.

Posting a photo of the 42-year-old Sinema (a native of Tucson) being sworn in by Vice President Mike Pence, Ash wrote that the photo showed, “Sinema looking more like Senator Madonna than the Senator Barbie Doll she advertised when she ran for election in 2018.”

In contrast to some of the staunch liberals and progressives who were elected to the U.S. House of Representatives in November—including Rep. Alexandria Ocasio-Cortez in New York City and Rep. Rashida Tlaib in Michigan—Sinema ran a decidedly centrist campaign. Regardless, Ash seems angry with Arizona conservatives who didn’t vote for McSally, writing that Sinema’s “politics and positions will lean further left than the dumb ass people on our side ever imagined when tens of thousands left their ballots blank in the McSally-Sinema election which led the way to her being seated in the U.S. Senate this past week.”

In a separate post, Ash (who runs a real estate company in Tucson) was also critical of Sinema for choosing to be sworn into the Senate on the U.S. Constitution rather than the Bible. The committeeman posted, “Sinema: first openly bisexual senator won’t take oath on Bible.…Arizona proud?”

Both of Arizona’s two seats in the U.S. Senate are now held by women: although Sinema narrowly defeated McSally in November, McSally was also sworn into the Senate on January 3. Sinema took over the seat formerly held by Sen. Jeff Flake (who decided not to seek another term in 2018), while Arizona Gov. Doug Ducey appointed McSally to take over the seat once held by the late Sen. John McCain (who was 81 when he died of brain cancer on August 25, 2018). During her victory speech, Sinema praised McCain and his ability to unify Republicans and Democrats.

Previously, both Sinema and McSally served together in the U.S. House of Representatives.