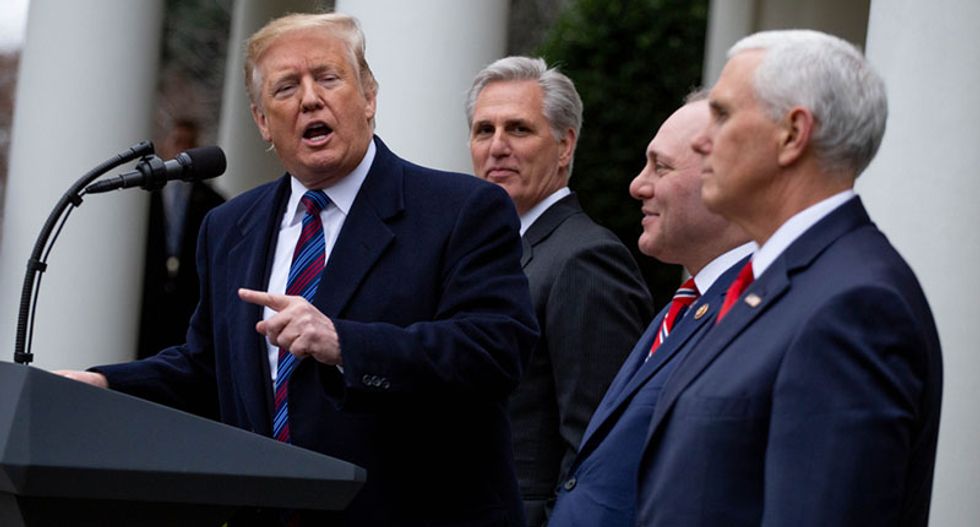 As President Donald Trump's government shutdown drags on and hurts everyone from farmers to troops to diplomats to TSA agents, and as Senate Majority Leader Mitch McConnell (R-KY) continues to block a vote on anything that could end Trump's hostage-taking, the Republican Party's epic, reckless dysfunction is on full display.

On Wednesday, conservative writer and former Republican Max Boot penned a searing indictment of his erstwhile party in the Washington Post, noting how any principles it held in a bygone era are long since abandoned, and its current behavior empowers Trump's worst impulses.

"Traditional Republican presidents such as Calvin Coolidge, Dwight D. Eisenhower and George H.W. Bush were not very exciting, but they were very responsible," writes Boot. "They wanted to manage the government effectively and to live within our means. Those days are long gone. The GOP has metamorphosed from the preternaturally mature 'Father Knows Best' party to the perpetually juvenile 'Van Wilder' party. It wants to live it up, moon the grown-ups and dodge the consequences."

Boot traces the beginning of the downfall to the Reagan years, when Republicans convinced themselves they could make huge tax cuts pay for themselves — and although they were proven wrong, the strong economy at the time validated their approach in their eyes — and they just kept getting more reckless from there.

"In 2017, the Republican Congress passed, and Trump signed, a massive tax cut that delivered a sugar high to the economy that is already wearing off (2018 was the worst year for the stock market in a decade) while bequeathing debt that could take generations to pay off," he explains. "As Bloomberg News notes: 'Total public debt outstanding has jumped ... by $1.9 trillion since President Donald Trump took office,' or 'roughly the size of Brazil's gross domestic product.'"

Trump's new government shutdown over the border wall, Boot writes, is just part of an ongoing series of "drunken frat-boy antics" and "temper tantrums" from the GOP. He notes that the last two major government shutdowns were both caused by Republicans as well — former House Speaker Newt Gingrich shut down the government in 1995-96 to try to force domestic spending cuts, while a gang of Tea Party Republicans led by Sen. Ted Cruz (R-TX) tried to force President Barack Obama to defund his signature health care law with a shutdown in 2013.

While the "border crisis" is a "figment of the xenophobic imaginations of Ann Coulter, Rush Limbaugh and Donald Trump," says Boot, the harm from the shutdown is real, and jeopardizing federal workers, including essential law enforcement, who have to work without pay.

"A party that felt an iota of responsibility to the country would be alarmed by these developments and would reopen the government even if it meant overriding the president's veto," he concludes. "But for the drunken frat-boy party, the damage inflicted by its ideological bender is no reason to sober up. Indeed, for the most antigovernment Republicans, the shutdown is a feature, not a bug, because it is shrinking, at least for a few weeks, the size of the government. The Republicans of yesteryear would send today's Republicans to their rooms without any supper."