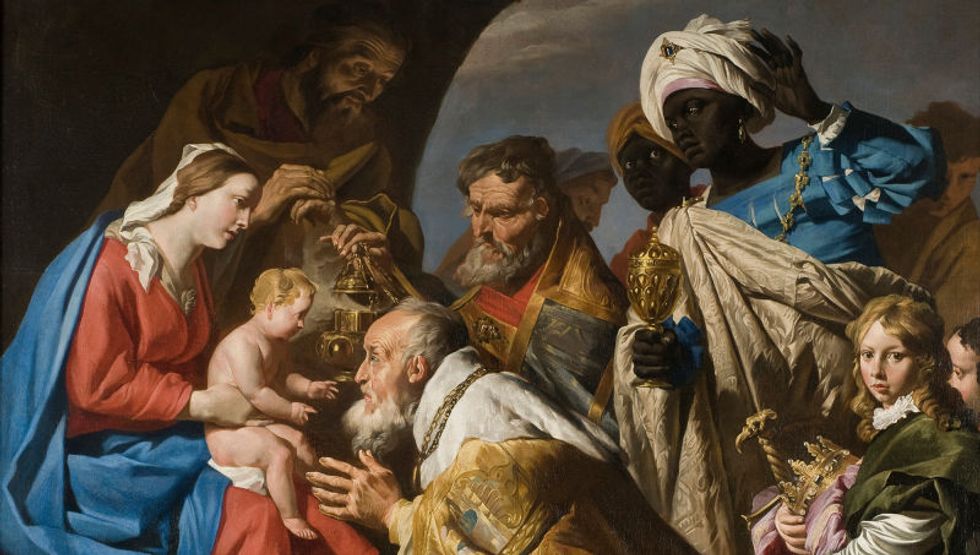 Picture a creche with baby Jesus in a manger and shepherds and angels and three kings and a star over the stable roof. We think of this traditional scene as representing the Christmas story, but it actually mixes elements from two different nativity stories in the Bible, one in Matthew and one in Luke, with a few embellishments that got added in later centuries. What was the historical kernel? Most likely we will never know, because it appears that the Bible’s nativity stories are themselves highly-embellished late add-ons to the Gospels.

Here are six hints that the story so familiar to us might have been unfamiliar to early Jesus worshipers.

1. Paul’s Silence – The earliest texts in the New Testament are letters written during the first half of the first century by Paul and other people who used his name. These letters, or Epistles as they are called, give no hint that Paul or the forgers who used his name had heard about any signs and wonders surrounding the birth of Jesus, nor that his mother was a virgin impregnated by God in spirit form. Paul simply says that he was a Jew, born to a woman.

2. Mark’s Silence – The Gospel of Mark—thought to be the earliest of the four gospels and, so, closest to actual events—doesn’t contain a nativity or “infancy” story, even though it otherwise looks to be the primary source document for Matthew and Luke. In Mark, the divinity of Jesus gets established by wonders at the beginning of his ministry, and some Christian sects have believed that he was adopted by God at this point.

Why is Mark thought to be where the authors of Matthew and Luke got material? For starters, some passages in Mark, Matthew, and Luke would likely get flagged by plagiarism software. But in the original Greek, Mark is the most primitive and least polished of the three. It also is missing powerful passages like the Sermon on the Mount and has endings that vary from copy to copy. These are some of the reasons that scholars believe it predates the other two. Unlike Paul, the author of Mark was writing a life history of Jesus, one that was full of miracles. It would have been odd for him to simply leave out the auspicious miracles surrounding the birth of Jesus—unless those stories didn’t yet exist.

3. A Tale of Two Tales – Beyond a few basics, the nativity stories in Matthew and Luke have remarkably little overlap. In both, Jesus is born in Bethlehem of a virgin Mary who is betrothed to a man named Joseph. That’s where the similarity ends.

In Matthew’s story, an unnamed angel appears to Joseph, astrologers arrive bearing symbolic gifts, a special star appears in the east, Herod seeks to kill Jesus, warnings come during dreams, and the holy family flees to safety in Egypt just before boy infants are slaughtered across Judea.

In Luke’s story, the angel Gabriel appears to the future parents of John the Baptist. They miraculously conceive, but his father is made mute as a punishment for doubting. Gabriel then appears to Mary. During a visit between the two prospective mothers, who are cousins, John the Baptist in the womb recognizes Jesus in the womb and leaps. Later when John is named, his father miraculously regains the power of speech. A census forces Mary and Joseph to go to Bethlehem, where there is no room in the inn. Jesus is born and laid in a manger/cradle, and angels sing to shepherds who visit the baby. After his naming, his parents take him to the Jerusalem temple where he is recognized and blessed by a holy man and a resident prophetess, and then the family returns to their home in Nazareth instead of going to Egypt.

Some Christians try to harmonize these stories but a simpler explanation is that they represent two different branches in the tree of oral tradition. The study of European fairy tales shows that different versions of the stories tend to split off, with characters and magical elements diverging over time much like an evolutionary tree. The Matthew and Luke nativity stories likely underwent a similar process, meaning that oral traditions circulated and evolved for some time before the two authors inscribed their respective versions. Scholars debate how much the authors further revised the stories they received.

It’s interesting to note that each author inserted a dubious historical event (an impossible census in one and an unlikely mass infanticide in the other) to make his plotline work. Dubious histories become credible only after potential eyewitnesses die off—so their presence is one more indicator that one or more generations lapsed before the stories took their present form.

4. Pagan Parallels – Luke’s story appears to be slanted toward a Roman audience, and in fact the idea of gods impregnating human women was a common trope that many Jews and Christians have recognized as pagan. Progressive theologian Marcus Borg argued that the point of the story was to pivot fealty from Caesar Augustus to Jesus. According to Roman imperial theology, Augustus had been conceived when the god Apollo impregnated his human mother, Atia. Titles inscribed on coins and temples during his reign included “Son of God,” “Lord,” and “Savior.” They also included the phrase “peace on earth,” which Luke has his angels sing to shepherds.

5. Say What?! – By the second chapter of Luke, the parents of Jesus behave as if they have forgotten the astounding signs and wonders that accompanied his birth. When the boy is twelve, Mary and Joseph take him to Jerusalem for a festival, where they lose him in the crowd and find him three days later among the teachers in the temple. When they scold him, he says ‘“Why were you searching for me? Did you not know that I must be in my Father’s house?” But they did not understand what he said to them’ (Luke 2:49-50).

Wait. They didn’t know what he was talking about?! This otherwise bizarre narrative glitch, which directly follows the nativity story, suggests that the former was tacked on at a later time.

6. Divinity Rising – If we line up the four gospels in the estimated order they were written—Mark (60CE), Matthew (70-90CE), Luke (80-95CE), then John (90-100CE), an interesting pattern emerges. Jesus becomes divine earlier and earlier. In Mark, as mentioned, he is shown to be divine when he is baptized (and perhaps is uniquely adopted or entered by God at that point). In Matthew and Luke, he is fathered by the Holy Spirit and is sinless from birth. In John, he is the Logos, present at the creation of the world—though also born of a woman. This sequence suggests that theologies explaining the divinity of Jesus emerged gradually and evolved as Christianity crystalized and spread.

After the Gospels of Matthew and Luke were bundled into the Catholic Bible, the two infancy stories merged. The three astrologers became Kings riding camels. Mary got her own “immaculate conception” and became, to some, a sinless perpetual virgin. The place of Jesus birth became a stable filled with adoring animals. And the holy birthday moved to winter solstice, weaving in delicious and delightful pagan traditions including feasting, tree decorating and festivals of light. The birth of a long-awaited messiah fused with the rebirth of the sun—and their joint birthday party became, in the dead of winter, a celebration of bounty and beauty and love and hope that captivated hearts even beyond the bounds of Christianity.

Valerie Tarico is a psychologist and writer in Seattle, Washington. She is the author ofTrusting Doubt: A Former Evangelical Looks at Old Beliefs in a New Light and Deas and Other Imaginings, and the founder of www.WisdomCommons.org.  Her articles about religion, reproductive health, and the role of women in society have been featured at sites including The Huffington Post, Salon, The Independent, Free Inquiry, The Humanist, AlterNet, Raw Story, Grist, Jezebel, and the Institute for Ethics and Emerging Technologies.  Subscribe at ValerieTarico.com.