'Have you done the math on that?' Reporters debunk Sarah Sanders' embarrassing claim that Mexico will pay for the wall 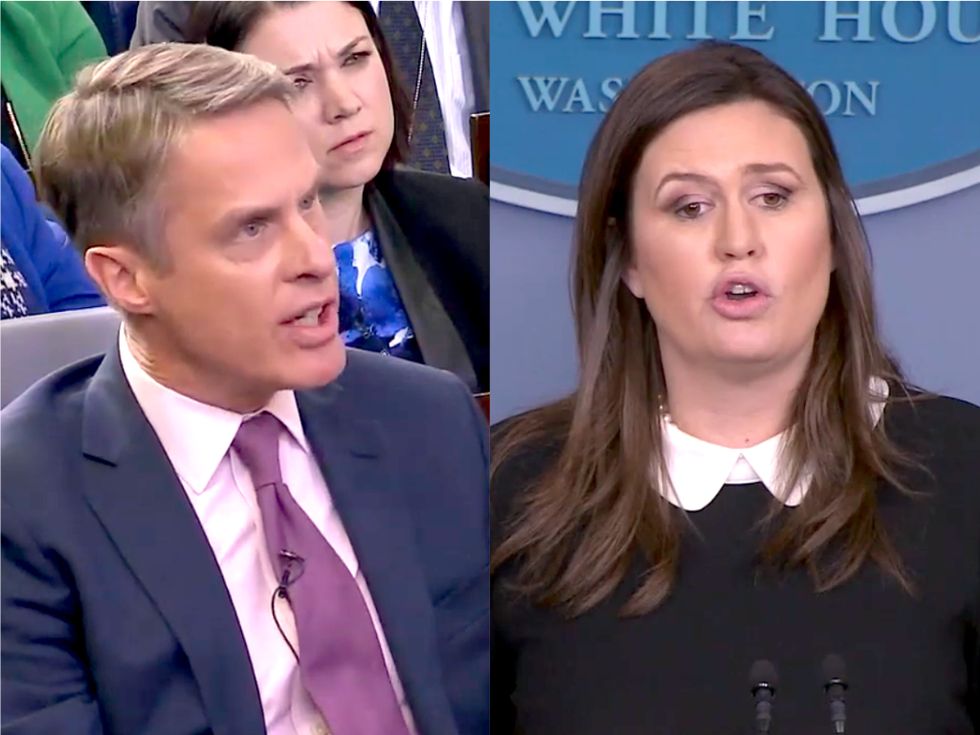 White House Press Secretary Sarah Sanders remains in the unfortunate position — of course, only through her own choosing — of defending President Donald Trump's most preposterous promises and statements.

Speaking at a press briefing on Tuesday, she contorted the basic principles of logic trying to defend Trump's false promise that Mexico will be paying for the border wall. This is a particularly embarrassing topic for the White House right now, as it has threatened to shut down the government as it demands Congress provide wall funds. It now appears to be backing away from these threats. But the entire brinkmanship is ridiculous given that Trump repeatedly promised that Mexico would pay, even as all his detractors said this was ridiculous.

"With the deficit ballooning to over $1 trillion under this president, where are the additional monies for this wall going to come from, and why is he asking the American taxpayer for them when he promised Mexico was going to pay?" asked one reporter at the briefing Tuesday.

"We're not asking American taxpayers for that," said Sanders. "We are looking at existing funding through other agencies right now that we can draw on immediately."

This made no sense. Any government agency the White House could draw funds from receives those funds from taxpayers.

Sanders continued: "The president's been clear that the USMCA deal would provide additional revenue through that deal that would show that Mexico is paying for the wall."

The USMCA is the president's term for the new NAFTA, which hasn't yet been approved by Congress, and only makes relatively minor changes to the original deal.

The reporter wasn't buying it: "The trade benefits, if there are any, don't go to the treasury."

Sanders tried to argue that the supposed benefits of the deal could pay for the wall "four times over." but, as the reporter pointed out, any putative benefits go directly to private citizens, not the government.

"We're talking about additional revenue that wouldn't have existed without the president getting a new deal," Sanders shot back.

"Have you done the math on that?" the reporter replied.

This version of the "Mexico will still pay for the wall" claim has been made before and debunked before.

As Linda Qiu wrote for the New York Times, "There are no official projections of the deal’s effects on tax revenue or economic growth, but experts expressed doubt that the trade agreement could lead to Mexico directly or indirectly paying for the wall."

Mr. Trump may be suggesting that the new agreement will increase economic activity in the United States, therefore generating enough tax revenue to offset the cost of his wall. The new trade deal is intended to make it less lucrative for American manufacturers to locate production in Mexico by requiring higher wages for autoworkers — a provision that the Trump administration says will shift more car production back to the United States.

But even if that happens, higher economic output in the United States “is not coming at the expense of Mexico. It’s a trade growth effect,” said Mr. Lincicome.

It also remains to be seen just how much the U.S.M.C.A. would contribute to economic growth, and how much revenue it would generate. Most trade agreements actually lead to lower federal revenue from tariffs, according to the Congressional Budget Office, but it’s unclear whether their net effect on federal budgets is positive or negative. Still, any potential increase in federal revenue would come from American taxpayers, not Mexico.

So there's no reason to buy any part of what the White House is trying to sell with regard to this claim. Like so many predicted, the idea that Mexico will pay for the wall is just another broken promise. The fact that Sanders defended the idea so half-heartedly makes it clear that she probably doesn't even believe it herself.