China's Belt and Road initiative: a Marshall Plan in reverse 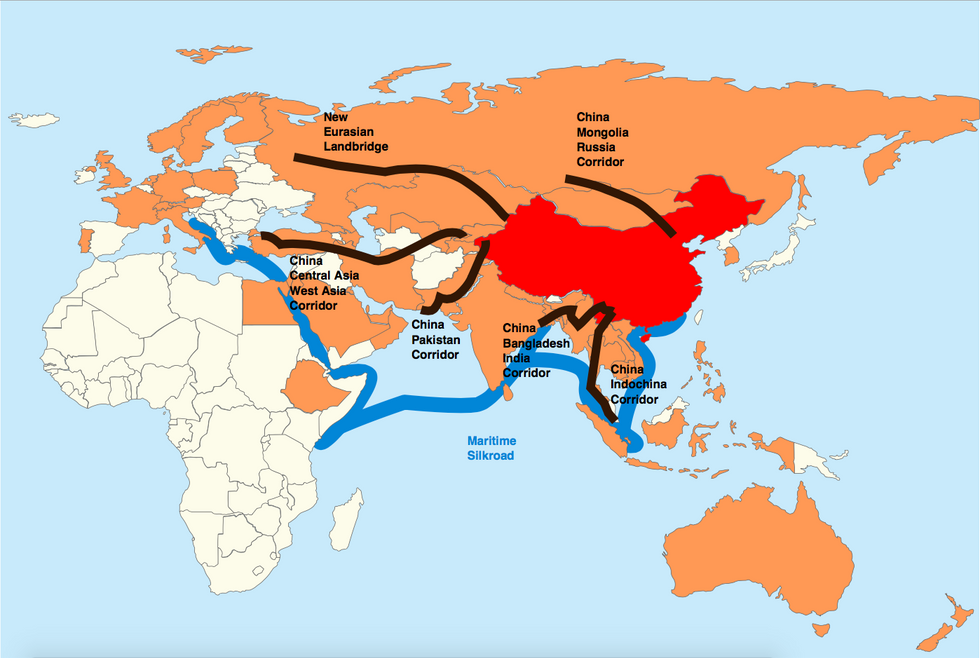 At the end of World War II, much of Europe was in shambles and the continent was faced with the prospect of famine and years of future economic blight. Fortunately, the region’s prospects were transformed by the Economic Recovery Program (better known as the “Marshall Plan”), which injected billions into Western Europe, providing shipments of food, staples, a reconstruction of infrastructure, and the concomitant revival of civilian industrial production. As well as a program designed to induce political stability and economic recovery in Europe, the Marshall Plan also entrenched the economic and political structures through which the U.S. hegemony was consolidated in the post-WWII period.

Is China’s much-vaunted “Belt and Road” initiative (BRI), a multibillion-dollar infrastructure program spread across the developing countries of Africa and Asia, a “modern-day... Marshall Plan,” as a recent New York Times article suggests?

It’s the opposite. Rather than spawning growth, BRI is foisting debt on poor countries ill-equipped to service it, harming their development prospects, and precluding their ability to buy Chinese exports (which was one of the aims of the original Marshall Plan). And Beijing has been funding this initiative via debt-laden Chinese companies, at a time when the country is facing mounting economic challenges both internally and externally. Far from creating a new growth hub with China as its apex, BRI risks creating a new “Axis of Economic Instability” for Beijing and a precipitating cause for a currency collapse in China itself: a project dependent on an endless provision of RMB funding boosts domestic inflation (if it triggers capital flight and therefore erodes the value of the currency), rapidly depletes foreign exchange reserves (as the monetary authorities use those reserves to arrest the currency’s decline), and consequently creates a potential new locus of financial instability for the global economy.

At a time of mounting U.S. protectionism (which has limited China’s ability to offset its considerable industrial overcapacity via exports), the much-touted Belt and Road initiative was hyped as a massive investment program featuring Beijing-financed infrastructure projects across the globe, a modern-day Silk Road designed to expand China’s economic growth and geopolitical ties across the globe. In reality, BRI offers nothing of the sort. The “beneficiary” countries instead have become strewn with Chinese style white elephant projects of marginal economic utility, anything from, as a New York Times article explains, a Thai theater “rigged with hydraulic seats [that] will give moviegoers the sensation of flight, [or] in Australia, an indoor ski slope… going up near the beaches of the Gold Coast.” Even when these projects align more closely to the stated infrastructure goals of the BRI, they often hemorrhage cash, such as Sri Lanka’s Mattala Rajapaksa International Airport, or the multibillion-dollar Gwadar port in Pakistan.

Furthermore, what Professor Brahma Chellaney describes as “debt-trap diplomacy” has ensured that:

“The projects that China is supporting are often intended not to support the local economy, but to facilitate Chinese access to natural resources, or to open the market for its low-cost and shoddy export goods. In many cases, China even sends its own construction workers, minimizing the number of local jobs that are created. …

“China is taking steps to ensure that countries will not be able to escape their debts. In exchange for rescheduling repayment, China is requiring countries to award it contracts for additional projects, thereby making their debt crises interminable. Last October, China canceled $90 million of Cambodia’s debt, only to secure major new contracts.”

Debt-trap diplomacy, then, has precluded the beneficiaries from becoming viable new markets for China’s exports, as the recipient economies are crushed by debt and their local manufacturing is effectively displaced by China’s own imported workforce, which ultimately detracts from their growth potential.

Even though the initiation of the projects results in a short-term boost for China’s companies (and their imported workforces), there will eventually be a toll taken on China. This is because BRI has placed Beijing in the invidious position of bailing out the Chinese companies responsible for building up many of these white elephants in the first place. As Kenya’s East African reported, “China Export and Credit Insurance Corporation, known as Sinosure… has already incurred losses of more than $1 billion on the Ethiopian-Djibouti railway alone.” True, there is nothing stopping Beijing from upping the fiscal ante to keep everything operational, as it can always issue more currency to meet the future funding requirements. But doing so leaves the country’s policymakers with a whole host of unappealing options in the aftermath, as it deals with the consequences of effectively replicating its own homegrown capital investment bubble with a new one abroad in Eurasia—not the least of which is the potential for a collapse in China’s renminbi.

Although the general perception remains that China has been devaluing its currency to offset the impact of Trump’s tariffs, in fact, since August, the opposite has been true: Beijing has been intervening to support the RMB and prevent it from declining. To this point, the government’s actions have been buttressed by rising foreign portfolio inflows, as they create an external source of demand for the Chinese currency. But, as Professor Robert Wade illustrated in his seminal work on the 1997 Asian financial crisis, Governing the Market, these kinds of capital inflows can be very capricious. Instability tends to engender capital flight, as domestic wealth often follows the foreign money out, looking for a stable place to park it.

If conditions begin to turn ugly in China, the relative stability of its currency could evaporate and degenerate into a destabilizing collapse. As a recent Council of Foreign Relations study points out, a big decline in the currency “risks exacerbating the foreign-debt burden of [China’s] highly leveraged corporates, [as well as enhancing the] prospect of a balance-of-payments crisis, in which China would struggle to pay for imports and service foreign debt.”

Responding to the threat of a balance of payments crisis, China has sought to restrict further debt issuance. According to ING Bank, government bond net issuance growth within China collapsed in October. ING speculates that “the abrupt decline... [came] at a time when the economy requires it the most” and that “this year’s new issuance of around CNY 4 trillion according to a media report citing China Chengxin Credit Rating Group might have reached this year’s stimulus limit.”

Traditionally, the threat of those kinds of collapses has usually forced the government’s hand because economic upsets in China have historically led to political upheaval. Beijing is therefore likely to yield and provide yet more bailouts, including those companies badly exposed by initiatives such as the BRI. Given the scale of likely RMB creation required, that could well trigger a weaker currency, which in turn could spur yet more foreign capital flight, turning a gentle decline into a rout.

A collapse in the currency could also create much higher domestic inflation, which historically in China has been a precipitant of political upheaval. Unfortunately, selling foreign exchange reserves to support the RMB (the usual method used to support the currency) might well place China’s banking system below the safety threshold recommended by the IMF and therefore expose a lot of Chinese institutions to even greater risk. Rather than minimizing it, China’s Belt and Road initiative ironically might turn out to be (in the words of U.S. Vice President Pence) a “constricting belt” and “one-way road” to economic disaster.

In China today, many of the country’s policymakers resemble the characters in Jean-Paul Sartre’s play No Exit. They are trapped in a room, unable to agree on future policy, and unwilling to exit even after the locked door to the room is opened because they have no idea where they will be if they exit. Or in the case of BRI, they have no real idea of the ultimate policy consequences when they elect a particular course of action to avert a multiplicity of potential crises.