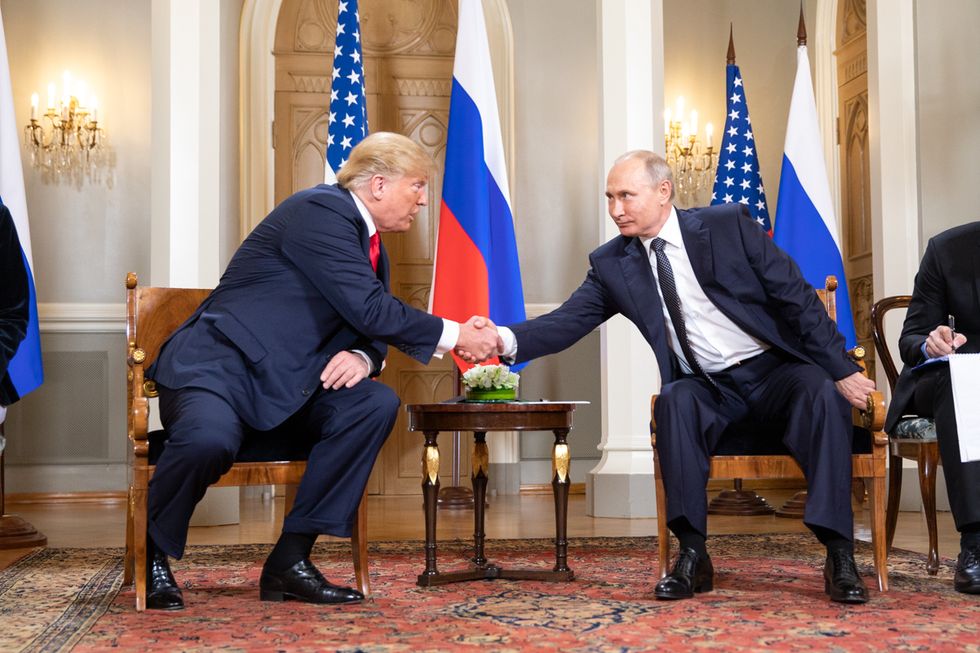 Like a modern, dark inversion of the fable of the Three Wise Men from the east, the end of last January saw the three heads of Russian intelligence visit their counterparts in Washington.

These visits, all simultaneous and all short, were unprecedented, their purpose mysterious, their outcome unknown.

Clearly the visit was important, sensitive and not particularly hostile, otherwise they would not have been allowed into the United States. One might imagine that they proffered some sort of co-operation with the Americans that could only be extended from the highest levels of the Russian government, one rank below Vladimir Putin himself.

But what and how? How could they be welcomed after Russia’s unprecedented and extensive meddling in the 2016 election? What they proffered must have been vital, and perhaps even pertinent to that meddling. As a former adviser on Russia to the Bill Clinton White House, I am following my instincts and offering a series of guesses.

In February, shortly after the visits, special investigator Robert Mueller’s probe into whether Donald Trump’s presidential campaign colluded with Russia yielded indictments against 13 Russians at the Internet Research Agency in St. Petersburg, along with three supporting companies, for meddling. The indictments listed names and other details.

In July, just as the U.S. president was preparing to meet with Putin for a summit in Helsinki, Mueller’s team issued 12 more indictments, this time against the GU, listing not merely names, but extensive information about the perpetrators, a sort of “we know who you are and where you live.”

The three American foreign intelligence agencies — the CIA, the DIA (Defense Intelligence Agency) and the National Security Agency — have formidable reach and penetration. But the information put forward in these indictments, especially the one against GU military operatives, was exceptionally detailed.

I speculate that the information that formed these indictments was what the three Russian intelligence heads had shared with their American colleagues in late January.

Why would they have done this? To make some amends for the chaos they had helped to unleash in the form of President Donald Trump. But why? I suspect that they may have sought help with numerous bomb threats called in by internet services throughout Russia starting in September 2017. Those bomb hoaxes have largely escaped the notice of the U.S. media but were highly disruptive to life in numerous Russian cities.

Is there any other evidence to support my bold conjecture of Russian assistance?

There are two small items that stand out as odd, both stemming from the Helsinki summit.

Read more: How Vladimir Putin outfoxed Donald Trump at Helsinki before their meeting even began

First, Trump seems to have brought the GU indictment list with him to his talk with Putin, a two-hour private encounter. In turn, I suspect Putin presented his own list to Trump, a reciprocal itemization of people of interest, starting with the former U.S. ambassador to Russia, Michael McFaul.

The White House then said it was a reasonable offer on Putin’s part to exchange miscreants, as it were, for local interrogation.

Trump’s assessments are rarely insightful, but this time he might have shone a spotlight on Putin’s state of mind.

From Putin’s viewpoint, if his men had handed over lists to assist Washington, then it was quite reasonable that Washington should reciprocate and assist the Kremlin in its own “wish list.”

Setting Trump up for ridicule?

Of course, if my speculation is accurate, Putin would have been setting Trump up. That’s because Putin knows full well that the United States would never turn over the people on the Kremlin’s wish list, just as the Russian operatives named in the Mueller indictments will never stand trial in the U.S., but remain safe in Russia.

Putin took advantage of the naive and gullible Trump, sending him back with a “reasonable” request, I believe, simply to make him look like a fool. It worked.

There was also the curious matter of the president’s tweeted suggestion, shortly after the summit, that Russia is unhappy with him. He suggests here that he’s has been tough on Russia, which is of course nonsense.

He might, however, have been telling the truth in one regard. Why should the Russians be pleased with his actions in the White House? Trump has been unable to roll back economic sanctions against Russia, though he has been soft in enforcing them. But more crucially, Trump exhibits his lost credibility over anything he says about Russia or Putin. For Putin, Trump is bad press.

Trump has helped fulfil Putin’s wish to create chaos in the U.S., but even in this regard, the president is failing, his days seemingly numbered with numerous legal actions looming all around him, his businesses, his associates and his family.

Putin sees Trump as his patsy, his creature. What else to do with him? How else might he be useful to Putin as the wagons circle? There remains one dramatic possibility.

That has to do with November’s mid-term elections. The media has suggested that the usual leaks from within the Kremlin have gone silent and that American intelligence is now blind about Russian intentions.

What does the Kremlin plan to do? The Russians have already launched phishing attacks on three candidates.

General meddling and chaos in mid-term voting, and perhaps in some of the campaigning, is likely to be part of Russia’s intent to continuing sowing tumult in the U.S. Russia might well even pit sides against one another, mucking around equally with both, since by betting on both Republican and Democratic contenders, Russia will think it cannot lose.

Trump’s role in this, however, would only be tangential, but there may be a more important Russian use for Trump alone.

One Russian insider whom I cannot name has emphasized that Trump is merely a tool to Putin’s determination to cause chaos in America.

As long as America stays locked within its domestic political turmoil, its role on the world stage is diminished and, reciprocally, Russia’s is enhanced. This analyst suggests that, if Democrats win the House of Representatives in November, Putin will release such damning information on Trump that the new Democratic House will be forced to draw up articles of impeachment.

With a Senate that may still lack a two-thirds majority to convict given the Republicans are expected to hold onto more than a third of the seats, such a release would tie up the United States in domestic knots for at least a year and a half, perhaps two — right up until 2020.

This political immolation would be Trump’s last service as a stooge of Putin’s.

Then in 2019 or 2020, Putin would seek a summit with Trump’s replacement or successor.

What information might Putin give to Republicans and to the American people, many of whom are now feverishly following the story?

We can likely expect some sort of major financial corruption centring around his dream of a Trump Tower in Moscow. Given all of Trump’s hush payments to women, there also could be some lurid sexual antics. We could also expect some promises proffered by Trump to Putin, all secretly recorded by the Russians, that are treasonous and could implicate some of his congressional supporters.

That last complication might be what finally convinces many in the GOP, especially if they lose big in November, to return to their original party principles and abandon Trump to his fate while sparing themselves from some similar end.

These are just guesses, of course — and if the last few years have taught us anything, it’s that American politics is erratic and unpredictable. But based on my knowledge of how the Russians operate, this speculation has an air of plausibility. It explains some of this year to date, and might serve as a useful guide amid the chaos that likely looms ahead.