Unequal justice: Donald Trump’s war on the First Amendment will one day reach the Supreme Court

The next time you pick up a magazine or go online to read an article criticizing Donald Trump or any of his corrupt enablers, give thanks to the U.S. Supreme Court for protecting freedom of the press.

Of course, I’m not referring to the current Supreme Court. The current court is dominated by a hard-right majority that doesn’t give a jurisprudential fig about sustaining independent media.

I’m referring to the Supreme Court of a bygone era; specifically, to the landmark 1964 case of New York Times v. Sullivan, which for the first time placed constitutional limits on the power of public officials to sue for defamation.

The Sullivan case arose from a full-page ad taken out in The New York Times by civil rights leaders in 1960 to raise funds for Martin Luther King, Jr. and other activists who had been arrested and abused by police in Montgomery, Alabama. Although the main thrust of the ad was spot on, it contained a few factual errors, such as misstating the number of times King had been arrested, and claiming that police had padlocked a college dining hall in an attempt to intimidate protesting students. 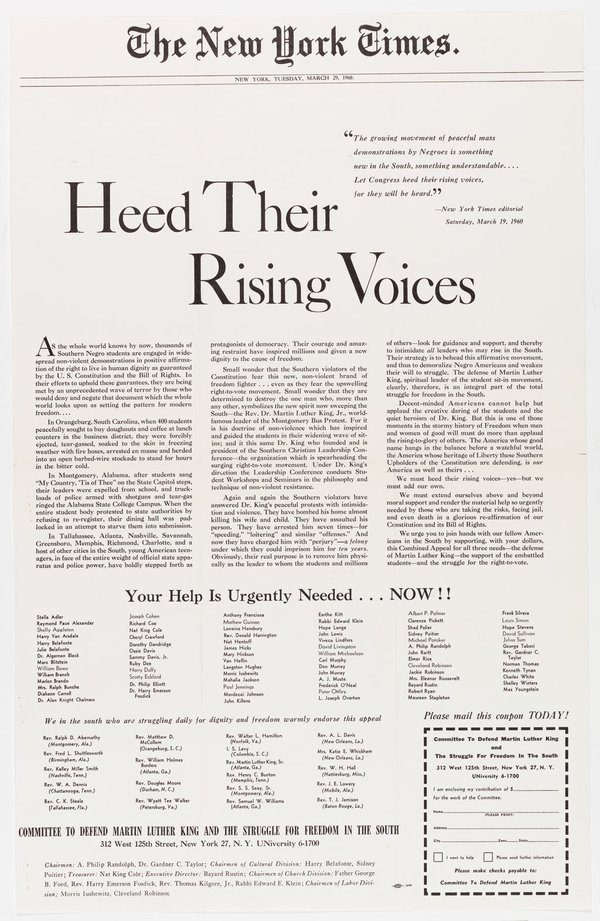 The advertisement published in The New York Times on March 29, 1960, that led to Sullivan's defamation lawsuit. / Committee to Defend Martin Luther King and the Struggle for Freedom in the South.

Citing the inaccuracies, Montgomery police commissioner L. B. Sullivan sued the Times for defamation in state court. He prevailed, and an all-white jury awarded him $500,000 in damages.

When the Sullivan verdict was rendered, defamation lawsuits were governed exclusively by state law, and they were often slanted heavily in favor of plaintiffs, especially rich and well-connected ones who could afford steep litigation costs. To prevail, plaintiffs only had to establish that they had been defamed by a preponderance of the evidence—the lowest standard of proof in our legal system.

In many instances, the only viable defense available to reporters, publishers, and ordinary people who chose to speak out against government misfeasance was that their allegations were true in all respects. As a practical matter, this meant that anyone wishing to criticize the wealthy and the powerful did so at considerable personal risk.

The New York Times appealed the Sullivan decision, and fortunately, the Supreme Court under the leadership of the legendary Chief Justice Earl Warren granted review.

By the time the appeal reached the high court, there were at least ten other libel suits pending against the Times that had been lodged by local and state officials in Alabama alone. Together, the suits sought $5,600,000 in damages, an enormous sum in the early 1960s. The litigation was part of a broad strategy employed by Southern racists to use the courts to bankrupt newspapers that were covering the civil rights movement, and in the process undermine the movement itself.

The Supreme Court realized the magnitude of the issue and rose to the moment.

On March 9, 1964, the court overturned the Sullivan verdict. Writing for a unanimous bench, Justice William Brennan reasoned that our “profound national commitment” to “uninhibited, robust and wide-open debate” required protection under the First and Fourteenth Amendments, even when the debate “includes vehement, caustic and sometimes unpleasantly sharp attacks.” Henceforth, the court held, public officials would be precluded from recovering damages for allegedly defamatory statements related to official conduct unless they established by “clear and convincing evidence” (a far higher standard of proof) that such statements were made with “actual malice”—that is, that they were made with the knowledge that they were false, or with reckless disregard for the truth.

Sullivan constitutionalized the law of defamation, establishing the actual malice standard throughout the country. In a series of subsequent decisions in the late 1960s and early 1970s, the court extended Sullivan and the actual malice rule from “public officials” to “public figures,” as Trump has become since leaving the White House.

The American right has never accepted Sullivan and the protections it offered the media. Donald Trump has been particularly eager to undermine those protections, and he remains on the attack.

In 2006, Trump sued Time Warner Books and writer Timothy O’Brien, claiming that he had been libeled in a biography O’Brien had written, TrumpNation: The Art of Being The Donald. The alleged defamation was O’Brien’s assertion that, considering all of the real estate huckster’s assets and liabilities, Trump’s net worth was actually in the neighborhood of $150 million to $250 million rather than the $5 to $6 billion he had claimed.

After five years of litigation, O’Brien won a state appellate court ruling in 2011, granting summary judgment in his favor and finding that Trump could not, as a matter of law, meet the Sullivan test of actual malice. For all the mischief he had caused, Trump was ordered to fork over $1 million in legal fees.

But Trump was unbowed.

Throughout the 2015-2016 presidential campaign, he pledged to change the nation’s defamation laws, effectively declaring war on the First Amendment. In a February 2016 rally in Fort Worth, Texas, he told a cheering crowd, “I think the media is among the most dishonest groups of people I’ve ever met. They’re terrible. If I become President, oh, do they have problems. They’re going to have such problems.”

He added: “One of the things I’m going to do if I win, and I hope we do, and we’re certainly leading, is I’m going to open up our libel laws so when they write purposely negative and horrible and false articles, we can sue them and win lots of money. We’re going to open up those libel laws so that when The New York Times writes a hit piece, which is a total disgrace, or when The Washington Post, which is there for other reasons, writes a hit piece, we can sue them and win money instead of having no chance of winning because they’re totally protected.”

In 2020, Trump’s election campaign filed defamation complaints against The New York Times, CNN, and The Washington Post. Only the case against the Post is still pending. The others were quickly dismissed for running afoul of Sullivan.

Earlier this month, he sued CNN again for defamation, alleging, among other things, that the network had maligned him when various program hosts and guests labeled his claims of 2020 election fraud as “the big lie,” invoking comparisons with the propaganda of Adolf Hitler.

Although the lawsuit has been widely panned as having zero chance of winning (one commentator has described the complaint as “a rancid garbage fire” of personal grievances), winning at the trial level is clearly not the goal of the ex-commander-in-chief’s lawyers.

The goal is to get the case—or one like it—before the Supreme Court to overturn Sullivan, much as the court jettisoned Roe v. Wade last term in its Dobbs ruling. Two justices—Clarence Thomas and Neil Gorsuch—are already on record calling for Sullivan to be reexamined. In 2019, in a concurring opinion in a case involving Bill Cosby, Thomas characterized Sullivan and the rulings that extended it to public figures as “policy-driven decisions masquerading as constitutional law.”

It would only take three more votes on the court to consign Sullivan to the same fate as Roe. There’s no reason to believe that Justices Samuel Alito, Brett Kavanaugh, and Amy Coney Barrett wouldn’t join Thomas and Gorsuch in such an undertaking.

The court’s arch conservatives are on a crusade to return American law to the late nineteenth century. And they are just beginning, with a push and a shove from a former President.