Photo by Sohaib Ghyasi on Unsplash
children in red and gray shirts standing on gray sand during daytime
The Conversation
July 31, 2022 Human Rights

The U.K. government was due to begin its first deportation flight to remove asylum-seekers to the East African country of Rwanda on June 14, 2022, exactly two months after signing the U.K.-Rwanda agreement. The asylum-seekers were from several war-torn and politically unstable countries, including Syria, Sudan and Iran.

Each year, thousands of people – many fleeing repressive governments or poverty – attempt to cross the English Channel in fragile boats in the hope of starting a new life in the U.K.

Boris Johnson, the U.K. prime minister, defended the U.K.-Rwanda deal in June 2022, saying it would “remove the illegal cross-Channel trafficking of people whose lives are being put at risk.”

In exchange for Rwanda receiving the deportees, the U.K. has paid the country about US$142 million to cover the initial costs of operating the program as well as economic development projects in Rwanda.

The U.K. deportees were expected to integrate their lives into Rwandan social communities.

But the first Rwanda deportation flight did not take off as planned.

The European Court of Human Rights, the regional judicial human rights body in Europe, issued what are called interim urgent measures to stop the scheduled flights.

Such measures are most often issued in cases where there is imminent risk of death or torture.

Member states are bound by the decisions of the Court, and its rulings are enforced by the Committee of Ministers of the Council of Europe – Europe’s leading human rights organization.

But instead of abiding by the decision, the U.K. government not only stressed its commitment to deportation flights, it also signaled its intention to pull out of the European Court of Human Rights.

As a scholar of refugees and postwar reconstruction, I see the deportation flights to Rwanda as part of a growing list of what are euphemistically known as migrant deterrence practices. These practices are used by Western countries to deter future migration of mainly people of color from countries in Latin America, Asia, Africa and Oceania, collectively known as the Global South.

In exchange for money paid to the receiving country, asylum-seekers are sent to those poorer countries to enable wealthier nations to circumvent international legal obligations to those seeking asylum.

The use of countries like Rwanda by Western states is on the rise.

Since 1992, Australia has had a mandatory detention policy for “unauthorized” arrivals, which have included asylum-seekers.

Since 2001, it has also been removing asylum-seekers to Manus Island in Papua New Guinea and Nauru – a poor island country in the Pacific Ocean – for processing.

This has been the case even if arrivals applied for asylum in mainland Australia immediately upon arrival.

According to the United Nations High Commissioner for Refugees, “externalization of Australia’s asylum obligations has undermined the rights of those seeking safety and protection and significantly harmed their physical and mental health.”

European countries have also been pursuing similar programs with Libya, Morocco, Egypt, Tunisia and West African nations such as Nigeria.

They each provide financial aid packages to the respective low-income countries in exchange for preventing migrant mobility and absorbing deported asylum-seekers.

Thus far, Austria, Denmark and the Flemish far-right in Belgium have welcomed the U.K.-Rwanda agreement with the hope that more European states will seek partnerships with countries outside the continent to address irregular immigration.

Johnson’s resignation on July 7, 2022, is not expected to halt the U.K. government’s plans to continue deportations to Rwanda. But in a new turn of events, Rwanda said on July 22 that it can only accommodate 200 deported asylum-seekers and will not be able to stop their efforts to cross the English Channel again.

The 2022 Nationality and Borders Act

Deportations to Rwanda are part of the U.K.‘s 2022 Nationality and Borders Act, a law that drastically changed citizenship and asylum rules in the U.K.

In addition to deportations, the act allows the government to strip citizenship from British people without notice for reasons related to, among other things, national security or counterterrorism.

In the U.K., the reasons to strip citizenship can be defined broadly and may affect about 6 million Britons from immigrant backgrounds.

The 2022 Nationality and Borders Act also allows for the criminal prosecution of those who cross the English Channel on small boats to seek asylum.

The U.N. Refugee Agency has criticized the legislation on which the act is based for being at “odds with the United Kingdom’s international obligations under the Refugee Convention.” These obligations include “not expelling refugees who are lawfully in the territory except on grounds of national security or public order.”

Deportations under such conditions are controversial because they are violations of the principle of non-refoulement in international refugee law.

The goal of the principle is to prevent individuals from being returned to countries where they have fled and may still be in danger of torture, persecution or death. 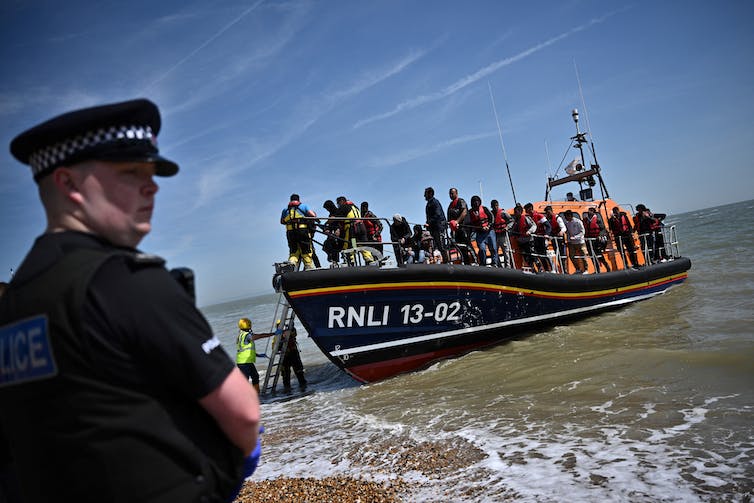 A British police officer stands guard as migrants disembark from a lifeboat after they were picked up at sea while attempting to cross the English Channel.

Despite this, the U.K. and other European countries have continued to deport asylum-seekers to such places.

Between 2007 and 2016, the U.K. deported 2,748 young people to war-torn and unstable countries such as Afghanistan, Iraq, Iran, Libya and Syria.

At least 605 of them were Afghans who had arrived unaccompanied as asylum-seeking children from their war-ravaged country.

According to Amnesty International, many of the deportees face arbitrary detention, kidnapping, torture and even death in the the countries where they’re sent.

In addition, studies have shown deportations like the kind that have taken place in Europe have caused long-term damage.

These include undue burdens on family members, such as loss of family income to meet basic needs, family separation that causes psychological damage including depression and trauma, especially in children.

In recent years, Rwanda has become a host country for approximately 130,000 refugees from around East Africa, particularly from the Democratic Republic of Congo and Burundi.

In addition, between 2013 and 2018, Israel paid $5,000 for every African migrant deported to Rwanda under a “voluntary” migration agreement.

Israel made a similar arrangement with Uganda. Under the terms of the controversial arrangement, several thousand Sudanese and Eritrean asylum-seekers had to choose between immigration detention in Israel or to “voluntarily” agree to be deported to Rwanda and Uganda.

Many of those deported to Rwanda have consistently struggled with lack of documentation and poverty, and have mostly fled the country and attempted to return to Europe.