Ever since former White House aide Cassidy Hutchinson’s remarkable testimony in the recent January 6 committee hearing, I’ve been thinking – as I’m sure many people have – about courage. Seeking analogies in literature, I think of two women from Greek mythology: Antigone and Iphigenia.

Courage often engenders more of itself: Being brave may make you even braver. In the cases of these two heroines, courage doesn’t save any lives.

But these women’s behavior does make us ask what people are capable of, and whether we too might be able to summon such courage. The behavior of the powerful men around Antigone and Iphigenia shows how only a rare few are able to summon courage, and dramatizes how, instead, the drive to maintain power takes the form of cowardice and willful blindness.

In Sophocles’ tragedy Antigone, the heroine, daughter of the late King Oedipus, ritually buries her brother Polynices by sprinkling dust on his exposed corpse.

Her act defies King Creon’s recent edict that Polynices be left to rot, unburied. Polynices and his brother Eteocles fought for control of Thebes, and the brothers killed each other. To Creon, Polynices was a traitor who attacked his native Thebes, while Eteocles, who died defending the city, merits a hero’s funeral.

Antigone’s sister Ismene, fearful, tries to dissuade Antigone from this act of rebellion. We can’t defy the king’s command, she protests. Besides, we are only women, and men are stronger. Ismene asks Antigone to pardon her for refusing to help with the rebellious act of burying Polynices. 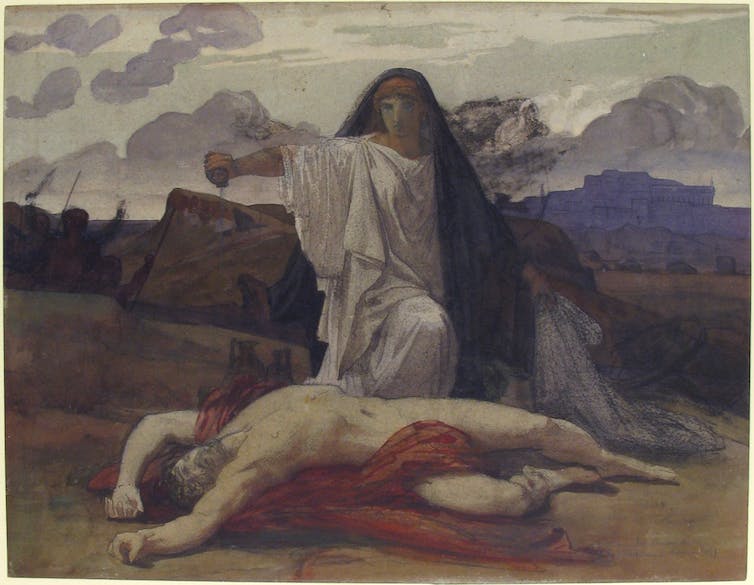 Antigone’s courage in burying her brother has inspired much art through the centuries, including this work by French painter Jules-Eugène Lenepveu in the 19th century.

Undaunted, and contemptuous of her sister’s cowardice, Antigone proceeds and is arrested. In the ensuing confrontation, Creon asks whether she has heard his recent decree. Antigone answers defiantly that she is answerable not to Creon’s edict but to unwritten laws so ancient that no one knows when they originated.

Who makes the laws? she asks. To which laws are we answerable? If a law is unjust, need we obey it?

Rewards not the point

Antigone disregarded Creon’s law out of loyalty to her brother. For Hutchinson, the choice was reversed: Would she heed the law and testify to the committee, or would she be intimidated by demands of loyalty made by representatives of former president Donald Trump?

She may be rewarded for her courage. But often, admiration and memories are the only rewards available. Courage isn’t really about rewards. It may be planned or impulsive; it may come as a surprise to the courageous person. It may inspire others to be courageous, or simply inspire with the vision of what this rare quality looks like.

That’s what Ukrainian president Volodymyr Zelenskyy has done; and in a different key, that’s what Hutchinson has done.

The courage required for such defiance is the salient point. Antigone tells Creon that her fellow citizens would speak of their agreement with her act of defiance “if their lips were not sealed by fear.”

“In that view you differ from all these Thebans,” says Creon.

No, answers Antigone: “They also share it, but they curb their tongues for you.”

It’s true that although she has received threats to her safety, Hutchinson doesn’t face immediate execution, as Antigone did. But her courage, like Antigone’s, looks all the more remarkable because it contrasts so starkly with the behavior of many others, many of them her superiors at work and most of them men.

As Antigone points out to Creon, the silence of the cowed Theban populace is not exactly a ringing endorsement of his edict.

‘To show no fear’

Hutchinson’s unforgettable descriptions of her boss Mark Meadows’s desperate efforts to distance himself from the alarming news she was trying to give him remind me of another Greek tragedy, Euripides’ Iphigenia in Aulis.

In that play, the heroine’s father, Agamemnon, decides Iphigenia’s life is more expendable than his ability to lead the Greek army to military victory. Once he has resolved that his daughter must be sacrificed, Agamemnon summons Iphigenia and his wife Clytemnestra to Aulis, where he claims his daughter will marry Achilles. But a distinctly nonmarital altar awaits the trusting young girl. 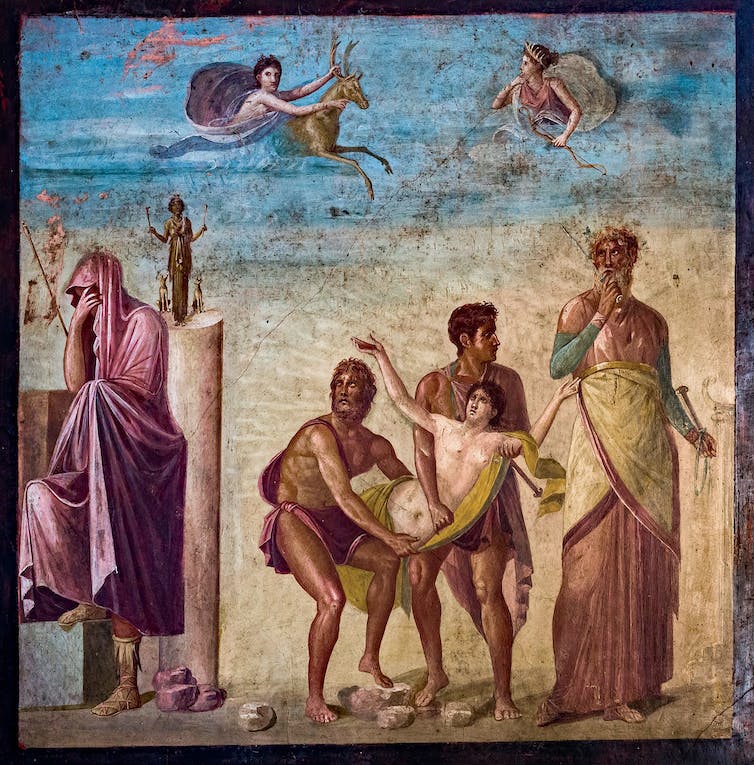 In this wall painting in Pompei, Iphigenia is carried away to the sacrifice by two servants, following her father, Agamemnon.

Part of the thoroughgoing irony of this play lies in the failure of Clytemnestra and Achilles, despite their promises and protestations, to protect the innocent Iphigenia, whose initial horror gives way to a desperate resolve: She has more courage than her mother or Achilles, let alone than her father. Iphigenia finally goes off willingly to be sacrificed.

I must die.
I have to die.
But to die gloriously,
to step free
of lowborn cowardice,
not to be base,
to show no fear -
that is what I wish …
Oh sun that lights the day,
I move now to another life,
to a different fate.
Goodbye, beloved light.


A striking theme is Agamemnon’s refusal to be transparent about the crisis even after Clytemnestra confronts him. He feels for his daughter, but mostly he feels for himself; it’s finally all about him. Agamemnon’s brother Menelaus articulates Agememnon’s character best, as he recalls Agamemnon’s rationalization of the decision to sacrifice Iphigenia:

God forbid …
that you should lose your power and command,
honor, glory, fame, your burnished name.


Agamemnon feels above all self-pity:

Later in the play, Agamemnon seems to yield up all power and simply acquiesce to the situation:

No, it’s not a choice. It’s obligation. …
Willing, unwilling - it’s now out of my hands.


If Agamemnon had a phone, it’s easy to imagine him staring at it, as we are told Meadows did, refusing to look up, refusing to listen.

The ending of Iphigenia in Aulis has Iphigenia spirited away by a goddess, while a deer takes her place on the altar and is sacrificed instead of the girl. But many readers have found this solution purposefully unconvincing and ironic, and the text may be unclear. We’re certainly invited to imagine a more dire outcome.

However you imagine the end of this story, a constant seems to be that Agamemnon cannot bear to watch, to see. A mosaic from Pompeii shows him muffling his face in his mantle. The Chorus in Aeschylus’ “Agamemnon” describes the sacrifice right up to the climactic moment, and then they, too, flinch: “What happened next I did not see and will not say.”

A 1977 film version by director Michalis Cacoyannis concludes with Agamemnon staring in horror at something we ultimately cannot see, as a terrifying black-robed prophet grabs the girl, while smoke billows around the altar and obscures the view.

Agamemnon seems paralyzed, helpless to act. In the French tragedian Racine’s 17th-century version of the tragedy, as well as in Euripides, the onlookers all stare at the ground.

If they had phones, that’s where they’d be looking.