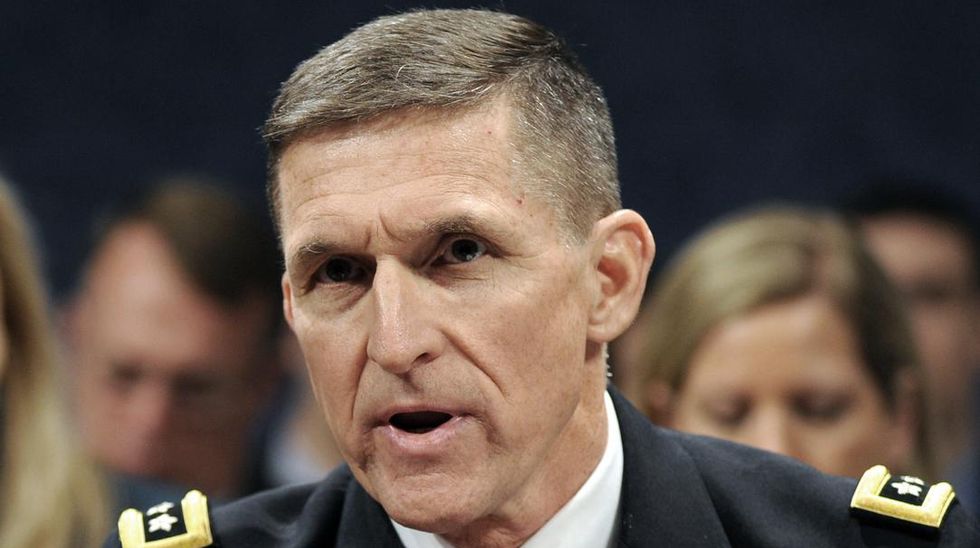 Michael Flynn is always in the news for the worst reasons.

Today, it’s because of the former Trump advisor’s feud with Lin Wood and the leaking of text messages and audio recording during which he calls QAnon “total nonsense” as well as a CIA psy-op. Last time, he was calling for a single religion in the United States. Time before that, QAnon members accused him of being a Satanist for a sermon at a church drawing from a former New Age apocalyptic leader.

Next time, it may be for something worse. In any case, everything Flynn has been doing suggests that QAnon or not, his audience, his rhetoric and his goals are far more concrete and far more sinister than the mocking media coverage suggests. Let’s start in September.

On September 17, Flynn was at the “Opening the Heavens” Conference at the Lord of Hosts Church in Omaha, Nebraska. That event claimed to be “an annual, multi-day event where the prophetic heart of God and the manifestation of His supernatural power are demonstrated to those in attendance and [those] viewing online around the world!”

Flynn’s speech made news due to QAnon’s reaction to it. It was said to be Satanic, ironic given QAnon’s resemblance to the Satanic Panic of the 1980s. Flynn’s speech resembled a 1984 sermon by Elizabeth Clare Prophet, founder of the Church Universal and Triumphant, a New Age apocalyptic group best known for their move to bunkers in Montana to await a prophesied nuclear apocalypse in 1990. Not only was it a failed doomsday cult, but it was a theosophic movement, something associated with Lucifer by its 18th-century founder.

Flynn said he felt called to St. Michael, the archangel and his namesake. While the link between Prophet and Flynn is interesting, the text of Flynn’s “Archangel Prayer” is all by itself not so great:

We are your instrument
Of those sevenfold rays
And all your archangels, all of them
We will not retreat, we will not retreat
We will stand our ground
We will not fear to speak
We will be the instrument of your will
Whatever it is
In your name, and in the names of your legions
We are freeborn, and shall remain freeborn
And we shall not be enslaved by any foe
Within or without
So help me God.

READ: The Supreme Court shows off its contempt for women

“Seven rays” is a concept used in theosophy and in the Summit Lighthouse. Prophet’s prayer to Archangel Michael, which people have compared Flynn’s sermon, is not only part of the theosophic movement, but an aggressively anti-Communist talk, ending:

Archangel Michael, Stand with me!
Save my child!
Save my household!
Save my nation and bind those Communist hordes!

Others can analyze the I AM movement and its issues, but the use of militant religious language and the comparison to an aggressively apocalyptic, anti-Communist doomsday cult is bad enough.

Then in early November, Flynn and Wood had a series of exchanges -- people have focused on the audio recording of Flynn calling QAnon a CIA disinfo operation — but more worrying was the fact that he told Wood, on November 3, to read an article proving QAnon is a fraud.

READ: Democrats will have a 'boatload of material' to use against 'unhinged, out-of-step' Republicans in 2022: conservative

Why more worrying? Because it was written by Hal Turner, a neo-Nazi radio host who’s promoted various QAnon conspiracies and served time for threatening elected officials -- he advocated murder repeatedly. The article is incredibly scary. It included this passage:

The Trump Anon believers want SOMEBODY ELSE to do it for them. Well, I’ve said this before and I will say it again now: Nobody is coming to save them/us. Nobody is coming to save the country. If you want something done, you gotta do it yourself. And until someone (but not me) decides that it is finally time to throw away all the comforts of this life, and brutally slaughter the people who are doing all these things, (and by “slaughter” I mean exactly that) then all these things will continue, unabated, to the destruction of our country and our oh-so-comfy lives.

This is standard Turner fare -- to preserve white nationalist power, people have to murder others, including elected officials -- but to have someone with Flynn’s background and his elite status within QAnon conspiracy and other movements promoting it is infinitely more terrifying than the entertainment value of seeing him bashing QAnon.

A week later Flynn and Wood were in Springfield, Missouri, at a “Preserving America” event billed as “Come and listen to America’s tier-1 patriot speakers and learn about preserving America under the Constitution.” Outside of the Springfield News-Leader, it garnered little press -- but one local sheriff attending claimed he had, “A great conversation with General Flynn. He wanted me to know the American Sheriff is the last line of defense for our freedom. I agree!”

Flynn has spoken with Richard Mack for the “Constitutional Sheriffs and Peace Officers Association” podcast, an anti-government extremist group that works to recruit sheriffs into the “patriot” militia movement. The comment should be taken in that light.

Then there is Flynn’s ongoing “Reawaken America” tour, the most recent news items before the Wood blowup. On November 13, the tour was at the Cornerstone Church in San Antonio, John Hagee’s church.

Hagee is an apocalypse minded Christian Zionist and his son and executive pastor of the church, Matt, was on stage for the event. The “Reawaken America Tour,” a QAnon speaking tour, has numerous pastors presenting -– Dave Scarlett, Mark Burns, Phil Hotsenpiller, Leon Benjamin, Greg Locke, Jackson Lahmeyer, Brian Gibson among them. All have pushed the Big Lie and Christian Nationalism.

On stage, Flynn said, “if we are going to have one nation under God, which we must, we have to have one religion. One nation under God, and one religion under God.” The clip got widespread media play, but it is much more important in that broader context. “Reawaken America” has events in Dallas in December at Elevate Life Church in Frisco, where Pastor Keith Craft runs men-only “Warrior Nights,” dresses in militant garb, and mocks mask-wearing and the government.

In January, they’ll be at Dream City Church in Phoenix, which had hosted a Trump rally in 2020 and had been sent a cease-and-desist about promoting a fraudulent air filter system that June.

In February, they’ll be at Trinity Gospel Temple in Canton, Ohio, where Pastor Dave Lombardi tweeted out on November 3: “‘King Cyrus’ will prevail! Christian principles will prevail!,” and “the ‘Walls of Jericho’ will fall tonight! The Gospel message will prevail! The March continues!”

Both ideas have violent overtones — the fall of the walls of Jericho is followed by the massacre of all inhabitants. “King Cyrus,” a reference here to Donald Trump, destroyed the empire of the Babylonians.

These events are linking congregations nationwide in a specific project -- to build an ultranationalist Christian right to control of America.

READ: The meaning of white supremacy since the rise of Donald Trump

Flynn’s fall events show it is not as simple as whether or not he’s a grifter who pretends to believe in QAnon. He is. He’s a fraud. He’s corrupt. And we already knew this. But he’s also a corrupt fanatic, who believes in overthrowing the government and imposing a theocracy. He certainly seems comfortable reading and promoting neo-Nazi articles advocating the literal slaughter of enemies while doing so.

Driving him out of QAnon is great, but the other groups he’s engaged with, the other ideologies he’s a part of, are no laughing matter.