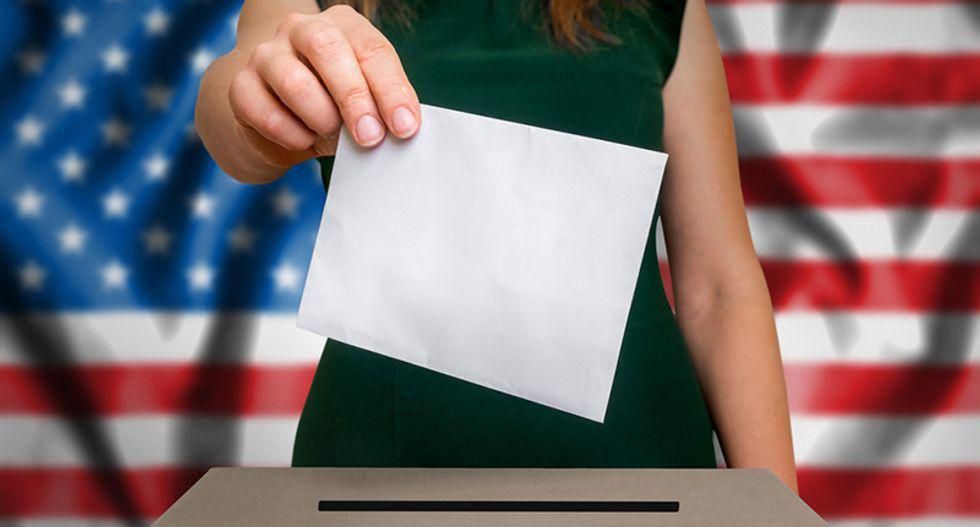 Royalty-free stock photo ID: 735158137 Election in United States of America - voting at the ballot box. The hand of woman putting her vote in the ballot box. Flag of USA on background.
Another GOP loyalist voter caught voting for a dead relative: report
Brett Bachman
and
Salon
December 03, 2021

A far-right website known for spreading 2020 election conspiracies is being sued by election workers in Georgia who say they became the target of harassment and death threats as a result of the outlet's campaign to sow doubt about the legitimacy of President Joe Biden's victory.

The Gateway Pundit, a fringe political site run by two brothers named Jim and Joe Hoft, falsely claimed last year that Ruby Freeman and her daughter, Shayne Moss, had manipulated ballots last November as part of their duties as poll workers for the Fulton County elections board, which covers the Atlanta metropolitan area. The conspiracies quickly spread after then President Donald Trump himself called them out by name last December — mentioning Freeman at least 18 times during his infamous call with Georgia Secretary of State Brad Raffensperger.

Now, the pair is suing the outlet for running the evidence-free claims — following similar lawsuits by election equipment companies against right-wing publications, including Fox News, Newsmax and One America News. Freeman and Moss, both of whom are Black, are two of the first individuals to take on the influential and oftentimes conspiratorial far-right media machine that gained outsize power during Donald Trump's time in the White House.

"I want the defendants to know that my daughter and I are real people who deserve justice, and I never want them to do this to anyone else," Ms. Freeman said in a statement to The New York Times.

The pair outlined the way their lives have been upended by The Gateway Pundit's conspiracies in a lengthy report published by Reuters Wednesday, claiming that they had been deluged with threatening phone calls and even people showing up at their doors late at night in an apparent attempt to intimidate them. The wire service cited several 911 calls Freeman made after these incidents:

Freeman made a series of 911 emergency calls in the days after she was publicly identified in early December by the president's camp. In a Dec. 4 call, she told the dispatcher she'd gotten a flood of "threats and phone calls and racial slurs," adding: "It's scary because they're saying stuff like, 'We're coming to get you. We are coming to get you.'"
Two days later, a panicked Freeman called 911 again, after hearing loud banging on her door just before 10 p.m. Strangers had come the night before, too. She begged the dispatcher for assistance. "Lord Jesus, where's the police?" she asked, according to the recording, obtained by Reuters in a records request. "I don't know who keeps coming to my door."
"Please help me."

According to the lawsuit, a large group of Trump supporters even surrounded Freeman's Georgia home on Jan. 6 — just as another group was storming the U.S. Capitol building in a last-ditch attempt to stop the certification of President Joe Biden's victory. Luckily Freeman had already fled her home on the advice of FBI agents, who predicted accurately that the day would become volatile. She apparently did not return home for more than two months following the incident.

Freeman and Moss' lawsuit was filed Thursday in a Missouri circuit court in St. Louis, where Jim Hoft maintains a residence. According to the Times, the pair is being represented by a nonprofit called Protect Democracy, a nonpartisan group "focused on resisting authoritarianism in the United States."

The lawsuit does not indicate a sum Freeman or Moss is seeking — instead, they are asking for damages to be "determined at trial."