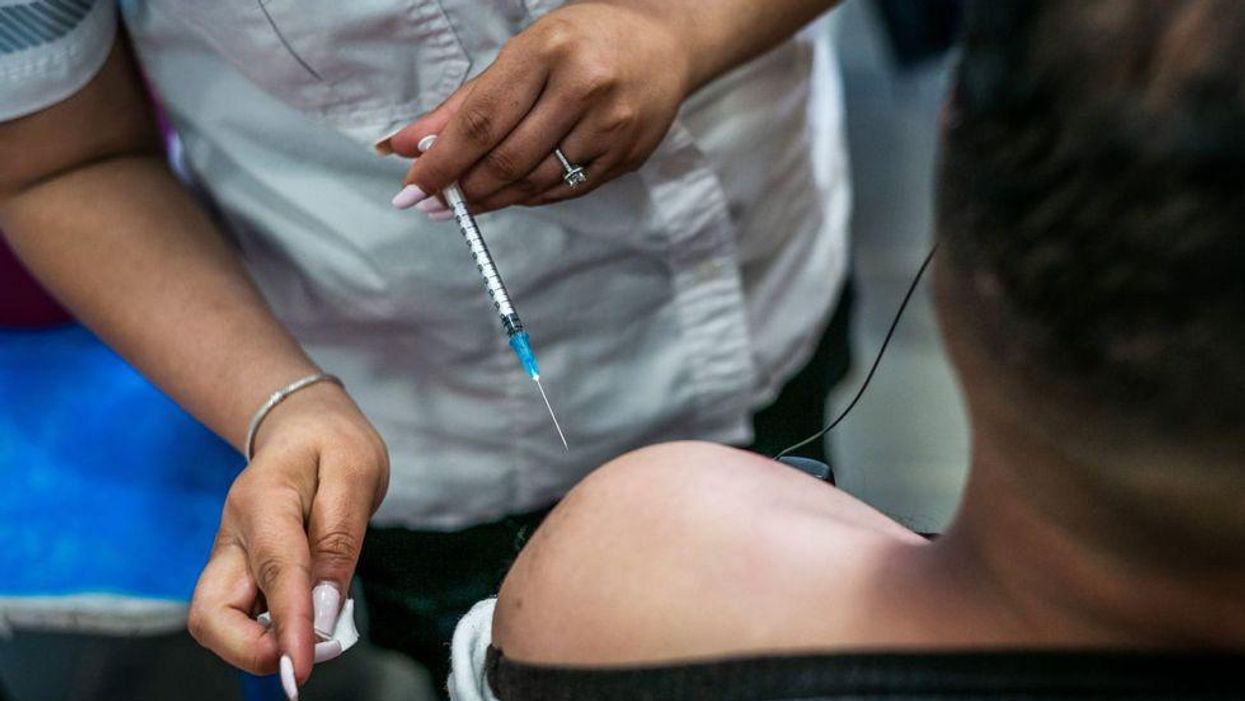 A Palestinian cross-border worker receives his dose of the Covid-19 vaccine at a vaccination centre opened at the checkpoint of Meitar, a town of Israel's Southern District. Ilia Yefimovich/dpa
Mark Sumner
and
Daily Kos
September 12, 2021

That's it. That's the post. There's really not a whole lot left to say after the headline.

But … a new compilation of available data put together by the CDC shows the stark difference between being vaccinated and unvaccinated in the time of COVID-19. Despite all the news of breakthrough infections, people who have been fully vaccinated are much less likely to get infected. if they do get infected, they're less likely to become seriously ill. These are things that doctors already knew, but it's nice to see these definitive numbers even though the delta variant is now prevalent everywhere.

If you're reading this site, then the odds are you're already one of the majority of Americans who have been vaccinated. The latest data from Civiqs shows that 91% of Democrats fall in camp "Already Vaccinated," with another 4% saying they intend to be vaccinated. That's the kind of number that keeps measles and mumps in check, and both of those diseases are much more transmissible than any form of COVID-19. If everyone was vaccinated the way Democrats are vaccinated, we would not be having a new wave of infection.

Of course, we are having a new wave of infection; one that, on Friday, saw the U.S. rack up another 171,000 cases and 1,761 deaths. Florida and Texas once again led the way, as Ron DeSantis and Greg Abbott continue their neck and neck competition to be the worst governors in America. However, they face some stiff competition from someone who hasn't gotten nearly as much press—Tennessee Gov. Bill Lee.

Tennessee is home to that school where men followed a doctor into the parking lot and threatened his family because the doctor had the audacity to simply testify and answer questions for school board members. That school, Williamson County, was out all last week after so many kids and staff members came down with COVID-19 that classes became impossible. Good job there.

But that's not all. In a hearing this week, Gov. Lee's ban on school masks went to court after parents of immunocompromised students sued the state for putting their kids in danger. As education site Chalkbeat reports, the attorney for the state argued that schools should use "creative scheduling" to see that those kids could attend classes without encountering any children who were intent on being free to spread disease. Because sure, schools have no problem re-scheduling classes and moving students around based on who is or isn't wearing a mask on a particular day.

It's this kind of creative thinking that has generated such a surge in COVID-cases in the Volunteer (to be sick) State, that Tennessee has actually moved to the top of the pack when it comes to the number of COVID-19 cases by population. For a long time, the Dakotas hung tight to that spot, along with Rhode Island, which got battered in the initial outbreak, but now Tennessee has surged ahead. A full 16.5% of Tennesseans have now tested positive for COVID-19, and with a statewide rate of positive cases at 21%, there's no doubt that number still has room to grow.

But DeSantis is not going to be dismissed so easily. Florida has also surged ahead (literally) of North Dakota and now holds the number two spot with 16.1% of the state's population having tested positive. In terms of raw numbers, it's no competition, Florida has had 3.4 million cases to Tennessee's 1.1 million. Still, it seems that the Sunshine State might have a little trouble making the top of the sickest state chart, since it's positivity rate is down to "only" 14% and it's actually vaccinated at a rate quite a bit higher than Tennessee.

With just 43% of the state's population vaccinated, several counties below 30%, red hot levels of positivity, and Bill Lee running point on terrible policies, it seems there is a good chance that Tennessee might hold onto the crown as America's Sickest State. Congratulations. I guess.

In any case, this is where we are. So take the CDC image above, cut it out, keep it in your pocket, and wave it at everyone you know who might possibly not be vaccinated. With 36% of Republicans still saying no there are, unfortunately, plenty of opportunities.

It really shouldn't take Joe Biden strapping someone down and putting a needle in their arm to make this happen. Common sense should be way, way more than enough. However, the well known problem with common sense is just how uncommon it can be.

Oh, and while 5x better odds than the unvaccinated are great … wear your mask.

There are *zero* counties on NYT's list of 100 deadliest COVID counties per capita this week with better-than-avera… https://t.co/YsCrnxwAW7
— Steven Dennis (@Steven Dennis) 1631375291.0