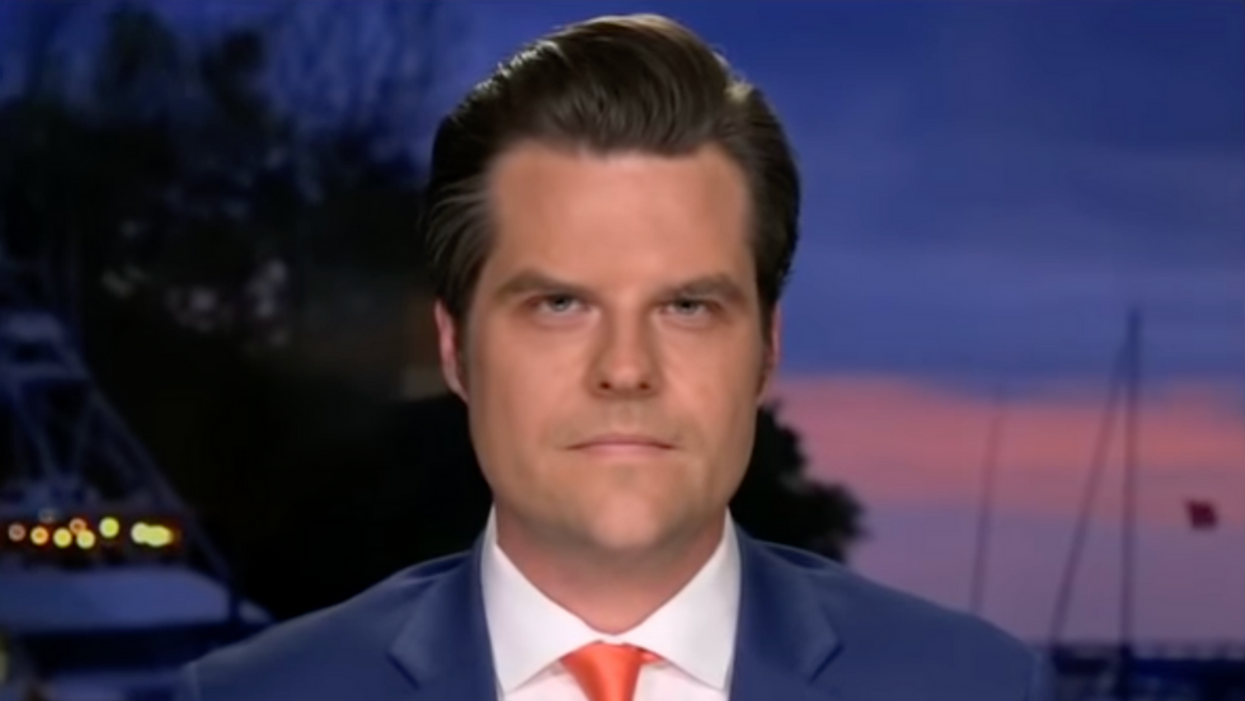 The grand jury charged Florida man Stephen Alford, 62, of attempting to commit wire fraud and conceal evidence. Previous reporting had found that there was a federal investigation into a scheme by Alford and others to ask Gaetz's father, Don Gaetz, for $25 million to fund a rescue mission in Iran.

Rep. Gaetz had claimed that this request was part of an "extortion" attempt related to the investigation into allegations that he has been involved in child sex trafficking, corruption and other crimes. An associate of his has already agreed to plead guilty to these charges, though Gaetz denies them. When the investigation into his conduct first emerged, Gaetz tried to distract from the scandal by pointing to the "extortion" tied to Alford.

He tried to argue that the investigation of him was driven by duplicitous agents out to get him. But it turns out that the supposed "extortion" attempt wasn't quite that — at least insofar as the Justice Department sees it.

Rep. Gaetz's argument was that the plot sought to use the investigation to extort his father out of money. What the indictment indicates, however, is that the plot wasn't about extortion, just fraud. It says Alford falsely promised he could get a presidential pardon for Gaetz in exchange for money, and he used interstate wires to do it.

When I previously wrote about Gaetz's extortion allegations in April, I argued that they were not supported by the public evidence. For example, one document obtained by the Washington Examiner said that the plan was that after the Iran rescue attempt, the team will "strongly advocate that President Biden issue a Presidential Pardon, or instruct the Department of Justice to terminate any and all investigations involving Congressman Gaetz." As I argued at the time, that doesn't look like extortion. That just looks like a silly and obviously hollow promise — there's no chance President Biden would pardon Gaetz for the allegations against him or intervene in a DOJ probe to help him.

The new indictment alleges that Alford made more than hollow promises, but demonstrably false claims in an effort to obtain Gaetz family money. It claims that Alford falsely communicated to Gaetz's father (described as "D.G." in the indictment) that Biden has said he will "strongly consider" pardoning Rep. Gaetz (called "Family Member A) or ending the investigations into him. Alford also reportedly said he "will get that pardon" and that he could "guarantee" no prison time.

It also says Alford attempted to destroy or conceal evidence on an iPhone in the course of the investigation.

It's not clear how strong a case this really is against Alford. It certainly seems like a hare-brained scheme, but it's not against the law to propose a terrible idea to someone. It is a crime to lie to them in order to get their money, but Alford may argue that he was just speaking hyperbolically about his hopes for the plan rather than defrauding anyone. It may be hard to judge the allegations without additional context.

Though it probably doesn't help Alford's case that, according to the Washington Post, he has already been convicted of local and federal fraud crimes.

But what does seem clear is that — unless the DOJ comes out with another indictment — investigators didn't find substantial evidence of extortion. That's important because it undercuts the reason Gaetz was so interested in drawing attention to the Alford scheme to begin with. If the charges were being used to extort the Gaetz family, it may be reason to believe that the investigation isn't on the level and the congressman is being unfairly targeted. But that's not what the indictment suggests. Instead, it suggests that a serious investigation of Gaetz was somehow discovered by a man with a ludicrous idea, creating a spectacular but ultimately inconsequential sideshow.