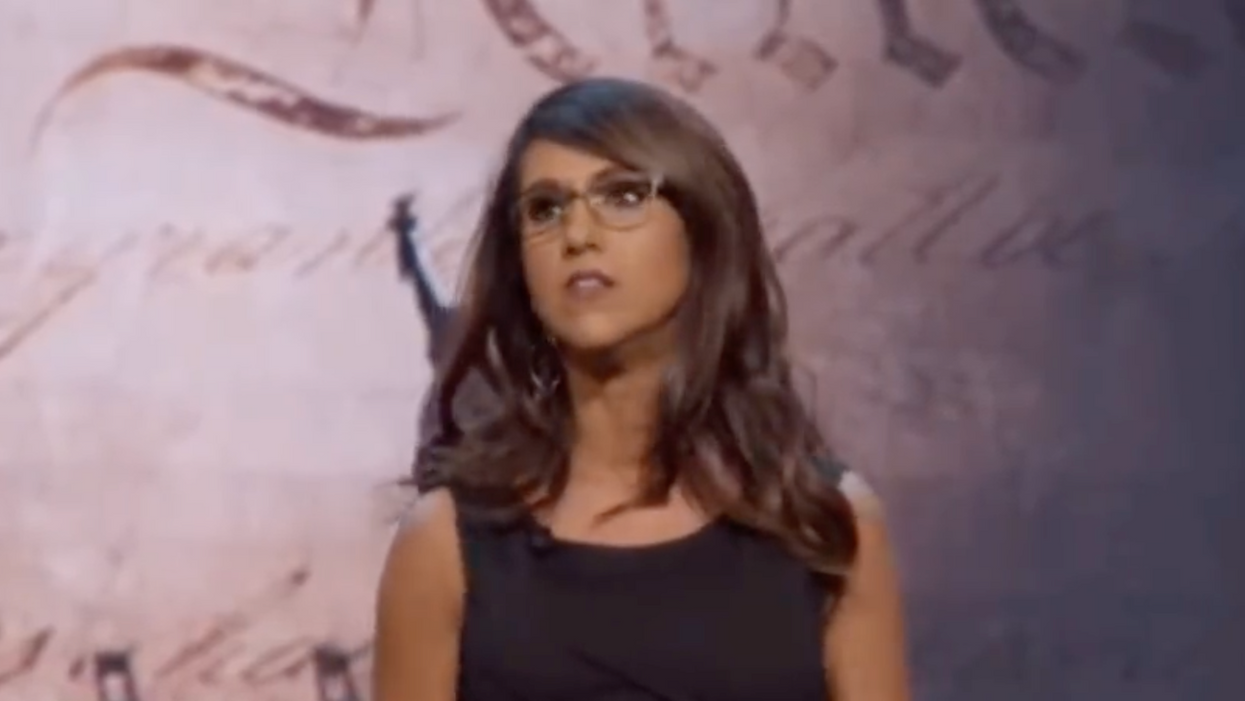 During the eight months that Rep. Lauren Boebert has served in the U.S. House of Representatives, it has been obvious that the far-right Colorado congresswoman and QAnon supporter has strong Christian nationalist leanings — and Boebert's Christian nationalism was very much in evidence over the weekend when she spoke at an event held by evangelical Pastor Andrew Wommack's Truth & Liberty Coalition. Boebert, during her inflammatory speech, argued that the United States' federal government needs to be taking orders from the church.

The 34-year-old Boebert told the evangelical crowd that God is on their side, not the side of Democrats — and that God will help them remove President Joe Biden and Vice President Kamala Harris from office.

"When we see Biden address the nation and the world and show more contempt and aggravation and aggression towards unvaccinated Americans than he does terrorists, we have a problem," Boebert declared. "And that's why I have articles of impeachment to impeach Joe Biden, Kamala Harris."

She called for God to remove "these un-righteous politicians."

Boebert continued, "We cannot take another 18 months, we cannot take another three years of this poor, failed leadership. We are sons and daughters of revolutionaries. They went to battle for a lot less. They took a stand for a lot less. And it's time we get involved. I need you involved in every local level. I need you speaking up. I need the world to hear your voice. You know the word of God, and you know that there is power in your words, that the world was framed by words. You have the Lord God Almighty on your side. I need you to use your voice and speak."

Boebert called for a government run by "righteous men and women of God," obviously meaning far-right White evangelicals — and she wasn't the least bit subtle.

People for the American Way's Right Wing Watch tweeted video of Boebert's disturbing speech. Founded in 1980 by liberal television producer Norman Lear — who is now 99 and is famous for sociopolitical 1970s sitcoms like "All in the Family," "Good Times" and "The Jeffersons" — People for the American Way has spent 41 years fighting what has historically been called "the Christian Right" or "the Religious Right" but is often described as "Christian nationalism" these days.

Here are some of the reactions to Boebert's speech:

@RightWingWatch I am so angry to hear this. This damages the Christian faith in ways beyond our imagination.
— HappyJax (@HappyJax) 1631547993.0

@RightWingWatch I guess she missed that day in school when they taught about the separation of Church and State.
— PJS (@PJS) 1631549728.0

@RightWingWatch Similarly, Article III, Section 5 declares, "No law shall be made respecting an establishment of re… https://t.co/LLVZuUeBjQ
— 🗽FL Empire 🇺🇸🇺🇸🇺🇸 (@🗽FL Empire 🇺🇸🇺🇸🇺🇸) 1631552627.0