'Wait times can now be measured in days': How non-COVID patients are paying the price for the Delta surge 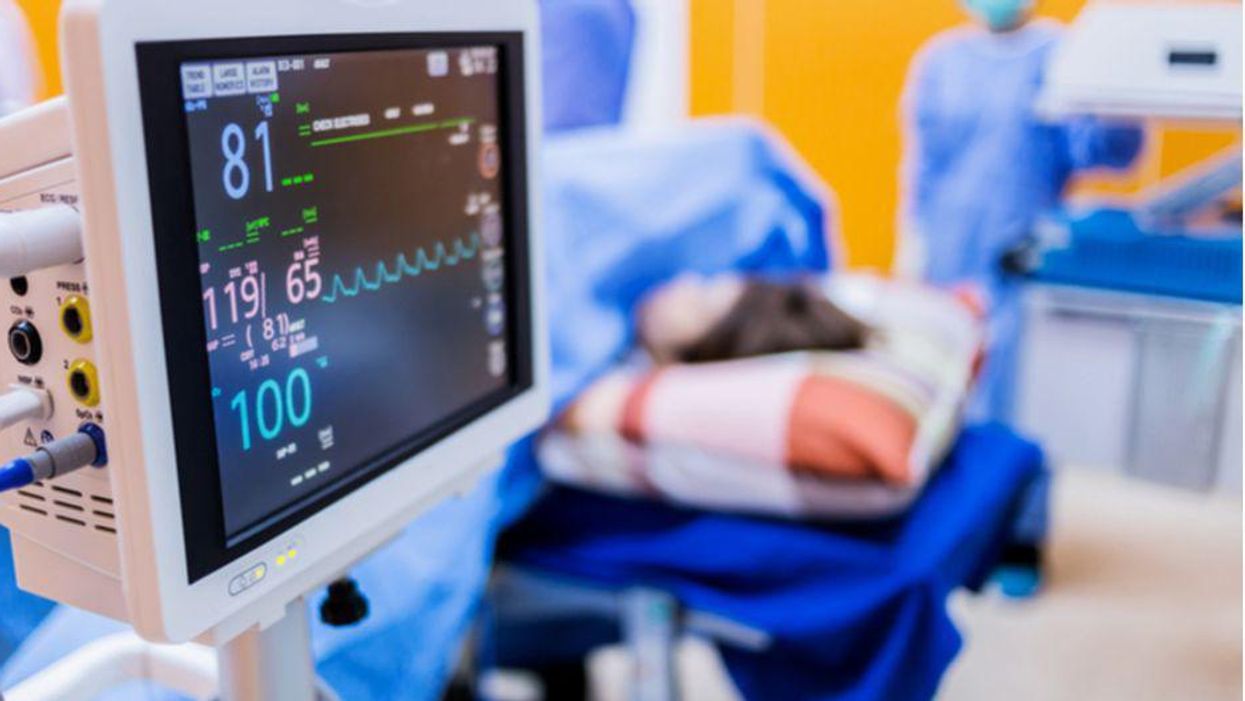 This was first published by ProPublica, a Pulitzer Prize-winning investigative newsroom. Sign up for The Big Story newsletter to receive stories like this one in your inbox.

What first struck Nathaniel Osborn when he and his wife took their son, Seth, to the emergency room this summer was how packed the waiting room was for a Wednesday at 1 p.m.

The Florida hospital's emergency room was so crowded there weren't enough chairs for the family to all sit as they waited. And waited.

Hours passed and 12-year-old Seth's condition worsened, his body quivering from the pain shooting across his lower belly. Osborn said his wife asked why it was taking so long to be seen. A nurse rolled her eyes and muttered, “COVID."

Seth was finally diagnosed with appendicitis more than six hours after arriving at Cleveland Clinic Martin Health North Hospital in late July. Around midnight, he was taken by ambulance to a sister hospital about a half-hour away that was better equipped to perform pediatric emergency surgery, his father said.

But by the time the doctor operated in the early morning hours, Seth's appendix had burst — a potentially fatal complication.

As the nation's hospitals fill and emergency rooms overflow with critically ill COVID-19 patients, it is the non-COVID-19 patients, like Seth, who have become collateral damage. They, too, need emergency care, but the sheer number of COVID-19 cases is crowding them out. Treatment has often been delayed as ERs scramble to find a bed that may be hundreds of miles away.

Some health officials now worry about looming ethical decisions. Last week, Idaho activated a “crisis standard of care," which one official described as a “last resort." It allows overwhelmed hospitals to ration care, including “in rare cases, ventilator (breathing machines) or intensive care unit (ICU) beds may need to be used for those who are most likely to survive, while patients who are not likely to survive may not be able to receive one," the state's website said.

The federal government's latest data shows Alabama is at 100% of its intensive care unit capacity, with Texas, Georgia, Mississippi and Arkansas at more than 90% ICU capacity. Florida is just under 90%.

It's the COVID-19 cases that are dominating. In Georgia, 62% of the ICU beds are now filled with just COVID-19 patients. In Texas, the percentage is nearly half.

To have so many ICU beds pressed into service for a single diagnosis is “unheard of," said Dr. Hasan Kakli, an emergency room physician at Bellville Medical Center in Bellville, Texas, about an hour from Houston. “It's approaching apocalyptic."

In Texas, state data released Monday showed there were only 319 adult and 104 pediatric staffed ICU beds available across a state of 29 million people.

Hospitals need to hold some ICU beds for other patients, such as those recovering from major surgery or other critical conditions such as stroke, trauma or heart failure.

“This is not just a COVID issue," said Dr. Normaliz Rodriguez, pediatric emergency physician at Johns Hopkins All Children's Hospital in St. Petersburg, Florida. “This is an everyone issue."

While the latest hospital crisis echoes previous pandemic spikes, there are troubling differences this time around.

Before, localized COVID-19 hot spots led to bed shortages, but there were usually hospitals in the region not as affected that could accept a transfer.

Now, as the highly contagious delta variant envelops swaths of low-vaccination states all at once, it becomes harder to find nearby hospitals that are not slammed.

Recently, Dr. Cedric Dark, a Houston emergency physician and assistant professor of emergency medicine at Baylor College of Medicine, said he saw a critically ill COVID-19 patient waiting in the emergency room for an ICU bed to open. The doctor worked eight hours, went home and came in the next day. The patient was still waiting.

Holding a seriously ill patient in an emergency room while waiting for an in-patient bed to open is known as boarding. The longer the wait, the more dangerous it can be for the patient, studies have found.

Not only do patients ultimately end up staying in the hospital or the ICU longer, some research suggests that long waits for a bed will worsen their condition and may increase the risk of in-hospital death.

On Aug. 21, around 11:30 a.m., Michelle Puget took her adult son, Daniel Wilkinson, to the Bellville Medical Center's emergency room as a pain in his abdomen became unbearable. “Mama," he said, “take me to the hospital."

Wilkinson, a 46-year-old decorated Army veteran who did two tours of duty in Afghanistan, was ushered into an exam room about half an hour later. Kakli, the emergency room physician there, diagnosed gallstone pancreatitis, a serious but treatable condition that required a specialist to perform a surgical procedure and an ICU bed.

In other times, the transfer to a larger facility would be easy. But soon Kakli found himself on a frantic, six-hour quest to find a bed for his patient. Not only did he call hospitals across Texas, but he also tried Kansas, Missouri, Oklahoma and Colorado. It was like throwing darts at a map and hoping to get lucky, he told ProPublica. But no one could or would take the transfer.

By 2:30 p.m., Wilkinson's condition was deteriorating. Kakli told Puget to come back to the hospital. “I have to tell you," she said he told her, “Your son is a very, very sick man. If he doesn't get this procedure he will die." She began to weep.

Kakli went on Facebook and posted an all-caps plea to physician groups around the nation: “GETTING REJECTED BY ALL HOSPITALS IN TEXAS DUE TO NO ICU BEDS. PLEASE HELP. MESSAGE ME IF YOU HAVE A BED. PATIENT IS IN ER NOW. I AM THE ER DOC. WILL FLY ANYWHERE."

The doctor tried Michael E. DeBakey VA Medical Center in Houston for a second time. This time he found a bed.

Around 7 p.m., Wilkinson, still conscious but in grave condition, was flown by helicopter to the hospital. He was put in a medically induced coma. Through the night and into the next morning, medical teams worked to stabilize him enough to perform the procedure. They could not.

Doctors told his family the internal damage was catastrophic. “We made the decision we had to let him go," Puget said.

The story was first reported by CBS News. Kakli told ProPublica last week he still sometimes does the math in his head: It should have been 40 minutes from diagnosis in Bellville to transfer to the ICU in Houston. “If he had 40 minutes to wait instead of six hours, I strongly believe he would have had a different outcome."

Another difference with the latest surge is how it's affecting children.

Last year, schools were closed, and children were more protected because they were mostly isolated at home. In fact, children's hospitals were often so empty during previous spikes they opened beds to adult patients.

Now, families are out more. Schools have reopened, some with mask mandates, some without. Vaccines are not yet available to those under 12. Suddenly the numbers of hospitalized children are on the rise, setting up the same type of competition for resources between young COVID-19 patients and those with other illnesses such as new onset diabetes, trauma, pneumonia or appendicitis.

Pediatric transfers are not yet as fraught as adult ones, Santiago said, but it does take more calls than it once did to secure a bed.

Seth Osborn, the 12-year-old whose appendix burst after a long wait, spent five days and four nights in the hospital as doctors pumped his body full of antibiotics to stave off infection from the rupture. The typical hospitalization for a routine appendectomy is about 24 hours.

The initial hospital bill for the stay came to more than $48,000, Nathaniel Osborn said. Although insurance paid for most of it, he said the family still borrowed against its house to cover the more than $5,000 in out-of-pocket costs so far.

While the hospital system where Seth was treated declined to comment about his case because of patient privacy laws, it did email a statement about the strain the pandemic is creating.

“Since July 2021, we have seen a tremendous spike in COVID-19 patients needing care and hospitalization. In mid-August, we saw the highest number of patients hospitalized with COVID-19 across the Cleveland Clinic Florida region, a total of 395 COVID-19 patients in four hospitals. Those hospitals have approximately 1,000 total beds," the email to ProPublica said. “We strongly encourage vaccination. Approximately 90% of our patients hospitalized due to COVID-19 are unvaccinated."

On Sunday, The Washington Post reported that a hospital in Alabama called 43 others across three states before finding a bed for Ray DeMonia, a critically ill heart patient who later died. In his obituary his family wrote: “In honor of Ray, please get vaccinated if you have not, in an effort to free up resources for non COVID related emergencies. ... He would not want any other family to go through what his did."

The high school history teacher said he likes to stay upbeat and apolitical in his social media musings, posting about Florida wildlife preservation and favorite books. But on Sept. 7, he tweeted: “My 12-year-old had appendicitis. The ER was overwhelmed with unvaccinated Covid patients and we had to wait 6+ hours. While waiting, his appendix ruptured and had to spend 5 days in hospital. ... So yeah, your decision to not vaccinate does affect others."

It was retweeted 34,700 times, with 143,000 likes. Most comments were sympathetic and wished his child a speedy recovery. Some, though, went straight to hate, apparently triggered by his last line. He was attacked personally and accused of making up the story: “Good try with the guilt, jerk."

Osborn, who is vaccinated, as are his wife and son, told ProPublica he only shared Seth's story on Twitter to encourage vaccinations.

“I have no ill will towards the hospitals or the care received at either hospital," he said this week, “but had these hospitals not been so crowded with COVID patients, we wouldn't have had to wait so long and perhaps my son's appendix would not have burst."