The signs are emerging that Brazil's Bolsonaro will follow in Trump's anti-democratic footsteps: report 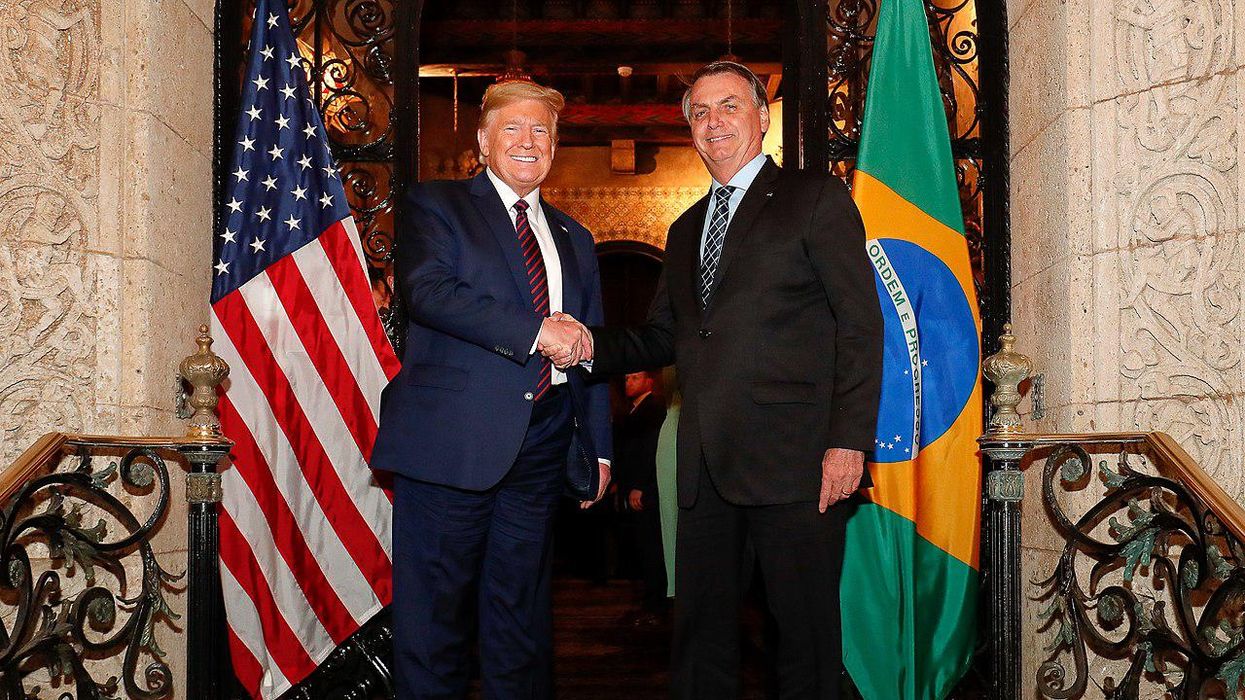 Many foreign leaders were delighted when now-President Joe Biden defeated Donald Trump in the United States' 2020 election, including some right-wing conservatives. U.K. Prime Minister Boris Johnson, a member of the Conservative Party, was quick to congratulate Biden and stressed that he looked forward to working with him. But far-right Brazilian President Jair Bolsonaro, who is running for reelection, was disappointed by Trump's loss — and according to the Daily Beast, he is hoping that Trump will visit Brazil and speak at one of his rallies.

In an article published by the Beast this week, reporters Asawin Suebsaeng, Will Sommer and Adam Rawnsley explain, "This summer, according to two people with knowledge of the matter, Trump told confidants that he's open to publicly endorsing Bolsonaro's reelection, potentially at a mega-rally in Brazil where he and Bolsonaro could appear together side-by-side, to rail against what they each deem undesired election outcomes. Bolsonaro, who is widely expected to decisively fail in his reelection bid next year, has been preemptively spreading groundless claims of election 'fraud' — a strategy jarringly reminiscent of Trump's failed coup in the United States."

Bolsonaro once remarked that the problem with Brazil's infamous military junta of the 1960s was that it wasted time torturing people when it should have been killing them. During a May 1999 interview, Bolsonaro said he would stage a military coup if he ever became president.

Some of Bolsonaro's supporters have even used the slogan "Make Brazil Great Again."

"President Bolsonaro's son Eduardo, who serves as a member of the Brazilian parliament and has been described in the U.S. press as the Donald Trump, Jr. of Brazil, recently met with Trump, according to a post on the Brazilian lawmaker's Instagram account," Suebsaeng, Sommer and Rawnsley note. "Last month, the younger Bolsonaro posted pictures of himself at Trump Tower standing next to the former president. Bolsonaro, whose infant daughter posed alongside the ex-president in an autographed MAGA ball cap, said he 'took the opportunity to invite (Trump) to come to our country when he sees fit, maybe in a CPAC-Brazil.'"

Another thing Trump and Bolsonaro have in common is a history of downplaying the severity of the COVID-19 pandemic, which, according to Johns Hopkins University in Baltimore, has killed more than 4.6 million people worldwide — including over 654,000 in the United States and more than 585,000 in Brazil. Next to the U.S., Brazil has the world's highly COVID-19 death count.

Like Trump, Bolsonaro was infected with COVID-19 but survived. And Bolsonaro's opponents are arguing that his failed COVID-19 response is one of the reasons why he should be voted out of office next year.

"Eduardo Bolsonaro has become an emissary between his father and the American far-right," Suebsaeng, Sommer and Rawnsley observe. "In 2019, the younger Bolsonaro joined a sort of international populist movement founded by Bannon, as the representative for South America…. Eduardo Bolsonaro has even courted less internationally known Trump allies in the United States like MyPillow CEO and staunch Trump ally Mike Lindell. In August, Bolsonaro spoke at Lindell's ill-fated 'cyber-symposium' event, a bumbling attempt to prove the false conspiracy theory that the 2020 election was stolen from Trump."

Bolsonaro's critics, meanwhile, have been warning that democracy itself is on the line in Brazil but are hoping that the country's system of checks and balances will hold up.