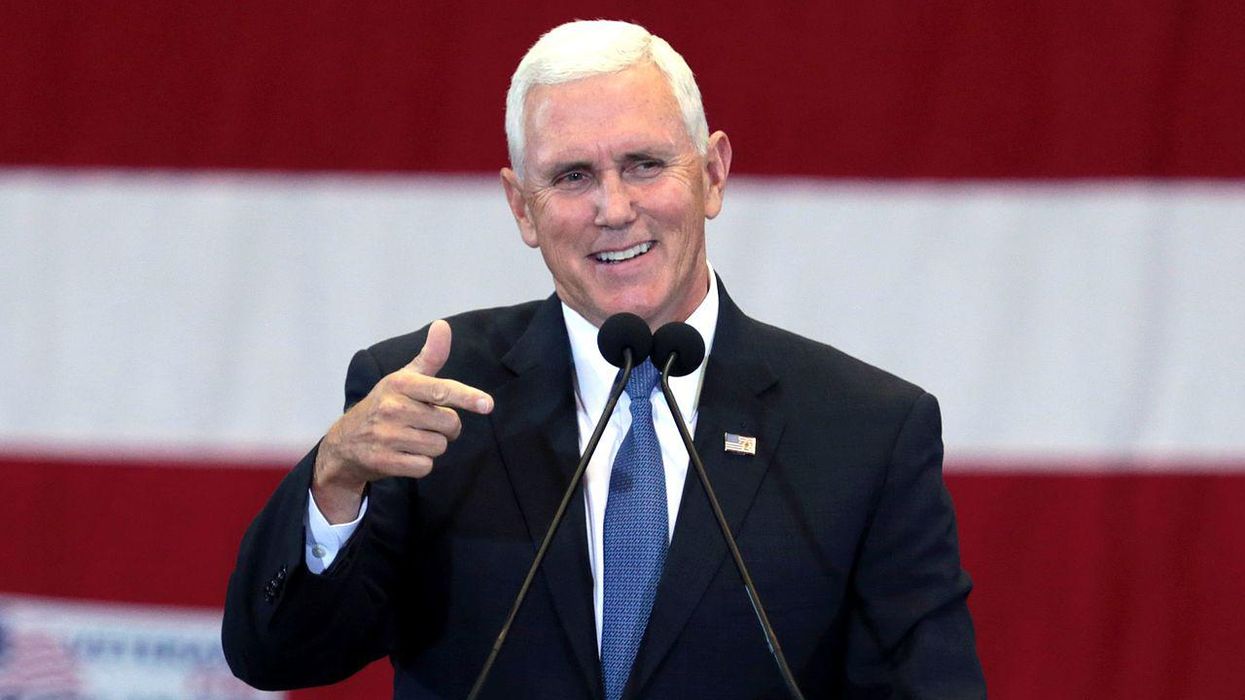 Mike Pence speaking at a rally for Donald Trump at the Phoenix Convention Center in Phoenix, Arizona in 2016, Gage Skidmore
Alex Henderson
September 15, 2021

In their forthcoming book "Peril," veteran journalist Bob Woodward — who is famous for his reporting on Watergate with Washington Post colleague Carl Bernstein during the 1970s — and reporter Robert Costa examine former President Donald Trump's final months in the White House. The reporting included new details on Trump's efforts to pressure former Vice President Mike Pence to overturn the 2020 presidential election results on January 6. Liberal Washington Post columnist Greg Sargent examines Woodward and Costa's reporting on Pence this week in his column, arguing that it's wrong to paint Pence as a heroic figure.

"Ever since Mike Pence announced, on January 6, that he lacked power to help Donald Trump overturn the 2020 election in Congress, it's been widely suggested that the vice president was one of the few heroes in this ugly tale," Sargent explains. "But new revelations in the forthcoming book by Post reporters Bob Woodward and Robert Costa cast doubt on this account."

According to Sargent, "The key details concern Trump's relentless pressure on Pence to help subvert the Electoral College count on January 6, pursuant to the vice president's role as president of the Senate. The day before, in the Oval Office, Trump angrily told Pence that various people believed he did have the power to somehow derail the count."

On January 5, Woodward and Costa report in their book, Pence told Trump, "I've done everything I could and then some to find a way around this. It's simply not possible." But Trump refused to accept that explanation, telling his then-vice president, "No, no, no! You don't understand, Mike. You can do this. I don't want to be your friend anymore if you don't do this."

Sargent writes, "I've done everything I could and then some — that's at odds with the portrayal of Pence as a heroic defender of the Constitution and the rule of law who bravely rebuffed Trump's corrupt pressure on him to help destroy them both. Obviously, Pence might have been exaggerating his efforts to placate Trump. But notably, the book also reports that Pence privately said the same to former Vice President Dan Quayle, who basically had to persuade him he had no power to help Trump."

Back in January 1993, Quayle was near the end of his four years as President George H.W. Bush's vice president when he oversaw Congress' certification of then-incoming President Bill Clinton's Electoral College victory in the 1992 election.

Quayle, as vice president, was president of the U.S. Senate — and by the end of the month, after Clinton's inauguration, that position was held by the new vice president, former Sen. Al Gore.

In "Peril," Woodward and Costa report that Pence repeatedly asked Quayle if there was any way he would be able to prevent the certification of now-President Joe Biden's Electoral College victory on January 6. Quayle told Pence, "Mike, you have no flexibility on this. None. Zero. Forget it. Put it away."

Pence, according to Woodward and Costa, told Quayle, "You don't know the position I'm in" — to which Quayle responded, "I do know the position you're in. I also know what the law is. You listen to the parliamentarian. That's all you do. You have no power."

Woodward and Costa's reporting in "Peril," according to Sargent, indicates that Pence didn't prevent Biden's Electoral College certification on January 6 because he didn't want to or because it was the right thing to do, but because he couldn't.

Sargent, in his column, points out that "Peril" offers valuable information for House Speaker Nancy Pelosi's select committee on the January 6 insurrection. And Sargent interviewed one of the committee's Democratic members: Rep. Jamie Raskin of Maryland.

Raskin told Sargent, "We need to look and see how far things went in 2020 in order to determine what correctives we need to make for 2024…. Trump wanted to exploit every vulnerability and booby trap in the Electoral College."

The Maryland Democrat is obviously worried that another "coup" will be attempted in a future U.S. presidential election.