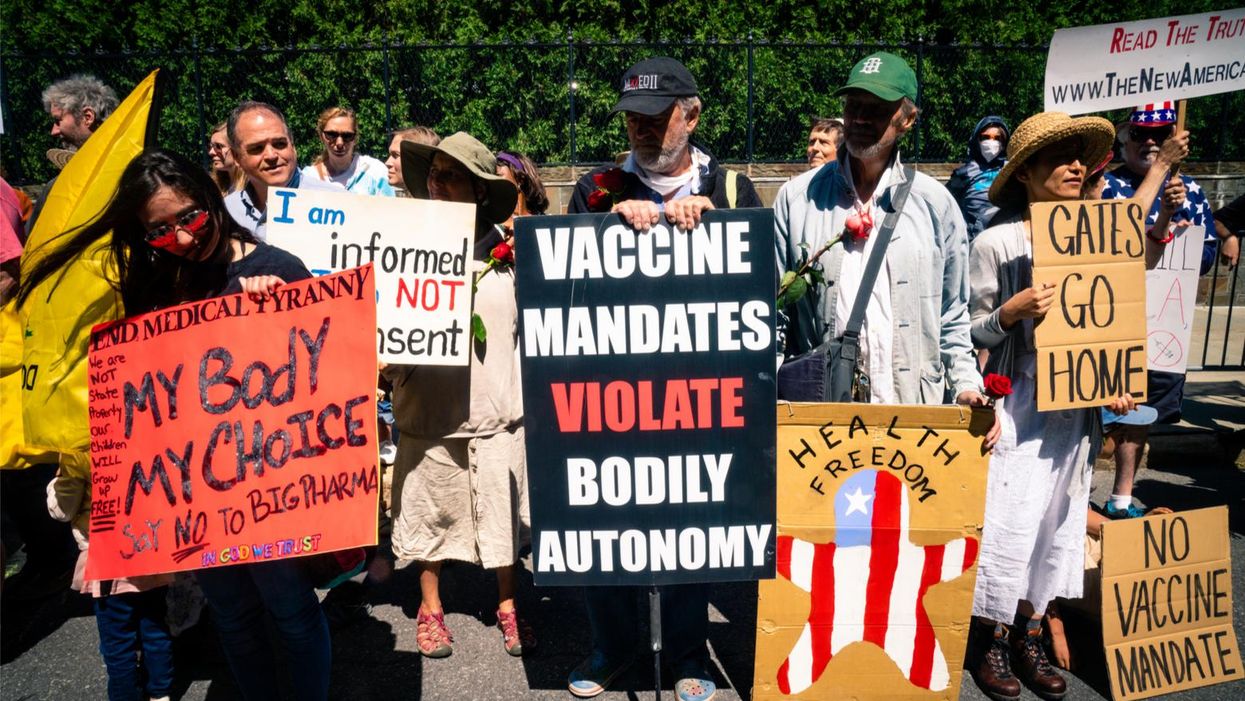 Assuming we don't all die of the Omega! Omega! Omega! COVID-19 strain sometime before the year 2050, it's easy enough to imagine future archeologists rooting through our scattered, bleached bones seeking explanations for why TruckNutz suddenly disappeared from the fossil record in 2040 or so. Eventually, they'll discover that the Americanicus dumbfuckerus branch of the great apes' evolutionary tree suddenly shriveled up, died, and was employed for a time as God's go-to backscratcher before He noticed it gave Him a really gross rash.

Sometimes I wonder how Charles Darwin, the inventor of evil-ution, would have reacted to what's going on these days in Florida and other boggy redoubts. After all, there's a certain piquant irony to the fact that the very people who don't believe in natural selection are eagerly proving its validity every day.

The latest? Well, it's not enough that anti-vaxxers kill themselves with their scientifically ignorant rejection of vaccines. They've upped the ante by making non-COVID-19-related procedures and emergencies problematic, too.

With nearly 60% of the eligible U.S. population fully vaccinated, most of the nation's blood supply is now coming from donors who have been inoculated, experts said. That's led some patients who are skeptical of the shots to demand transfusions only from the unvaccinated, an option blood centers insist is neither medically sound nor operationally feasible.
"We are definitely aware of patients who have refused blood products from vaccinated donors," said Dr. Julie Katz Karp, who directs the blood bank and transfusion medicine program at Thomas Jefferson University Hospitals in Philadelphia.

Sheesh. I may have to hire an assistant to face-palm me every 10 to 15 minutes so that I don't have to stop typing.

It's no exaggeration to say that anti-vaxxers are literally destroying this country right now, in that they're endangering and killing its citizens—both the vaxxed and un-vaxxed. One of these pestilent pod people has infiltrated my own family. I'd pray for her, but 1) I don't believe in God, per se, and 2) if God does exist, He's obviously made preventing COVID-19 a low priority, somewhere behind sopping up every last bit of moisture in the American West and killing off enough organ donors to allow Dick Cheney to install a new heart every time he changes the smoke detector batteries in his bunker.

You might think, all things being equal, that you'd want blood with COVID-19 antibodies in it. But some people are apparently more worried about getting vaccine "components" mixed in with their pure alpha-man blood than dying on an operating table. And according to Dr. Michael Busch, director of the Vitalant Research Institute, approximately 90% of the blood available for transfusions currently has COVID-19 antibodies in it, either because donors were vaccinated or they previously had COVID-19.

As a result, these requests are impossible to honor. But that hasn't stopped people from pressing their concerns.

Many patients expressing concerns have been influenced by rampant misinformation about vaccines and the blood supply, said [Dr. Geeta] Paranjape, [medical director at Carter BloodCare]. "A lot of people think there's some kind of microchip or they're going to be cloned," she said. Other patients have balked at getting blood from people previously infected with COVID, even though federal guidance greenlights donations two weeks after a positive test or the last symptom fades.

They're afraid they're going to be cloned? Cloned?

Are we sure that's not already happening? It seems to me there are lots of people in this country who were clearly gestated in bathtubs full of homemade gin. And they're afraid of the vaccine because they think it has computer chips in it.

I can't even with these people. It may be too late to reach many of them, but here's an idea: Can we at least make sure we teach our kids what science is? Because most Americans' knowledge of the subject appears to have been drawn from Spider-Man movies.

That's all I ask. Until then, Darwin will be tucking into hot, steamy Jiffy Pop on his tricked-out La-Z-Boy for the foreseeable future.