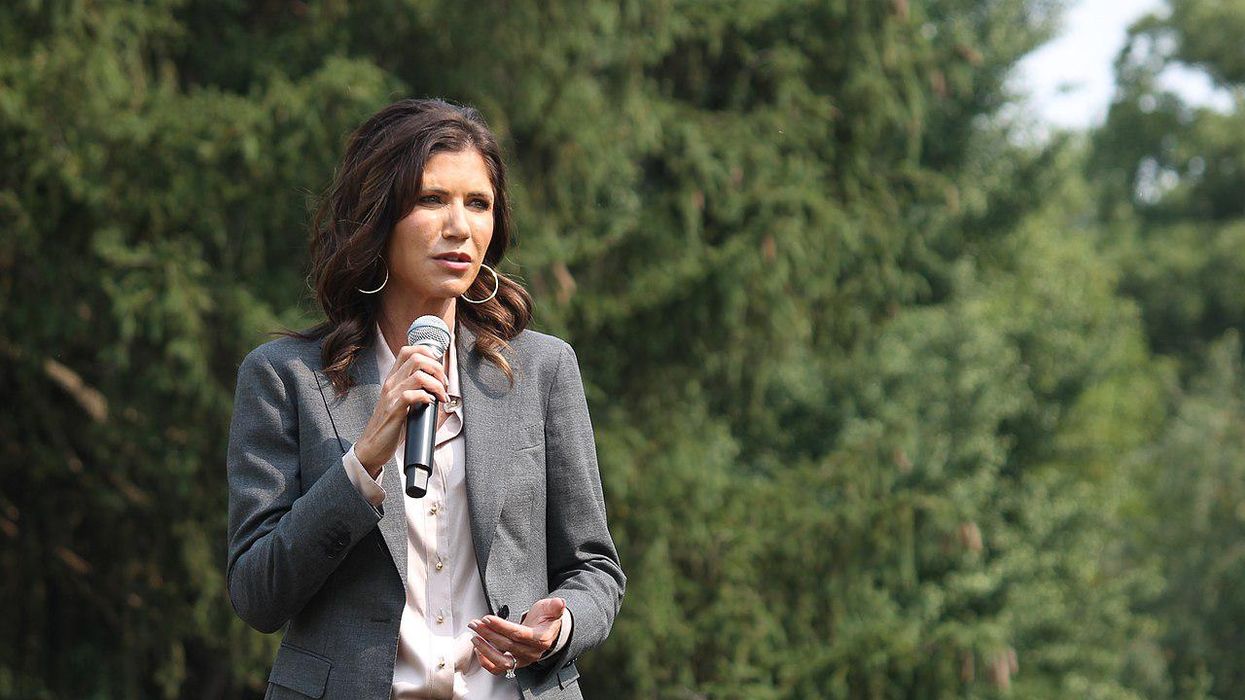 Two years in a row, medical experts warned South Dakota Gov. Kristi Noem that the annual Sturgis Motorcycle Rally could become a superspreader event if COVID-19 precautions and social distancing measures weren't taken. The far-right Republican governor ignored the warnings during both Sturgis 2020 and Sturgis 2021, and the highly infectious COVID-19 Delta variant has been going from bad to worse in South Dakota following this year's event.

In an article published by the Daily Beast on August 26, reporters Jasleen Arneja and Maia Majumder note how dire the situation is in Meade County — where the Sturgis Motor Cycle Rally takes place.

The journalists explain, "In western South Dakota's Meade County, more than one in three COVID-19 tests are currently returning positive — and over the last three weeks, seven-day average case counts have increased by 3400%. This exponential growth in cases is likely attributable to the 81st Sturgis Motorcycle Rally, which drew an estimated half a million visitors to Meade County and its environs from August 6 through 15, potentially acting as a superspreader event."

The Delta variant is potentially deadly all over the U.S., but the current COVID-19 surge has been especially bad in red Sun Belt states with low vaccination rates. The crisis in South Dakota, however, has been occurring in a state that is many miles from the Sun Belt.

"While southern states have been the main drivers of this surge thus far, the recent spike in cases in South Dakota warrants special concern," Arneja and Majumder warn. "The state more broadly has witnessed a 686.8% increase in daily case counts over the past three weeks, currently more than ten times the nationwide rate. Meade County's post-Sturgis uptick is certainly a contributor to this state-level increase, but neighboring counties have experienced a sharp incline in cases, too—ranging from a 1900% increase in the past three weeks in Butte to a 1050% increase in Lawrence."

The reporters continue, "Those two counties are also key focal points for the rally, which is not, in reality, confined to Sturgis. And because the rally is widely attended by residents all across South Dakota, it's not surprising that counties further away — like Charles Mix County, which saw a 1500% increase — are experiencing an incline in cases too."

According to Arneja and Majumder, the 2021 Sturgis Motor Cycle Rally was "the perfect storm for a superspreader event across this region" because it was "a large gathering with no testing, no masks and no vaccination requirements."

"Though many but not all of the goings-on occurred outdoors and thus offered more protection against SARS-CoV-2 transmission than if they hadn't been, the South Dakota Department of Transportation reported that 525,768 vehicles entered Sturgis over the ten days of the rally," Arneja and Majumder observe. "The sheer number of people in attendance paired with a lack of additional precautions presented prime conditions for viral transmission."

Dr. Shankar Kurra, who serves as vice president of medical affairs at Monument Health in Rapid City, South Dakota, isn't surprised that the Sturgis Motor Rally turned out to be a superspreader event in 2021 just as it was in 2020.

Kurra told the Beast, "We knew this was going to happen. It happened last year. It was just playing a reboot of last year pretty much."

According to the Mayo Clinic, 48% of adults in South Dakota have been fully vaccinated for the COVID-19 coronavirus — compared to 67% in Vermont or 65% in Maine or Massachusetts. But in some South Dakota counties, the number is less than 48%.

"Sub-optimal vaccination rates across South Dakota are a fundamental factor in understanding the recent spike in cases," Arneja and Majumder observe. "In the United States, 51.6% of the total population is fully vaccinated, according to the CDC. But in Meade, only 38.3% of the total population is vaccinated. In nearby Lawrence County, the proportion of fully vaccinated residents is 37.4%, and at 26%, rates are lower yet in Butte (County)."