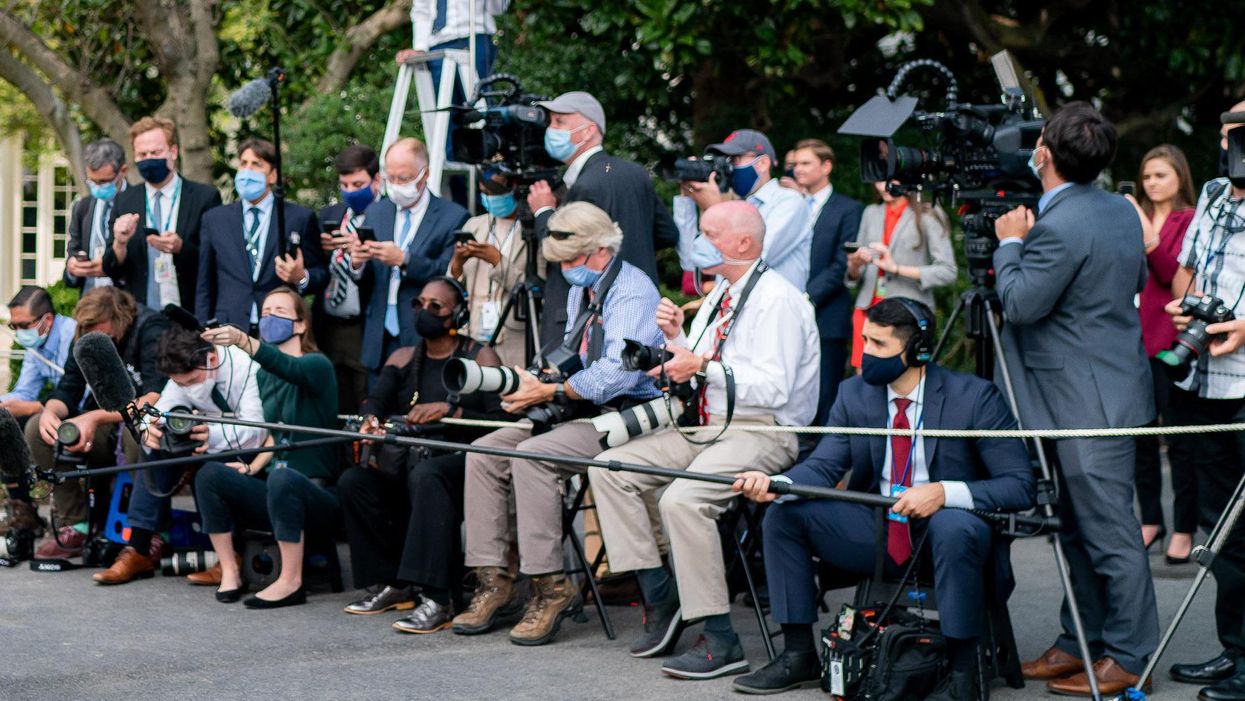 President Donald J. Trump is joined by White House Press Secretary Kayleigh McEnany as he speaks with reporters prior to departing the White House Tuesday, Sept. 15, 2020, for his trip to Pennsylvania.

For all the sophistication that goes into becoming a member of the Washington press corps, there are equal and startling degrees of naivete. That's the impression I got after reading a front page "news analysis" in the Sunday Times about the Republican Party's collective effort to "rewrite" the history of the former president's failed coup d'etat.

"Their new claims, some voiced from the highest levels of House Republican leadership, amount to a disinformation campaign being promulgated from the steps of the Capitol, aimed at giving cover to their party and intensifying the threats to political accountability," wrote political reporters Lisa Leher and Nicholas Fandos.

Their analysis does an admirable job of avoiding "bothsidesism." The closest they get to false equivalence is reporting House Speaker Nancy Pelosi's attitude toward House Minority Leader Kevin McCarthy, whom she called "a moron." "Anytime you mention his name, you're not getting an answer from me," Pelosi said. "Don't waste your time." Leher and Fandos knock down most, or much, of the GOP's "counterfactual counterattack." They put the focus where it should be. "The message is clear," they conclude. "Adherence to facts cannot overcome adherence to the party line."

There is some make-believe going on. They don't once use the word "lie" when that word would be accurate, appropriate and acceptable. They don't use the vocabulary of partisanship that any American reporter would deploy in a foreign setting, like "coup attempt." (They don't use words now commonly used by colleagues, like "insurrection" and "insurgency.") They also accept uncritically United States Senator John Cornyn's assurances that this is all normal politics, nothing to worry about. "I don't think anybody's going to be successful in erasing what happened. Everybody saw it with their own eyes and the nation saw it on television," Cornyn told Leher and Fandos.

So when I say there's an equal and startling degree of naivete, I'm not talking about the pretended naivete that goes into playing "bothsidesism." I'm talking about the real thing. I don't blame Leher and Fandos, though. There is something extraordinary about what the Republicans are doing. There is something unbelievable about it. They are not, however, just providing cover or avoiding political accountability. They are not just "rewriting history." They are, in a real sense, replacing shared reality with shared lies.

Why don't I blame Leher and Fandos? I could be wrong, but I don't think they know much about even lightly authoritarian subcultures. I'm basing this speculation on their LinkedIn profiles, which show them to be proud Ivy League graduates. Odds are, if you are white person who graduated from Penn and Harvard, respectively, before becoming a member of the Washington press corps, you did not come from, nor know much about, even lightly authoritarian subcultures. Unless you have spent sizable amounts of time in such subcultures, you probably can't recognize the Republicans are not lying to get away with something. They are lying because lying is their agenda. It isn't a means to an end. It's the means. It's the end. It's the whole political shebang.

Remember that the Republicans are lying about what happened on January 6, 2021. They are lying about the meaning, identity and character of American government. Donald Trump's supporters that day are not armed and angry paramilitaries. They are patriots and concerned citizens. They didn't riot. They rallied. They didn't threaten to overthrow the republic. They protested the injustice of a rigged election. The former president even went so far as to call an insurgent killed by police a "patriotic martyr" whose death was "premeditated." If this happened in Russia, American reporters would say Trump is making up excuses for a failed coup d'etat. But since this is Donald Trump instead of Vladimir Putin, they are calling it "adherence to the party line."

The Times revealed last week that the former president wanted the Department of Justice to declare the 2020 presidential election "corrupt" so that he and the "Republican Congressmen" could move forward with plans to overturn the election. The gambit failed, but hand-written notes by top Justice officials show intent by Trump and Republicans currently in office to undermine democracy. It's fair to think of their maneuvering now as a continuation of that intent to sabotage the republic. This is not about who wins and who loses. This is about the point of being an American.