Fox News contributor’s Afghanistan evacuation plan: 'Walk through the streets and kill everyone I see' 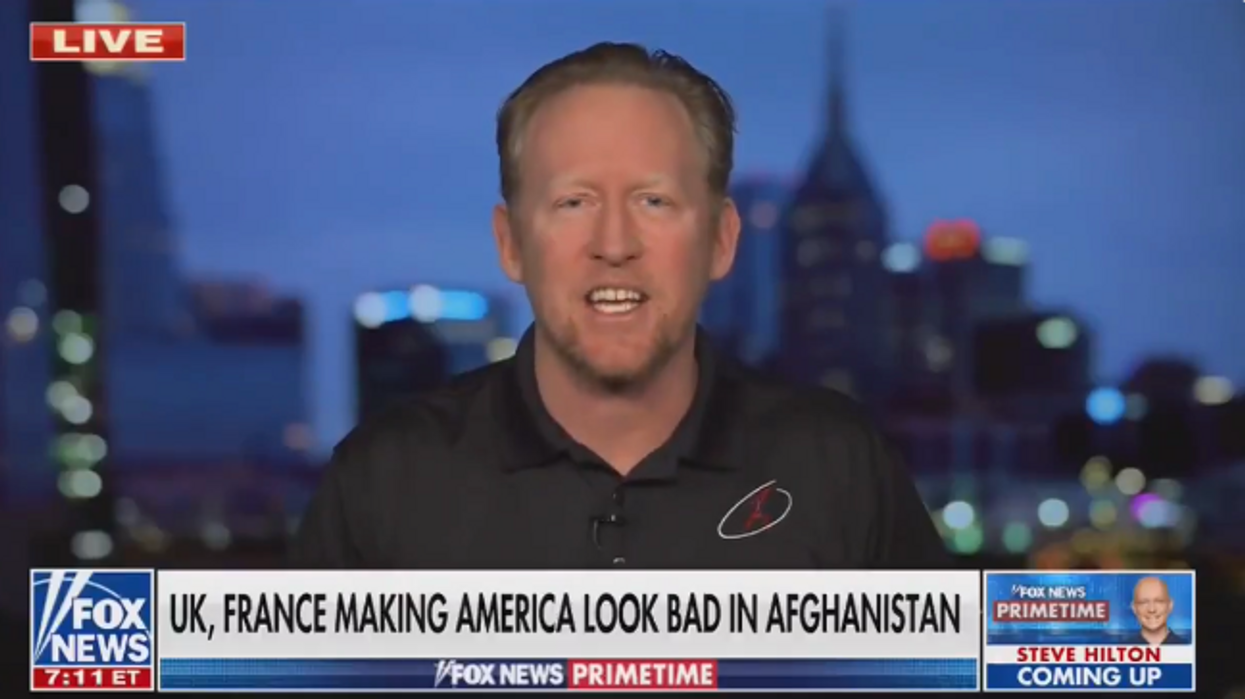 In the direct the wake of a 20-year failure that began with chest-thumping jingoism, reckless saber-rattling, and fatally naive notions about American exceptionalism, Fox News is still feeding us (or, rather, its viewers) brutal nonsense like this.

Donald Trump was elected in the first place because he sounded exactly like the drunk at the end of the bar who's read two Tom Clancy novels and several tweets about vaccines' supposed link to autism and so naturally sounds like the smartest guy in the room. After all, they're drunk, too, and he's just like them, except marginally more erudite because, you know, he's read two books and they haven't read any. (Honestly, all the think pieces about why Trump appeals to his base could probably be thrown in the trash. Occam's razor, folks. They like him because he's just as gutter stupid and racist as they are. I don't think it goes very far beyond that.)

So now, because Trump handed Joe Biden a footlong shit sub in the guise of a Taliban peace deal, our president gets to endure perpetual second-guessing from the Forever War network that played an outsized role in getting us in this mess in the first place.

But, hey, why not float one more simple, unnecessarily violent, hoo-rah solution to the current crisis? On Friday, Fox invited regular contributor Rob O'Neill on the air to argue for, erm, far more chaos. O'Neill is a motivational speaker and former Navy SEAL who ostensibly violated the SEALs' code of silence when he claimed—controversially—that he killed Osama bin Laden all by himself. So, yeah, that's the kind of deep thinker we're dealing with here.

O'NEILL: "I don't want to be in charge, but if I was—oh, I want to get the Americans? Cool. Give me nine guys. I'm gonna walk through the streets, and I'm gonna kill everyone I see, and I'm gonna grab the Americans. It is not difficult, but we have these people who are in charge that are a disgrace. I am amazed that there hasn't been at least 30 generals and admirals that haven't resigned or been fired today. But we won't because we have a commander in chief that was put there through whatever happened at 4 in the morning on election night."

WHOOOOOO! FUCK YEAH! It's just that simple. Go in with guns blazing, and to hell with anyone who complains! Let's make our exit from Afghanistan a microcosm of our foreign policy over the past 20 years. Sure, we've already evacuated 14,000 people since the end of July and 9,000 in the past week, but by all means, let's make this a thousand times harder!

It's nice to see that Fox has learned so much from its serial, bloodlust-inspired errors. Honestly, they should really shut down the network for at least a day to engage in some somber self-reflection. But why do that when you can once more tickle the taint of the "Kill 'em All and Let God Sort 'em Out" crowd?

Why do I get the feeling that the next Forever War is lurking around the corner waiting for a big, warm bear hug from Fox News and the so-called "liberal" press? Unfortunately, we'll never learn so long as ambulant war hard-ons like O'Neill are given time to spout their "patriotic" poison.