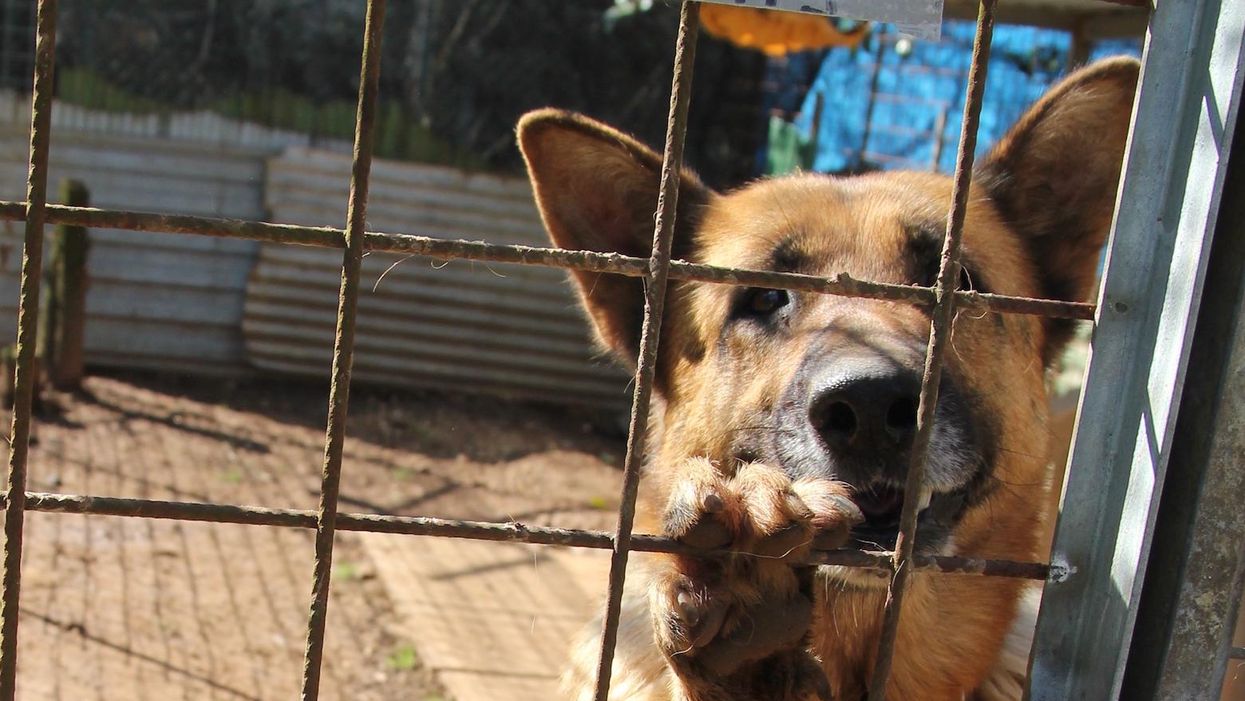 A German Sheppard jumps on a fence in Cordenons Italy on April 24, 2013. The shelter hosts roughly 20 dogs and 160 cats and is run by Italians in the local area with the help of donations from Americans at Aviano Air Base. (U.S. Air Force photo/2nd Lt. Allie M. Delury).
Stephen R. Kaufman
and
Independent Media Institute
August 31, 2021

When I went to medical school in the 1980s, it was standard practice to have students cut apart live dogs and other animals as part of the curriculum to teach them medical skills and concepts. Since then, these crude and cruel animal labs have been abandoned in medical schools and advanced surgical courses in favor of realistic human simulators that are more humane, cost-efficient and effective.

Apparently, the U.S. Department of Justice (DOJ) didn't get the memo about this.

According to federal contracts uncovered by taxpayer watchdog White Coat Waste Project (WCW), for which I serve as a volunteer medical adviser, the U.S. Marshals Service and the Federal Bureau of Investigation (both under the DOJ) have still been conducting "live tissue training" (LTT) courses. LTT is a euphemism for inflicting traumatic, life-threatening injuries on live animals to teach certain emergency medical procedures.

As DOJ funding panel Chairman Rep. Matt Cartwright (D-PA) and House Judiciary Committee member Rep. Ted Lieu (D-CA) astutely wrote in a letter to the DOJ in 2019, "LTT involves intentionally wounding live animals—usually stabbing, burning and shooting pigs and goats, and sometimes even dogs—and then having trainees crudely attempt to repair the damage… The use of animals for this training is expensive, obsolete, unnecessary and opposed by most Americans."

Many of the animals die from these traumatic injuries during the courses, and even those who survive are killed at the end.

The federal government's own studies show that human simulators like the Cut Suit, TraumaMan and TOMManikin that mimic human anatomy—even replicating bleeding and breathing—are more effective and economical than these outdated animal labs. Unlike the animals who are purchased, transported, dismembered, killed and thrown away after every LTT course, each simulator can train many students and can be reused time and again.

Even the U.S. Defense Department states in a 2016 report that LTT is "outdated and cost-prohibitive" and a 2017 report from the Pentagon says that "live tissue training options are not anatomically accurate." An Army-funded study at Yale concluded in 2015, "it is clear that simulated training costs less than live tissue training." And a 2020 U.S. military-funded study concluded that human simulation is an effective replacement for LTT.

Adding insult to injury, the DOJ has already spent taxpayers' money to purchase high-tech trauma simulators, but has continued to waste $131,793 on recent, completely unnecessary LTT courses anyway. The DOJ can't defend this waste and abuse, so instead it tried to keep the details a secret, and it took a federal lawsuit by White Coat Waste Project to pry away relevant documents from the agency.

A majority of Americans on both sides of the aisle want change and support doing away with this outdated practice. A June 2020 national survey of 1,000 taxpayers by Lincoln Park Strategies found that 63 percent of them—which included 66 percent of Republicans surveyed and 65 percent of Democrats surveyed—backed the effort to ask the DOJ to defund LTT.

As a physician, medical educator and animal advocate, I oppose this senseless waste of tax dollars and animals' lives. There needs to be political support from leaders like members of Congress and Attorney General Merrick Garland to take swift and decisive action to cut live tissue training from the curriculum.

Stephen R. Kaufman, MD, is a board-certified ophthalmologist and assistant professor at the Case Western Reserve University School of Medicine. He is also a volunteer medical adviser for the nonprofit White Coat Waste Project, which works to end taxpayer-funded animal experiments.