Salon's continuing investigation of Rep. Lauren Boebert's unexplained late-night tour of the U.S. Capitol on Dec. 12, 2020 — three weeks before the Colorado Republican became a member of Congress — has revealed further information. Earlier that day Boebert attended a march in Washington to support Donald Trump's baseless theory that the 2020 election was stolen. Evidence suggests that the Capitol tour itself — involving Boebert, her mother, her teenage son and a Capitol Police officer — apparently took place close to midnight, at an hour when the Capitol complex is normally completely shut down.

Amy Kremer, chairwoman of the pro-Trump group Women for America First, posted a tweet on Dec. 12 thanking Boebert for attending what some participants called the "Million MAGA March," which involved a number of street clashes between marchers, counter-protesters and police, four stabbings and at least 33 arrests.

As Salon reported last week, later that night Boebert gave what appears to be have been an unauthorized after-hours private tour of the Capitol building to a group of her family members. It remains unclear how this tour was arranged since everything about it fell outside the normal regulations regarding such visits, which require the presence of a member of Congress and a Capitol guide and must be scheduled between 9 a.m. and 3 p.m. on weekdays. There is no evidence that anyone accompanied Boebert and her family members, other than a single Capitol Police officer visible in one family photo posted to social media.

Metadata reviewed by Salon from Boebert's son's Instagram post of the Dec. 12 tour indicates the post was created at 11:53 p.m. That is consistent with a photo taken from the observation deck at the top of the Capitol, showing the National Mall completely deserted (it is open 24 hours a day), and showing the permit parking areas near Pennsylvania Avenue and Maryland Avenue, close to Union Square, almost entirely vacant. 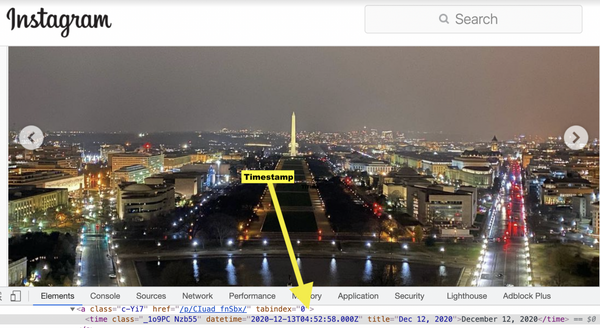 None of the Boebert group's photos from the tour show any other people present in the Capitol building, except for the single police officer who accompanied the group to the observation deck overlooking the city. It would seem reasonable to speculate that a highly-placed government official, either in Congress or the Trump White House, must have approved this extraordinary visit, but Salon has not found any evidence of that.

It's not surprising that Boebert attended the Dec. 12 march, given her involvement in several other pro-Trump rallies focused on the then-president's false claims of election fraud. According to a permit issued Jan. 4 by the Department of Interior, Boebert was scheduled to speak at the "Rally to Revival" event on Jan. 5, along with a long list of MAGAWorld celebrities, including retired Gen. Michael Flynn, Trump confidant Roger Stone and conspiracy theorist Alex Jones.

Boebert was scheduled to speak on the morning of Jan. 6, at the "Save America" event sponsored by Amy Kremer's organization, Women for America First, which had joined efforts with right-wing activist Ali Alexander's "Wild Protest." That event, of course, fueled and preceded the mob assault on the Capitol a few hours later.

USA Today reported on Jan. 4 that Boebert and another new member of Congress, Rep. Marjorie Taylor Greene, R-Ga., had "co-signed" the Jan. 6 "Stop the Steal" rally. Boebert was added to the speaker lineup on Dec. 29, shortly after the event website was launched. She did not in fact speak at the Jan. 6 rally, but as Salon had reported, attended the event that morning with her mother and can be seen in photographs with event organizers.

Leading up to those rallies, Boebert tweeted and almost immediately deleted "President Trump shouldn't pack up yet" on Dec. 30 and retweeted and then deleted a post from @MediaKane that said "BOOM...RISE UP!" with a link to a Gateway Pundit article titled "Report: 100+ GOP Lawmakers may Vote Against Stolen Election on January 6th" on Dec. 31.

Earlier, Boebert had attended the first "Stop the Steal" rally in D.C. on Nov. 14, according to a tweet from co-organizer Kylie Jane Kremer. Other incoming members of Congress present that day included Greene, Madison Cawthorn of North Carolina, Mary Miller of Illinois and Bob Good of Virginia, along with sitting Reps. Louie Gohmert of Texas and Mike Kelly of Pennsylvania. There were no U.S. senators or senators-elect in attendance.

The newly elected members were in Washington that week for freshman orientation that week. The day before that November protest, Boebert posted to her Parler account, "Orientation today at the United States House of Representatives. Going to make Colorado proud!" with a photo of herself in the House chamber.