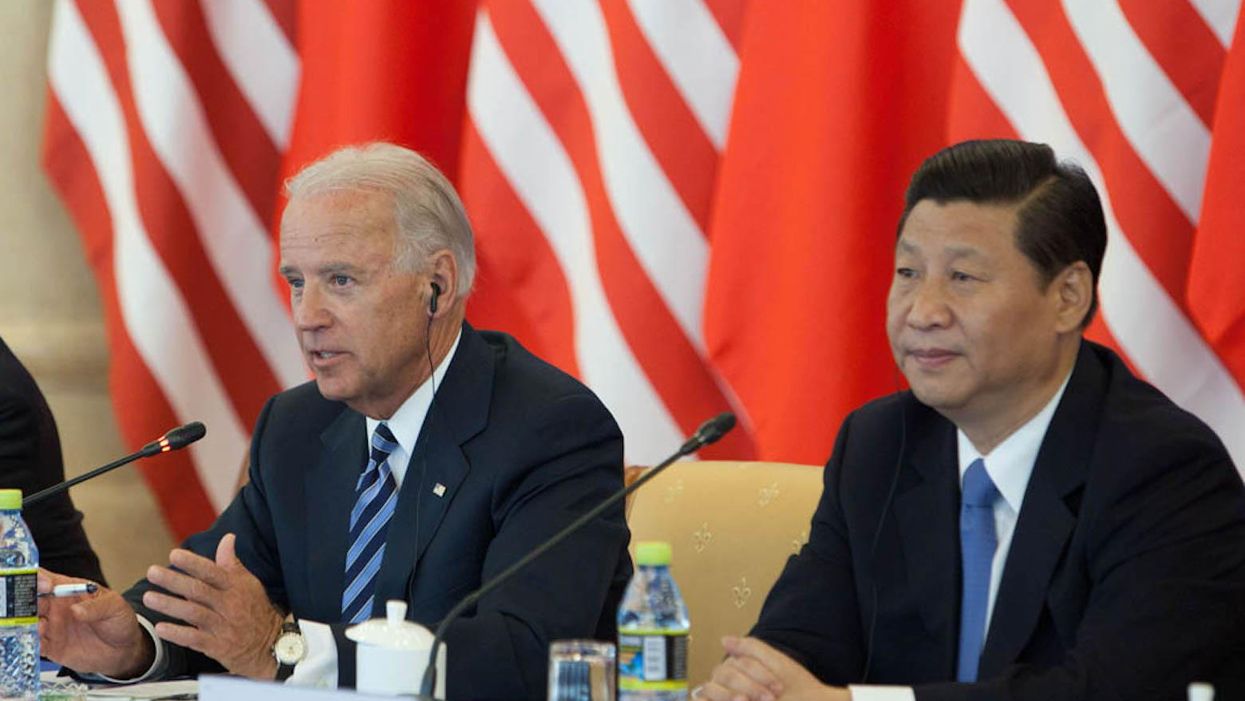 We look at the situation in Afghanistan, and pressure on Biden to stay longer, with CodePink co-founder Medea Benjamin, who for years has called for an end to the longest war in U.S. history. "We didn't want it to end like this, and there should have been better planning in terms of getting people out of the country, but we were very clear we never wanted the U.S. to go in to begin with," says Benjamin. She also warns the end of the War in Afghanistan will encourage the Biden administration to pour more money and resources into a rivalry with China. "It is a delusional idea that we should be focusing on China as an enemy," she says.

AMY GOODMAN: This is Democracy Now!, democracynow.org, The War and Peace Report. I'm Amy Goodman, as we continue to look at the U.S. withdrawal from Afghanistan and the ending of America's longest war with leading antiwar activist Medea Benjamin, co-founder of CodePink. For decades, she has been dragged out of congressional hearings, presidential speeches, political conventions by security as she and others have called for peace. President Biden wants to end evacuations in Afghanistan by the August 31st deadline but faces pressure to stay longer.

Medea, if you can start there, to talk about your response to the focus of all the media on what is absolutely the chaos and catastrophe at this point in Kabul for so many Afghans? But you have always widened the lens. For decades, you have been protesting the U.S. War in Afghanistan. Is this how you think it should end?

MEDEA BENJAMIN: Of course, we didn't want it to end like this, and there should have been better planning in terms of getting people out of the country, but we were very clear we never wanted the U.S. to go in to begin with. And every single year, we kept saying, "Get out."

It was fascinating listening to Bilal and him talking about all of the corruption inside Afghanistan. And I just kept thinking of this cash cow that has been the War in Afghanistan, that we have been fighting against all these years — we also got dragged out of meetings of shareholder, from Halliburton to General Dynamics — to think of all the companies that profited from this war and how they have been the ones who have kept the war going by putting their money into lobby groups. You just look at General Dynamics, Boeing, Raytheon, and their spending of $34 million in this year alone on lobbying our government.

We have to find a way, Amy, that we reflect on what happened over these 20 years and look at these contractors, that provide all of the logistics and have privatized the U.S. military. In fact, we have had more U.S. contractors in Afghanistan, at many times during these 20 years, than U.S. soldiers. So, I think there's a lot of reckoning to be done. And I hope that we will be able, once this phase is over, which is chaotic and horrific — we will be able to look at who actually profited, where did all this money go, why did it happen, and how are we going to stop it from happening again.

AMY GOODMAN: So, Afghanistan has something like a trillion dollars' worth of minerals, and there is a global fight now for countries to position themselves. You have been warning about the U.S. beefing up their anti-China rhetoric. Something that's not getting a lot of attention right now is Vice President Harris is on a South Asian trip. She was just in Singapore. Then she flew to Vietnam. She has warned about China in the South China Sea. Can you talk about the U.S.-China brinksmanship that's going on right now?

MEDEA BENJAMIN: The tragedy is that the U.S. leaving Afghanistan, for the Biden administration, is a chance to focus on what they call our main adversary, which is China. It justifies this continual, gargantuan Pentagon budget that eats up so much of our resources. And it is a delusional idea that we should be focusing on China as an enemy — it's a country of over a billion people, it's a nuclear country — especially at a time when we need to work with China to deal with issues like the climate, like the pandemic, like global poverty.

China is going into Afghanistan and will work with the new Afghan government to build up the infrastructure. Well, where is all that infrastructure that the U.S. didn't do for the last 20 years? Why have they left Afghanistan, having been occupied by one of the richest countries in the world — us, the United States — to be one of the most impoverished countries in the world? The U.S. should actually learn from China that instead of going into countries with bombs and bullets, it should go into countries to figure out how to help build the infrastructure and build the economy, that would be a win-win situation.

AMY GOODMAN: What do you feel the U.S. owes to the people of Afghanistan?

MEDEA BENJAMIN: We feel that the U.S. owes a tremendous responsibility, not only for getting the Afghans out, as we're trying to do now, but for the millions of Afghans who are left behind in terrible, dire situations from this 20 years of war. You had a great program on yesterday, Amy, about the humanitarian crisis. Well, we feel like the U.S. is now going to use its economic warfare against Afghanistan to increase that humanitarian crisis by withholding $9 billion that belongs to Afghanistan in U.S. banks, by working with other countries in Europe and the IMF to withhold funding. We don't have to be friends with the Taliban, but we can't be the enemies, either, because the victims will be the Afghan people. We need to let go of their funds. We need to provide generous humanitarian support. In fact, the U.S. should fund the entire $350 million urgent request made by the UNHCR, the refugee agency, because that's equivalent to just one-and-a-half days of war in Afghanistan. So, we owe a lot to the people whose lives that we have helped destroy over these last 20 years.

AMY GOODMAN: As the battles rage in Congress over spending, I mean, you've got the massive infrastructure bill that the House just passed, the framework of $3.5 trillion, but there's also the Pentagon budget. Can you end there by talking about what you think needs to happen and the lessons of Afghanistan?

MEDEA BENJAMIN: This is exactly where we need to go as a people in the United States, to say that this epic failure in Afghanistan shows us that militarism is not the right way to respond to problems, that we have to cut the Pentagon budget in half, like Barbara Lee has suggested, freeing up $350 billion to be used to confront the real crisis of climate, of poverty, the infrastructure that we need, and to help countries around the world and our own country to deal with the pandemic and to get us a decent healthcare system. And I encourage all of the supporters of Democracy Now! to join us in this call to say to all our members of Congress and to the White House, "Cut the military budget in half." That is the most responsible way to respond to this tragedy of 20 years of colossal failure in Afghanistan.

AMY GOODMAN: Medea Benjamin, co-founder of CodePink, the author of a number of books, including Drone Warfare: Killing by Remote Control.

When we come back, we go to Haiti, where the death toll from the massive earthquake has passed 2,200, thousands of survivors growing increasingly desperate. Stay with us.

AMY GOODMAN: "Dans Mon Village" by Joséphine Baker, "In My Village." Joséphine Baker, the U.S.-born, French performer, who will be given a memorial in Paris's Panthéon mausoleum, making Baker the first woman to receive that honor. Her induction into the Panthéon will take place in November. She left the United States for France protesting racism.