How a national infrastructure program would protect Americans from hurricanes 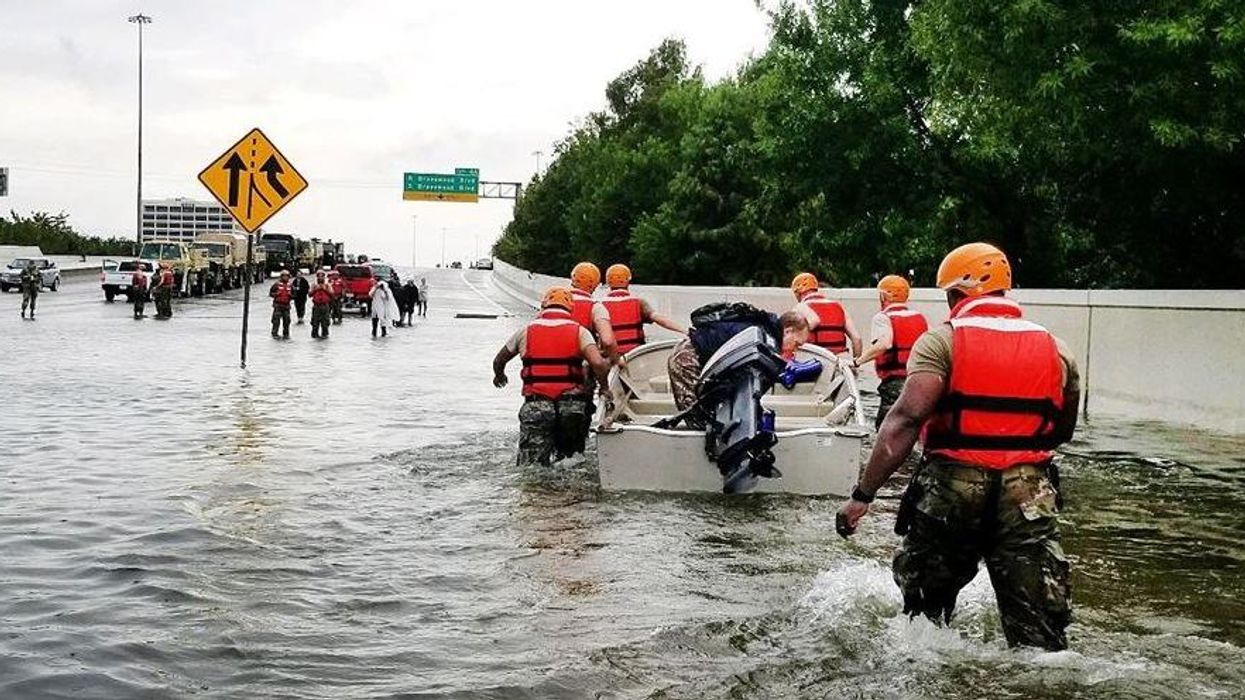 The volunteer firefighter still chokes up at the memory of navigating a personnel carrier through streets that Harvey turned into a debris-filled lake, pulling the stranded and sodden aboard while fielding calls the 911 center relayed to him from terror-stricken residents still waiting for help.

"It was call after call after call. They didn't know what to do," said Sullivan, a unit president with United Steelworkers (USW) Local 227 who works at the Albemarle specialty chemicals plant near Houston.

Four years after Harvey caused billions in damage and killed about 100, Sullivan knows exactly what the nation needs to do to avert future calamities like this: Commit to a national infrastructure program that strengthens coastal barriers and toughens America's roads, bridges, utilities and buildings against the more frequent and stronger storms associated with climate change.

President Joe Biden's American Jobs Plan, now before Congress, not only calls for much-needed investments in transportation systems, utilities, schools and other facilities, but also makes the increased resilience of infrastructure a central part of the building program.

"If the funds are allocated properly, this could go a long way," said Sullivan, a lieutenant in the Southeast Volunteer Fire Department, who fears what will happen if the nation fails to act now.

In addition to the death and destruction, hurricanes exact other tolls. They close schools and universities, pose environmental hazards and halt the operations of factories, triggering disruptions that ripple across the economy.

And the storms keep coming. Last year's season produced about 30 named storms, including Hurricanes Hanna and Laura, which struck parts of Texas.

More resilient infrastructure means measures like stronger home and school construction, relocation of utility lines underground to protect them from wind and water damage, increased use of microgrids to ensure power stays on in some areas even if it goes out in others, and building coastal barrier systems to deflect the storm surges that accompany hurricanes.

Sullivan also cited the need for an expanded highway network to speed up the evacuation of residents during weather emergencies and better drainage systems, especially in unincorporated areas like his 5-square-mile community just outside of Houston.

Increased residential development since Harvey has only increased the risk of damage and death from future hurricanes. Yet his community has little in the way of infrastructure or government services.

"We don't even have city building inspectors," said Sullivan, whose department rescued about 2,500 residents after Harvey, many in personnel carriers it previously acquired from the National Guard.

The hundreds of chemical plants, several oil refineries and thousands of storage tanks concentrated along the Gulf Coast compound the threats that hurricanes pose to residents, local communities and the national economy. These facilities produce much of the nation's jet fuel and gasoline, plus chemicals for numerous other products the country uses every day.

Many of these sites have "zero protection" against storm surge, even though flooding could lead to explosions, fires or chemical releases that claim more lives and divert first responders from other hurricane-related duties. These grim scenarios haunt firefighters like Sullivan throughout the storm season.

While Sullivan points out that chemical companies need to take greater responsibility for their own facilities—by upgrading water-pumping equipment, for example—he sees a national infrastructure program as a historic opportunity to make the comprehensive improvements needed to avert future weather disasters.

That means not only construction of storm barriers to protect plants and storage tanks but also upgrades to transmission pipelines that could suffer damage, with catastrophic consequences, during extreme weather.

Stronger infrastructure also would spare millions of families the heartache of loss and the misery of rebuilding. In 2017, for example, Hurricane Maria killed about 3,000 people in Puerto Rico, knocked out power to the whole island and reduced entire communities to rubble.

Abandoned by the previous presidential administration, residents relied on donations of water, clothing and other items just to survive, recalled Mayra Rivera, president of USW Local 8198, which represents municipal workers in Ponce.

Four years later, Rivera remains grateful for the help of her union brothers and sisters. But the island continues its slow recovery, with many residents still struggling to clean up and rebuild homes that have blue tarps covering holes in their roofs.

"When you fly to Puerto Rico, from the air, you see a lot of blue tarps," explained Rivera, who took special training on flood cleanup from the USW's Tony Mazzocchi Center for Health, Safety, and Environmental Education and now teaches others how to guard against mold and other flood hazards.

Hurricanes aren't the only threat. Over the past two years, an unusually large number of earthquakes leveled more homes and businesses while also destroying or damaging many of the poorly constructed schools in her part of the island.

"We need a lot of funds to recover and improve our infrastructure in Puerto Rico," observed Rivera, citing the need not just for stronger roads and bridges but for a resilient power grid, sturdily built schools and assistance to weary homeowners. Only the federal government has the resources to accomplish this work, she added, noting severe financial problems limit the projects the island can fund itself.

The sweeping infrastructure upgrades in the American Jobs Plan will modernize the nation and supercharge the economy while averting needless deaths and untold anguish.

"I don't subscribe to the idea that infrastructure is just bridges and roads," said Sullivan, who favors Biden's go-big approach. "This is our chance, right? We need to take it."