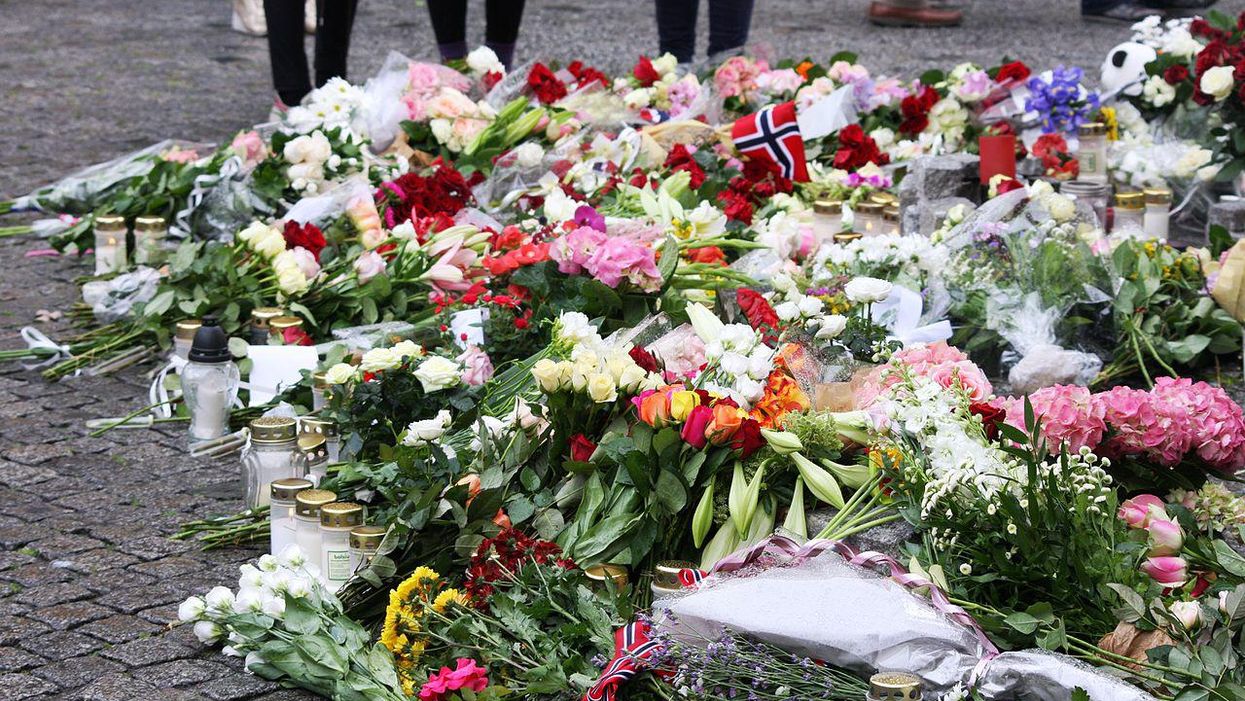 A memorial for victims of the Norway terrorist massacre in Oslo on July 23, 2011, Wikimedia Commons
Alex Henderson
July 22, 2021

It was ten years ago, on July 22, 2011, that a White supremacist carried out a terrorist attack in Norway and murdered 77 people. Journalist Cynthia Miller-Idriss looks back on that incident in an op-ed published by NBC News' website, emphasizing that those who treated that attack like an isolated incident made a huge mistake.

In her op-ed, published on the tenth anniversary of the Norway massacre, Miller-Idriss explains, "The facts of the attacks on July 22, 2011, are unambiguous and horrifying. After detonating a vehicle bomb that killed eight people at a government building in Central Oslo, a 32-year-old Norwegian man traveled to nearby Utøya Island, where an annual youth summer camp held by the leading political party was underway. For well over an hour, he systematically gunned down dozens of children and young adults across the island, killing 69 people and wounding scores more before he was apprehended."

The terrorist's "rationale" for the massacre, Miller-Idriss notes, was "rooted in extreme anti-Islam and anti-immigrant beliefs and what he saw as 'the deliberate and orchestrated Islamization of Europe by Muslim immigrants.'"

"Although the attack was focused on Norway," Miller-Idriss points out, "it was strongly influenced by the American and global Islamophobia industry, as his scores of citations of anti-Islam activists illustrate."

Vicious terrorism by White supremacists and White nationalists is nothing new. The Ku Klux Klan has been carrying out terrorist attacks since Reconstruction following the U.S. Civil War of the 1860s. But after al-Qaeda's horrific attack on the World Trade Center and the Pentagon on September 11, 2001, many pundits in the United States' right-wing media — from Fox News to AM talk radio to wingnut websites — have been acting as though radical Islamists have the market cornered on terrorism. They don't; the Norway attack of July 22, 2011 — like the Oklahoma City massacre of 1995 and so many attacks before that — serves as a reminder that White supremacists and White nationalists can be as deadly as far-right Islamist groups like al-Qaeda, ISIS (Islamic State, Iraq and Syria) and Boko Haram.

"It would take eight years following the attacks in Norway for American and global terrorism experts and policymakers to start to take the threat of White supremacist extremism more seriously," Miller-Idriss writes. "That delay allowed White supremacist extremism to fester. The Oslo attacks directly inspired terrorist and mass shooter attacks and plots in at least six countries, including the 2019 livestreamed murders of 51 Muslim worshippers in New Zealand."

There are is a definite parallel between radical Islamist ideology and White supremacist ideology. Radical Islamists believe that terrorist attacks are justified because their civilization and culture are under attack from the West; White supremacists and White nationalists, similarly, believe that White Christian culture is facing an existential threat.

Miller-Idriss doesn't get into the radical Islamist/White supremacist parallels in her op-ed, but she does note that the July 22, 2011 assault was inspired by "the idea of an existential threat to western Christian civilization." The journalist notes how influential that attack was — and continues to be.

Miller-Idriss observes, "The world had experienced White supremacist terrorism long before the attacks in Norway, of course. But there was a notable shift after Oslo — both in directly inspired attacks and in those motivated by rising White supremacist extremism more broadly…. Attacks at a Wisconsin Sikh temple, a Black South Carolina church and a Pittsburgh synagogue were just a few of hundreds of global far-right terrorist attacks over the past decade."