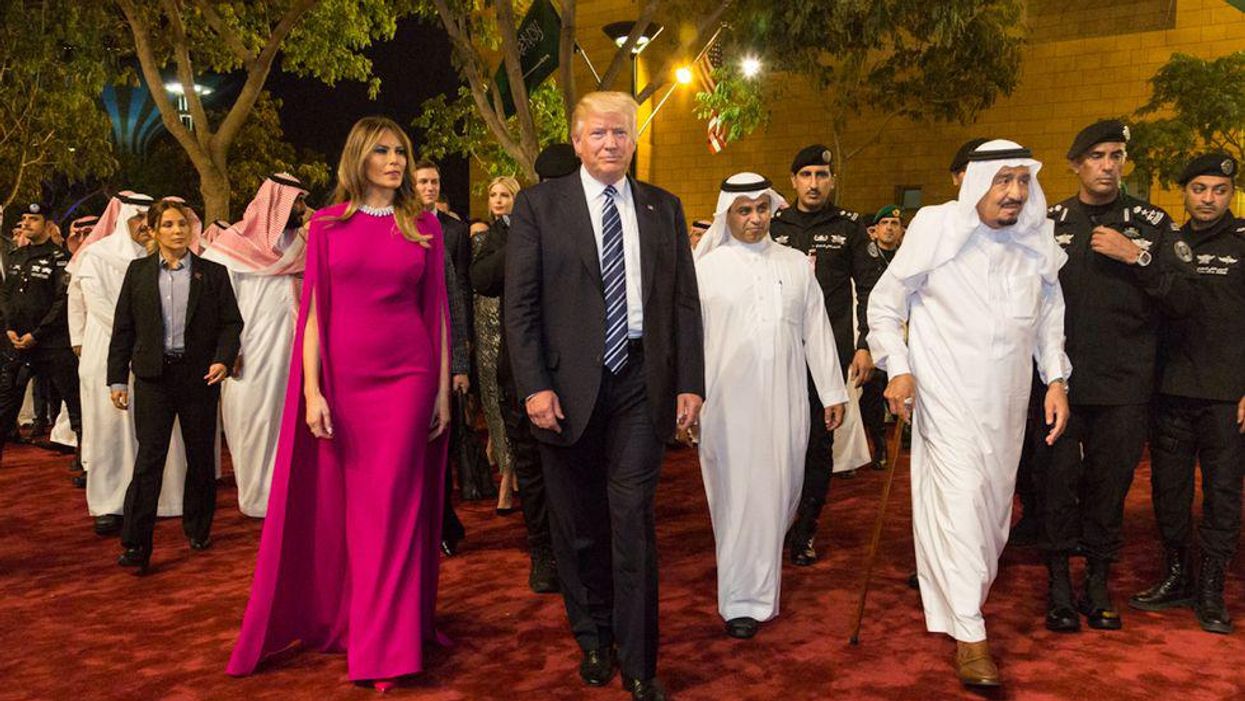 President Donald Trump and First Lady Melania Trump arrive to the Murabba Palace, escorted by King Salman bin Abdulaziz Al Saud of Saudi Arabia, Saturday evening, May 20, 2017, in Riyadh, Saudi Arabia, to attend a banquet in their honor. (Official White House Photo by Shealah Craighead)
Trump has a plan to steal the election — in fact, he has at least 5 of them
Sarah Okeson
and
DC Report
July 12, 2021

Holdover Trump election officials are trying to run out the clock on campaign finance cases, including a serious accusation that gun lovers secretly gave Republican leaders millions of dollars.

Charges against the National Rifle Association were leveled by the gun-control group founded by former U.S. Rep. Gabby Giffords, a gunshot victim from Arizona.

The Federal Election Commission generally has five years to act on campaign finance violations. The FEC spent much of the presidential election year of 2020 not even able to meet because it didn't have enough commissioners and has an enormous backlog of cases.

"The court should not allow the FEC to capitalize on its years-long failure to act on these complaints by simply waiting out the clock," wrote the attorneys for Giffords, a nonprofit that sued the FEC in 2019 in federal court.

Trump appointee Allen Dickerson, Cooksey and Trainor cited the statute of limitations to dismiss a case about allegations filed in 2018 that the son of former Nevada Sen. Dean Heller, a Republican, was paid to do social media consulting for his father's 2016 campaign.

"We believe the Commission is better served prioritizing other investigations," they wrote.

FEC head Shana Broussard and a commissioner, Ellen Weintraub, both Democrats, also voted to dismiss the case against Heller.

Giffords, founded by former Congresswoman Gabby Giffords, who was shot and seriously injured in a 2011 assassination attempt, sued the FEC. She said the commission failed to act on allegations that the NRA coordinated millions of dollars in illegal campaign contributions to Trump and other candidates.

Giffords wants a federal judge to order the commission to act on complaints filed with the FEC. The lawsuit says the NRA used a network of shell corporations to illegally coordinate spending millions with the campaigns of Trump and at least six other federal candidates, including Sen. Josh Hawley (R-Mo.) and Sen. Tom Cotton (R-Ark.)

"The allegations … constitute a substantial and ongoing threat to the integrity of the election system," wrote the attorneys for Giffords.

Giffords said the scheme funneled millions of dollars in illegal, unreported and excessive in-kind contributions. Giffords accused the National Rifle Institute for Legislative Action and the NRA Political Victory Fund of spending more than $25 million during the 2016 election cycle supporting Trump and distributing and placing those ads with the same employees who were placing Trump's own ads.

Other candidates who benefited from NRA scheme in 2014 were:

Hawley beat Democratic incumbent Claire McCaskill in 2018 in Missouri with assistance from the NRA.

Matt Rosendale challenged Democratic incumbent Jon Tester for the U.S. Senate in Montana in 2018 with NRA help but lost.

FEC attorneys argued in 2020 that there had been no unreasonable delay in addressing the complaints and said that the commission was incapable of acting at that time because it didn't have enough commissioners.

In fiscal 2019, the commission started 31 investigations, at least twice as many as were opened in each of the previous six fiscal years.

The Supreme Court has permitted unlimited independent political spending by groups like the NRA on the theory that independent spending does not pose the same risk of corruption as direct contributions. Expenditures coordinated with a candidate are not considered independent.

The NRA accused Cox of fleecing more than $1 million from the organization from 2015 to 2019. He is cooperating with the investigation of the NRA by New York Attorney General Letitia James.