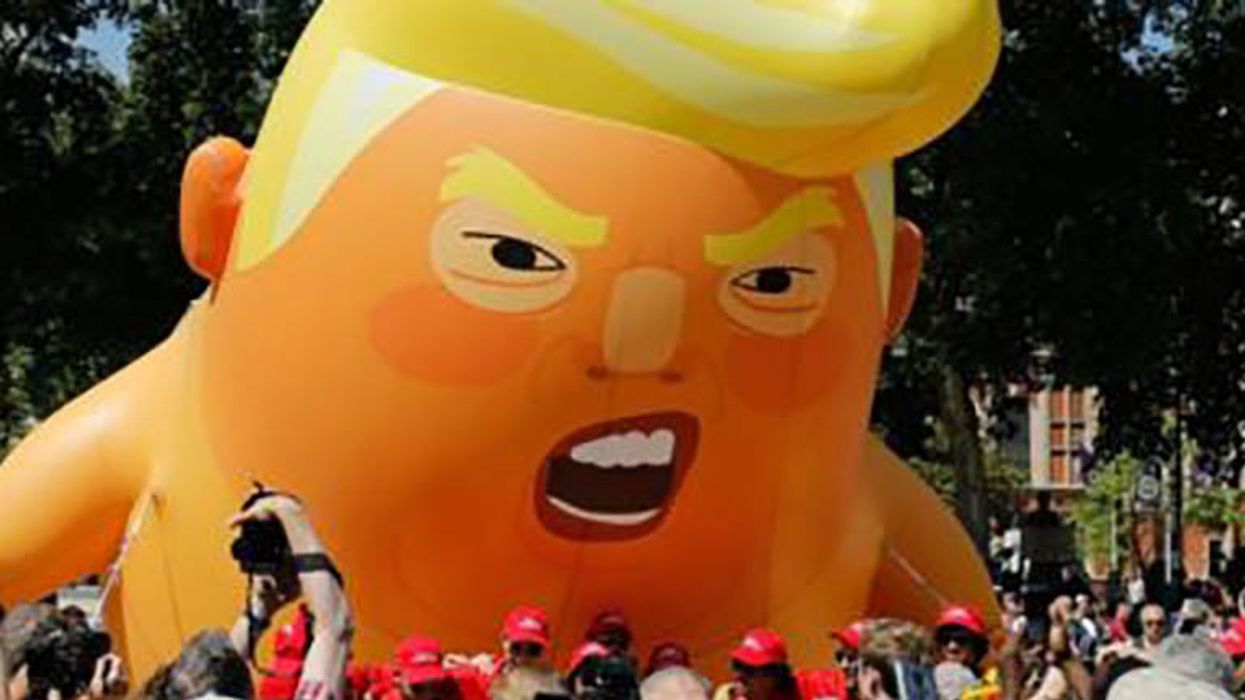 A 'Salute to Donald Trump'
Aldous Pennyfarthing
and
DailyKos
July 18, 2021

The "just wait, he's gonna turn presidential any moment now" crowd is still at it, months after Donald John Trump skulked away from the White House with his schwanz between his atrophied, KFC-bucket-balancin' gams.

For more than five years after his rambling, racist campaign launch speech, Trump has had every opportunity to prove there was more to him than meets the eye. There isn't. I've looked. They say the eyes are the windows to the soul. Trump's are more like splotchy peepholes into John Wayne Gacy's crawlspace. There's nothing there but rank evil, soul-crushing emptiness, and half-slurped McNugget sauces.

Sure, it's possible Trump could still see the light, renounce his numerous past outrages, and embrace Western liberal democracy. It's also possible I'll suddenly improve upon my 4-inch vertical and join the Milwaukee Bucks roster just in time to snag an NBA championship ring. (Go Bucks! As a native Wisconsinite, I need something to distract me from Ron Johnson's perpetual awfulness.)

That said, Trump's legion of apologists is keeping the faith. The guy was president for four years, after all. He must have learned something along the way about fair and effective governance. (Narrator: He didn't.)

Witness one Conrad Black, the author of A President Like No Other: Donald J. Trump and the Restoring of America. Black apparently thinks there's still something salvageable in this tire fire of a human being, and he's decided to die on this Hill.

Buckle up, folks. This will get weird, starting with the headline. Unless you want to spray your beverage halfway to Alpha Centauri, make sure you're not drinking anything when you read this. You've been warned.

"How Trump can win again: Become the calm, moderate candidate," Black posits. It just gets goofier from there.

The political scene is evolving so quickly that I presume to offer some advice to President Trump: He can now win in 2024 by being the potential candidate of calm and moderation.

Sure, Trump can do that. Or he can suggest nuking hurricanes, try to overturn a free and fair election, incite a deadly riot, lobby for putting alligator-filled moats at the southern border, promote unapproved drugs, act like a freshly gelded howler monkey when asked anodyne questions by the media, and generally behave like a marginally less grounded Randy Quaid.

The uncharacteristically incautious comments of Senate Minority Leader Mitch McConnell (R-Ky.) that, in effect, the dreadful Trump specter had passed and they could all go back to being the good-natured losers of the Bush-McCain-Romney eras was effectively retracted within a few days. Rep. Liz Cheney (R-Wyo.) has disgraced herself by joining the Trump-hate operation of House Speaker Nancy Pelosi (D-Calif.) and, in Republican terms, is sinking without a ripple as a consequence.

Hmm, the Bushes won three out of four of the elections they competed in after becoming their party's nominees. John McCain and Mitt Romney lost just as many elections as Trump. And George H.W. Bush and George W. Bush both won the popular vote at least once, whereas Trump never did. What on Gaia's green globule is this fucknut talking about?

Black rambles on for a half dozen anti-Democrat paragraphs before arriving at the pièce de résistance.

Now, as time passes, the public irritation with Trump's bombastic behavior, of his being in the nation's face day and night for four years, will recede and gradually be replaced by the spectacle of a comatose Biden administration, floundering and dissembling, fecklessly struggling with the various crises it has created. There will be, soon enough, nostalgia for Trump instead — and if he is wise, he can become a winning figure of comparative Olympian serenity.

Nostalgia for Trump? Uh, no. The guy is seared into our memories, I'll give you that. But "nostalgia" implies fond memories. I have nostalgia for eating Cracker Jack on a picnic bench during the summer of '76. I don't have nostalgia for the raucous pink belly I received from my reprobate siblings 10 minutes later.

But this. This! "… if he is wise, he can become a winning figure of comparative Olympian serenity."

Trump isn't wise, and never will be. (See also: nearly every news story from the past half-decade.)

It's normal for historians and especially partisans to want to rehabilitate a former president's image and reputation, but Trump's rep is trashed. He might as well have smeared those feces on the inner walls of the U.S. Capitol himself. There's no forgetting Jan. 6—or any of the other 1,460 days he cosplayed as president.

And no amount of gaslighting after the fact can possibly make us forget, no matter how much devotees like Conrad Black try.