'Summer of Soul' is a musical celebration of Black joy 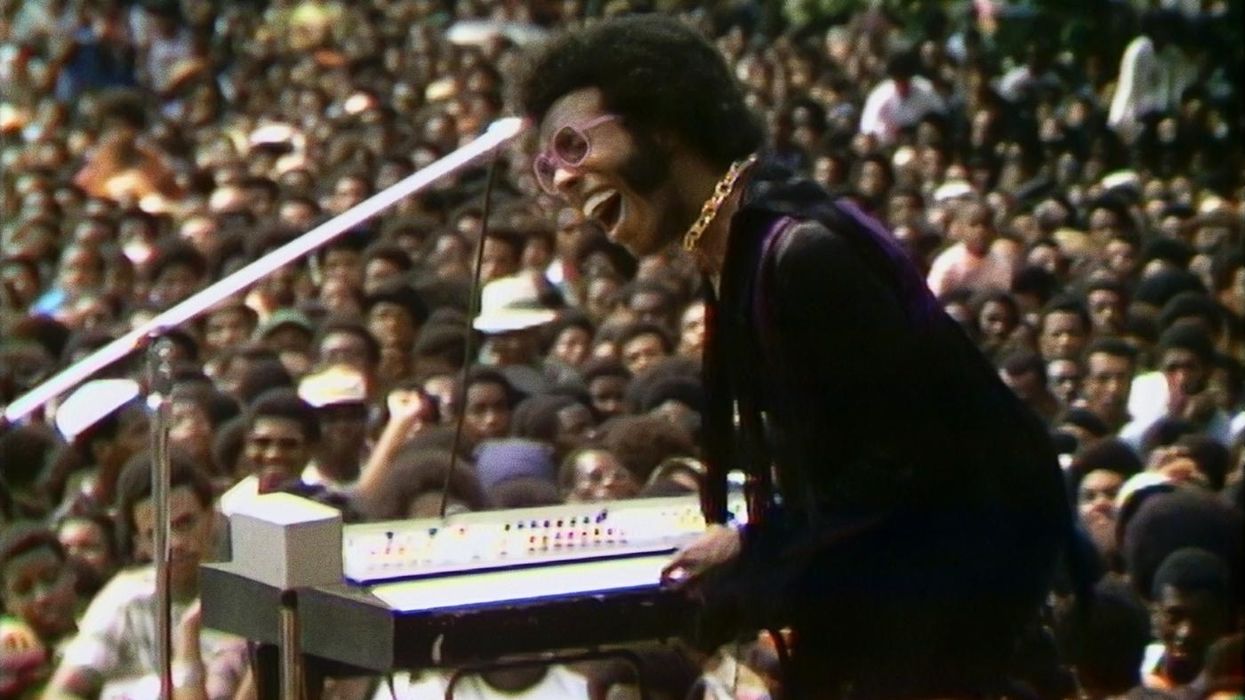 The avidly awaited documentary Summer of Soul (...or, When the Revolution Could Not Be Televised) from Ahmir "Questlove" Thompson—which premiered and won major awards at the Sundance Film Festival—is now in theaters and streaming on Hulu.

There is literally too much music in the film to cover here in one #BlackMusicSunday story. However, it is important to note that the film, covering the Harlem Cultural Festival of 1969, represents a sweeping range of Black music genres, including gospel, R&B, jazz, salsa, blues, and African drumming, as well as pop and rock. More importantly, it is not simply a series of performances; The film is about music that is inextricably linked to the lived political, cultural, and historical experience of Black people, not only from Harlem, but in the Black diaspora.

I'm one of the people chosen to offer commentary in the film; I thank Questlove and his producers for pursuing this journey through to its fruition. Though 52 years have passed, this story is needed more than ever: In a time where the Black community is under siege, our voting rights are being attacked once again, and we face life and death issues at the hands of police and vigilantes, along with the depredations of unequal health care in the time of COVID-19, we need joy.

We need our music, which has carried us through darker times than we face now, and will continue to do so, no matter what we face.

If you've missed all the media excitement about the film and the thousands of enthusiastic posts on social media, here's the trailer.

This is how Searchlight Pictures describes Summer of Soul:

In his acclaimed debut as a filmmaker, Ahmir "Questlove" Thompson presents a powerful and transporting documentary—part music film, part historical record created around an epic event that celebrated Black history, culture and fashion. Over the course of six weeks in the summer of 1969, just one hundred miles south of Woodstock, The Harlem Cultural Festival was filmed in Mount Morris Park (now Marcus Garvey Park). The footage was never seen and largely forgotten–until now. SUMMER OF SOUL shines a light on the importance of history to our spiritual well-being and stands as a testament to the healing power of music during times of unrest, both past and present. The feature includes never-before-seen concert performances by Stevie Wonder, Nina Simone, Sly & the Family Stone, Gladys Knight & the Pips, Mahalia Jackson, B.B. King, The 5th Dimension and more.

The Harlem Cultural Festival. Have you ever heard of it?
Better question: If I told you that approximately 300,000 Black people peacefully gathered at a park in Harlem (over six weekends in 1969) and watched performances from Nina Simone, Sly and the Family Stone and Stevie Wonder, before Woodstock, would you believe me?
Prior to the news of Summer of Soul (...Or When The Revolution Could Not Be Televised), a documentary directed by Ahmir "Questlove" Thompson, I'd argue that many would say "No." Heck, I'd likely say no. But then I'd shake off that moment of naïveté and remind myself that within this racist American system, Black erasure is a pervasive. It's no secret that the contributions of Black people (across the globe) are erased from history books, an act which ultimately upholds white power and privilege.

The Root also devoted an episode of Unpack That to the documentary, helping give important societal context.

Summer of Soul opens with an interview with Musa Jackson, who attended the festival. Next, we hear a voiceover from Cyril "Bullwhip" Innis, Jr., who was a beloved comrade of mine, a community organizer, and a member of the Black Panther Party in Harlem, as we see footage of a sea of Black faces. The opening music selected for the film is from a young Stevie Wonder.

I'm not going to play performances from the film today, since I hope that everyone will see it! I do, however, want to play songs from the wide range of musicians who appear, starting with Stevie Wonder.

Those of us who are old enough still remember when he was "Little" Stevie Wonder.

...it's not widely remembered that "Fingertips" was a live version of an instrumental album track on which he only played percussion. Written by Hank Cosby and Clarence Paul, it was recorded for his debut album The Jazz Soul of Little Stevie, released in September 1962. The studio "Fingertips" led off the disc, but although Stevie played bongos, the featured instrument was not harmonica at all. It was the flute playing of Funk Brothers member "Beans" Bowles.
By the time the Motown Revue hit the road, "Fingertips" had turned into a showcase for the frenetic harmonica playing of the 12-year-old genius, and an exciting finale to his live set. In March 1963, Berry Gordy arranged for a recording truck to capture the date in Chicago. Then, at the end of his set, with Mary Wells waiting to hit the stage as the next featured artist, Stevie was addressing the crowd.
'I want you to clap your hands'
"The name of the song is called, uh, 'Fingertips,'" he told them. "Now I want you to clap your hands. Come on, come on. Yeah, stomp your feet, jump up and down, and do anything that you wanna do." The track kicked in with a drum figure played by a young Motown house musician by the name of Marvin Gaye.

Little Stevie was beloved in Harlem, and appeared at the Apollo in 1963.

Next up, Summer of Soul brings us The Chambers Brothers, who hailed from Mississippi.

Unlike some acts billing themselves as such, The Chambers Brothers really were brothers. Growing up in a sharecropping family in one of the most impoverished parts of Mississippi, the four siblings, George, Joe, Lester and Willie, first started to sing at the Mount Calvary Baptist Church in Lee County. After his discharge from the U.S. Army in 1952, the oldest brother, George, moved to South Los Angeles and was soon joined by the other three. Here, the foursome began performing throughout Southern California, with George on bass guitar, Willie and Joe on guitar and Lester on harmonica. They toiled in obscurity for years before switching to a more Gospel/Folk sound in 1961.
In 1965 they added a drummer to the group, a White man named Brian Keenan, and moved more toward a Rock/Soul act. The group attracted national attention when they appeared at the 1965 Newport Folk Festival and were soon booked into the psychedelic venues of Electric Circus and both Filmore East and West, as well as The Apollo Theatre. They recorded their own version of The Isley Brothers' hit, "Shout" for the Vault label, but it went largely unnoticed.
The band was signed by Columbia Records in 1966 and an early version of "Time Has Come Today" was hastily recorded late that year. Unfortunately, it was rejected by the label. Instead, a more orthodox single called "All Strung Out Over You" b/w "Falling In Love" was released on December 19th, and became a regional hit. The success of that initial single gave the band the opportunity to re-record "The Time Has Come Today" in 1967.This time it became title song of their first album, "Time Has Come", and reached #11 on Billboard's Hot 100 in the Fall of 1968. The L.P. featured an 11-minute, psychedelic version of the song.

In the film they sing "Uptown," which most Black New Yorkers would appreciate, given the difficulties of getting a cab to go there.

I'm going uptown to Harlem
Gonna let my hair down in Harlem
If a taxi won't take me, I'll catch a train
I'll go underground, I'll get there just the same

That song was actually written for them by a young Betty Mabry, hostess at the Cellar Club, who would later briefly be married to Miles Davis, and become known as Betty Davis.

This footage of The Chambers Brothers performing "Time Has Come Today" was recorded in Germany in 1969—the same year they appeared in Harlem.

Gospel is up front and present in the film, represented by artists I've featured here in the past, like Mahalia Jackson and the Staples Singers. We get to see the enthusiastic Harlem reception of the Edwin Hawkins Singers, and learn that, as popular as the Edwin Hawkins Singers became with their hit "Oh Happy Day," they were heavily criticized by their own Pentecostal elders for their worldly fame.

The Edwin Hawkins Singers did a half-hour television special in 1971.

I was especially pleased to see jazz artists Max Roach and Abby Lincoln featured at the festival and in the film footage—not just because of their superb artistry, but because of their commitment to social change and the struggle for Black rights, here and in Africa. As Marc Anthony Neal wrote of the We Insist—Freedom Now! Suite in 2019, it was "An Early Soundtrack to Black Lives Matter."

If the opening tracks "Driva-Man" and "Freedom Day" captured the spirit of Roach and Brown's original vision, the closing tracks "All Africa" and "Tears for Johannesburg", written after the Sharpsville Massacre of 1960 brought international attention to South African Apartheid, capture the increasing Global vision of African American artists and activists.
The literal centerpiece of the Freedom Now! Suite was the song "Triptych: Prayer/Protest/Peace" in which Lincoln's vocals and now iconic screeching was prominently featured. The song, originally intended as a ballet, sonically reproduced both the trauma and possibilities of Black life in an era overridingly defined by protest and threats of violence. As Roach would reflect decades later in the Boston Globe, on the occasion of the beating of motorist Rodney King, "I have pictures of black men hanging from trees, tarred and feathered, barbecued…This kind of thing, I'm afraid, is part of the fabric of this country, and I'm not sure when it's going to stop."

It's 37 minutes worth listening to.

I hope this little taste of music today whets your appetite to see the entire film. Trust that I've barely scratched the surface of the list of performers: Gladys Knight and the Pips, the Fifth Dimension, Sly and the Family Stone, Ray Barretto, Hugh Masekela, David Ruffin, Nina Simone, and more are featured in this stunning piece of history that somehow lay buried for 50 years.

Most importantly of all, for me, this film shows the soul of Harlem to the world—a Harlem that is filled with concertgoers who don't resemble the "scary" Black people too often demonized by those outside of the Black community.