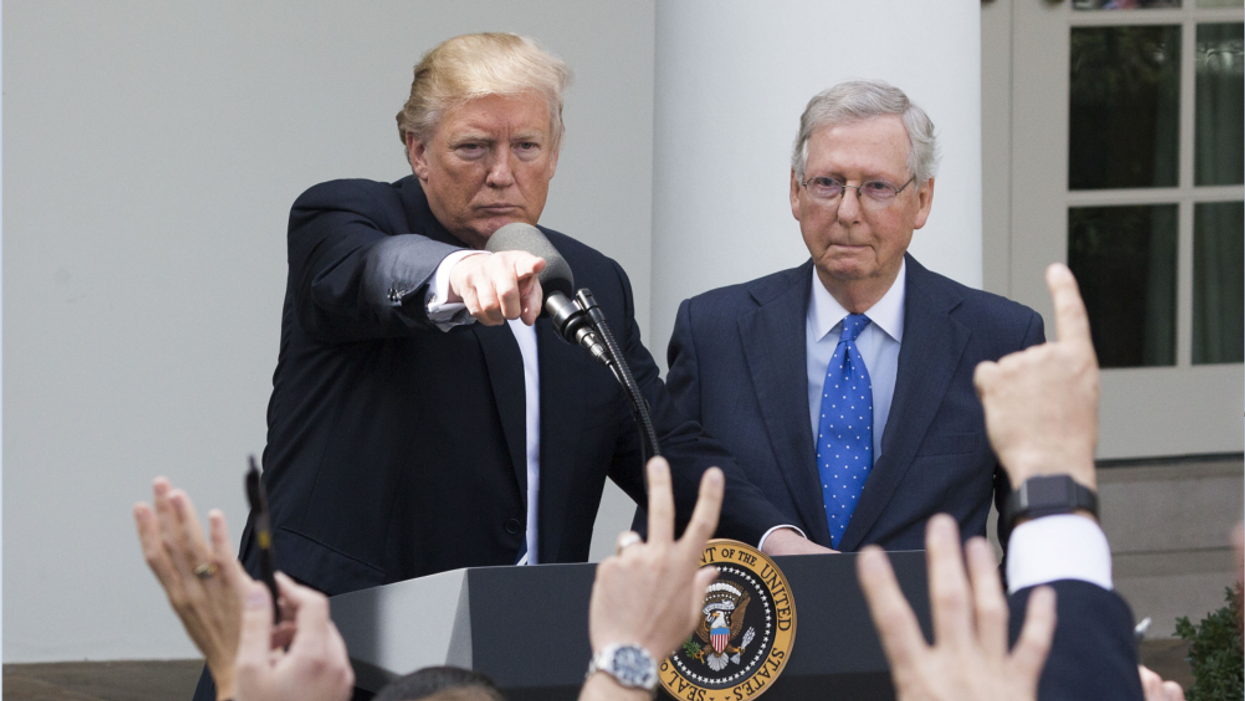 No matter how much a Republican has done for Donald Trump, the former president can easily turn against them if he feels they have let him down in some way — and that includes former Vice President Mike Pence, former U.S. Attorney General William Barr and Senate Minority Leader Mitch McConnell. They all were his targets for an interview featured in Carol Leonnig and Philip Rucker's new book, "I Alone Can Fix It: Donald J. Trump's Catastrophic Final Year."

On March 31, Washington Post reporters Leonnig and Rucker interviewed Trump in person for their book at his Mar-a-Lago resort in South Florida. "I Alone Can Fix It" is being released half a year into Joe Biden's presidency; it was six months ago, on January 20, that Trump vacated the White House and Biden was sworn into office. Highlights of that interview can be found in a book excerpt published by Vanity Fair.

During the interview, Trump promoted the false and debunked conspiracy theory that he won the 2020 election — which, in fact, he lost by more than 7 million votes. And Trump believes that Pence let him down by not preventing Congress from affirming Biden's Electoral College victory on January 6, the day a violent mob of Trump's supporters attacked the U.S. Capitol Building.

The ex-president told Leonnig and Rucker, "The greatest fraud ever perpetrated in this country was this last election. It was rigged, and it was stolen. It was both. It was a combination, and Bill Barr didn't do anything about it."

In December 2020, Trump was furious when Barr told the Associated Press that there was no evidence proving the type of widespread voter fraud that Trump was alleging. As much of a Trump loyalist as Barr had been, he acknowledged that Biden was the United States' legitimate president-elect.

Trump told Leonnig and Rucker, "Barr disliked me at the end, in my opinion, and that's why he made the statement about the election, because he did not know. And I like Bill Barr, just so you know. I think he started off as a great patriot, but I don't believe he finished that way."

Similarly, Trump believes that Pence let him down as well. Pence, in early January, stressed that as vice president, he didn't have the authority to reverse the Electoral College results. But as Trump saw it, he wasn't trying hard enough.

At Mar-a-Lago, Trump told Leonnig and Rucker, "Had Mike Pence had the courage to send it back to the legislatures, you would have had a different outcome, in my opinion. I think that the vice president of the United States must protect the Constitution of the United States. I don't believe he's just supposed to be a statue who gets these votes from the states and immediately hands them over. If you see fraud, then I believe you have an obligation to do one of a number of things."

On Capitol Hill, Democrats view Sen. Mitch McConnell as a fierce and unyielding partisan who fights them every step of the way. But Trump doesn't agree.

Thanks in part to McConnell, all three of Trump's Supreme Court nominees are now on the High Court: Justice Brett Kavanaugh, Justice Neil Gorsuch and Justice Amy Coney Barrett. Yet Trump believes that McConnell didn't do enough for him. And ironically, Trump holds a grudge against the Senate minority leader for not wanting to abolish the filibuster. Democrats, during the Biden era, have been complaining that the filibuster is preventing them from getting important legislation passed in the Senate — from a voting rights bill to a commission to study the January 6 insurrection.

Trump said of McConnell, "He's a stupid person. I don't think he's smart enough. I tried to convince Mitch McConnell to get rid of the filibuster, to terminate it, so that we would get everything — and he was a knucklehead, and he didn't do it."

The former president told Leonnig and Rucker, "Chris has been very disloyal, but that's OK. I helped Chris Christie a lot. He knows that more than anybody, but I helped him a lot. But he's been disloyal."