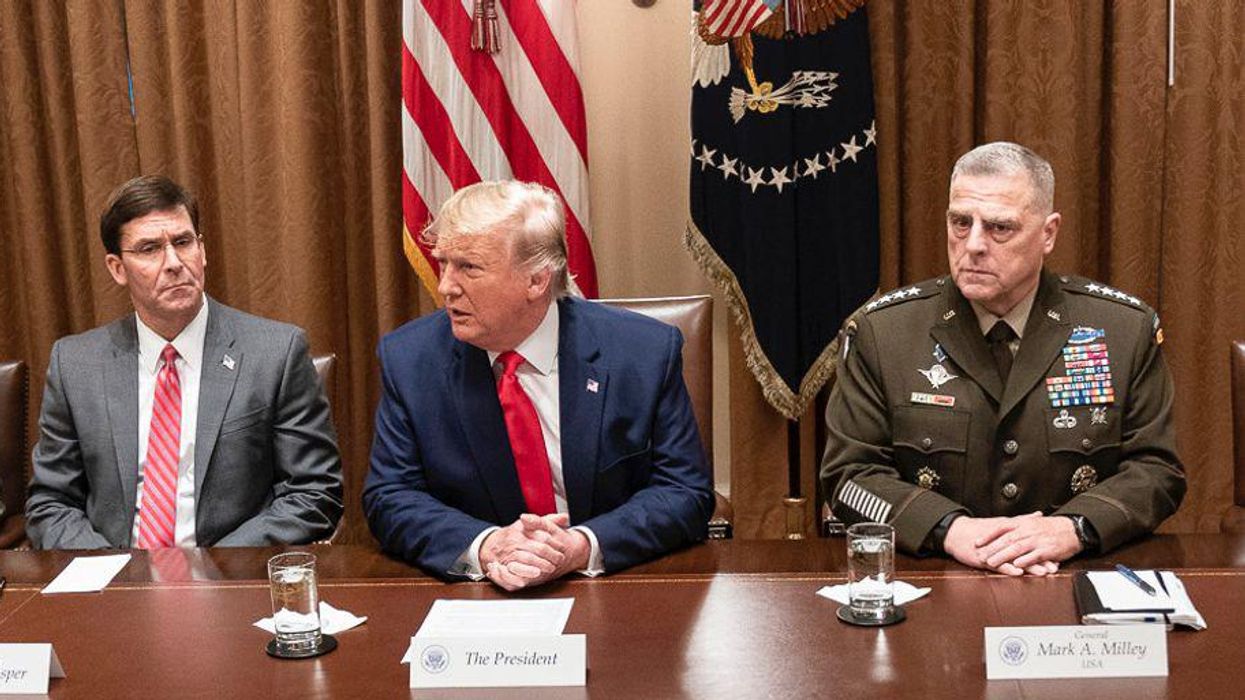 The Chairman of the Joint Chiefs of Staff under Donald Trump, General Mark Milley, was so concerned the outgoing president would try to stage a military coup he warned the heads of the U.S. Military branches, did daily "check-in" calls with the White House Chief of Staff, and likened the Commander in Chief's efforts to retain power to Adolf Hitler.

Bombshell reporting from The Washington Post's Carol Leonnig and Philip Rucker in their new book, “I Alone Can Fix It: Donald J. Trump's Catastrophic Final Year." reveals the extent to which Trump was desperate to stay in office.

"Milley was so shaken by Trump's behavior, that what he did was he got together with the other Chiefs, the Navy, the Air Force, the Marines. They planned – they really believed there could be a coup attempt by Trump," CNN's Jamie Gangel told Anderson Cooper Wednesday night, citing The Post's reporting.

"Leonnig and Rucker write Milley viewed Trump as, 'the classic authoritarian leader with nothing to lose.' And then, Milley is quoted as saying, 'this is a Reichstag moment,'" Gangel adds.

CNN's @jamiegangel discusses troubling new revelations about former Pres. Trump's final days in office.
"To hear general Milley say this … is stunning," she says of Chairman of the Joint Chiefs Gen. Milley's reported pledge at the time to thwart any at any illegal coup attempt. pic.twitter.com/tid0VFyKWS — Anderson Cooper 360° (@AC360) July 15, 2021

Former McCain presidential campaign strategist, now Lincoln project co-founder Steve Schmidt says Leonning and Rucker "are among the very best journalists in the country. No one should doubt the veracity of their shocking reporting."

"Was Milley suggesting that he had plans in place to subvert a launch order from Trump?" Schmidt asks.

"It is urgent that the American people find out the truth around this matter. In fact, it is beyond urgent. It is a national emergency," Schmidt warns. "The man we are talking about, Trump, isn't just the front runner for the '24 nomination he is already the presumptive nominee."

Georgetown professor, Brookings senior fellow, MIT research affiliate Caitlin Talmadge says, "We should be relieved Milley took the steps he did and also profoundly alarmed that they were necessary. It's a symptom of other major institutional failures and a terrible omen for the future."

She points to this from Former Pentagon and White House staffer Jim Golby, who is responding to a tweet from HuffPost White House correspondent S.V. Dáte:

As hideous & dangerous as the events of January 6th were, the inability of Trump to co-opt the military was key.
But it also should concern us all that we had/have to rely solely on military professionalism as a final safeguard. We urgently need to rebuild the others. https://t.co/VrL8CtsgM7 — Jim Golby (@jimgolby) July 14, 2021