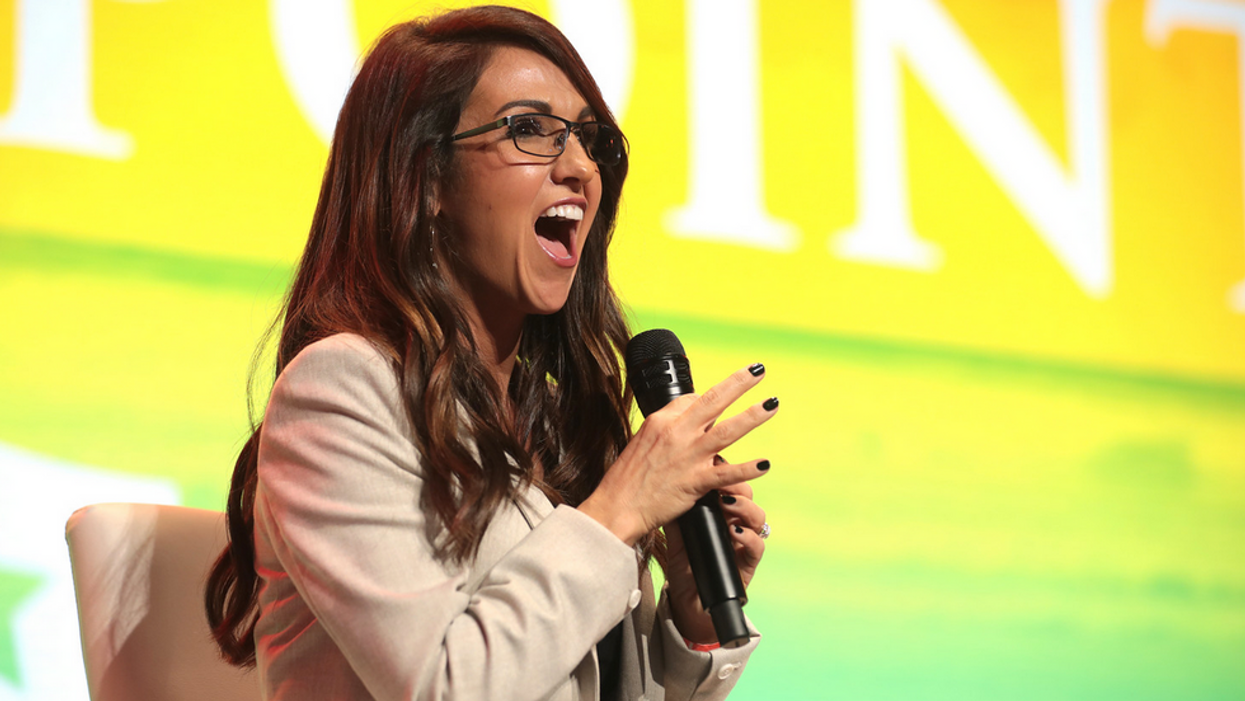 U.S. Congresswoman-elect Lauren Boebert speaking with attendees at the 2020 Student Action Summit hosted by Turning Point USA at the Palm Beach County Convention Center in West Palm Beach, Florida, image via Gage Skidmore.
GOP's Lauren Boebert accused a fellow lawmaker of trying to 'incite a riot' — and it blew up in her face
Mark Sumner
and
Daily Kos
July 11, 2021

Boebert isn't the first Republican to be caught sockpuppeting to make her opinions seem more popular, to take secret jabs at enemies, or do whatever Boebert is doing when retweeting these posts. Not by a long shot. But there is something particularly interesting about finding out that this Republican has sockpuppet tendencies.

So, Lauren Boebert set up what's clearly a throwaway sockpuppet account to boost her own posts, retweet some decidedly odd comments about men, and to follow Rep. Alexandria Ocasio-Cortez (oh yes, Freedom Fighter follows AOC). But mostly what Boebert's sockpuppet points out is that there's a mystery out there that needs to be solved — and it's all about a date.

Boebert's sockpuppetry was discovered by comedy writer Toby Morton in a way that's almost as hilarious as Morton's work on South Park. In a solid Karen moment, Boebert came to chase Morton away when he was filming a bit at a location that Boebert felt was too close to her Colorado bar. During this encounter Boebert uses her phone to video Morton. But where did that video actually pop out at a time when Boebert wanted to shore up her position in an argument with Morton? From @freedom53597835.

At the moment, Boebert is still feeding posts into the burner account in a hilario-pathetic effort to prove that it's so, so not her burner account. But, as Meidas Touch points out, the discovery of this account from Boebert only fires the starting gun for the real search—her other accounts. In particular, the Freedom Fighter account was created in February, meaning that it was created after the events of Jan. 6 and after Boebert was aware that she had been accused of leading insurgents on tours of the Capitol that were designed to show them how to subvert the building's security.

So the question is not just: How many other such accounts does Boebert have, but what accounts did she have before January 6? Also, since Boebert has already tweeted to say "if this was really Lauren's burner account don't you think it would have a lot more tweets?" that opens the question of how many tweets on this account, and others, Boebert has deleted.

But it is nice to know she's on a first name basis with herself.