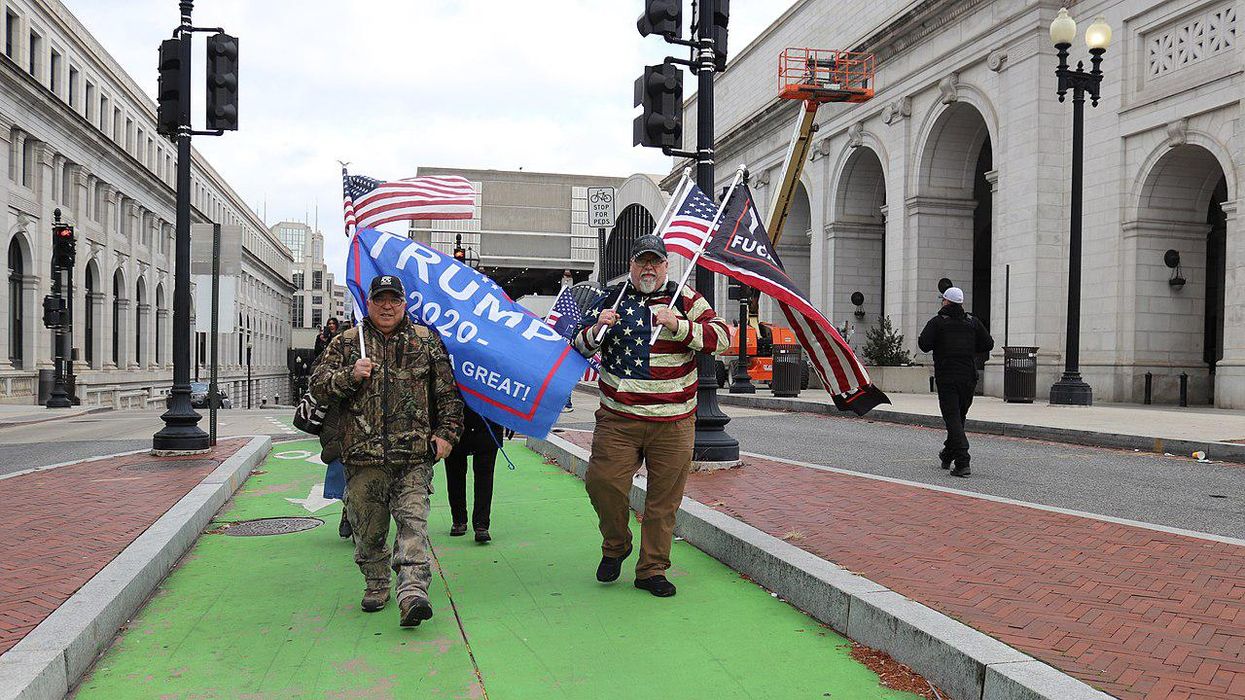 After losing to incumbent Democratic Rep. Ron Kind in Wisconsin's 3rd Congressional District in the 2020 election, far-right Republican Derrick Van Orden had some campaign funds left over — and according to the Daily Beast reporter Roger Sollenberger, he used some of that money to attend then-President Donald Trump's Stop the Steal rally in Washington, D.C. on January 6.

Van Orden is running for Congress again in 2022, and he has been endorsed by House Minority Leader Kevin McCarthy despite the fact that he openly promoted Trump's false claims of widespread voter fraud in the 2020 election.

In an article published by the Beast on June 27, Sollenberger explains, "Van Orden, a former Navy SEAL and small-time actor, has previously acknowledged attending the January 6 rally, but has repeatedly claimed he never entered the Capitol grounds. However, social media posts from the riot suggest that isn't true. A Facebook image from January 6 shows Van Orden standing on a wall on the Capitol grounds that was inside a restricted area. The Daily Beast recreated the photo on Friday and confirmed that Van Orden would have had to cross police barricades to reach that area."

According to Sollenberger, "As for Van Orden's campaign expenses surrounding January 6, it's unclear how they relate to Van Orden's attendance. Federal Election Commission regulations state that travel expenses must be 'directly related to the campaign.' Van Orden — who wrote off roughly $4000 in transportation and D.C. hotel costs around January 6 for him, his wife, and a campaign staffer — lost his race in November and didn't declare his 2022 candidacy until April."

Jordan Libowitz, communications director for the watchdog group Citizens for Ethics and Responsibility in Washington, doesn't see how traveling to Washington, D.C. to attend the Stop the Steal rally on January 6 qualifies as a campaign expense.

Libowitz told the Beast, "Campaign accounts are not personal slush funds. They must be used for campaign-related activities. Attempting to overthrow an election you just lost is not a proper campaign activity. If he did use his campaign to pay for travel for him and his staff to attend the rally-turned-insurrection, it would raise serious questions about his compliance with campaign finance laws."

In an op-ed published by the LaCrosse Tribune on January 13 — only seven days after the January 6 insurrection — Van Orden defended the Stop the Steal rally but described the assault on the U.S. Capitol Building as "one of the most tragic incidents in the history of our nation." And Van Orden wrote, "At no time did I enter the grounds, let alone the building."

Sollenberger points out that Van Orden isn't the only Stop the Steal attendee who is running for office in 2022.

"Van Orden's attendance at the Capitol puts him in league with a slew of political hopefuls who attended the insurrection and have since declared candidacies for office," Sollenberger observes. "What sets Van Orden apart, however, is his support from powerful House Republicans and his strong showing in last year's election. He lost by about 2.5 points to longtime incumbent Rep. Ron Kind (D-WI), who has held the seat since 1997…. Since April, he has scored support from McCarthy, as well as House Minority Whip Steve Scalise (R-LA) and newly minted conference chair Rep. Elise Stefanik (R-NY)."