In looking at the issues in South America on Tuesday, one thing was clear: Despite high levels of vaccination in countries like Chile and Uruguay, these nations are at or near record highs for new cases of COVID-19. Statistics from Our World in Data show that these examples are far from alone. Around the world, there are a number of nations that have high levels of vaccination, but continue to have new waves of COVID-19. Meanwhile, there are other nations—the United States among them—that have lower rates of vaccination, but have seen a dramatic drop in cases.

The current situation in the United States, and in other nations that have fallen well short of reaching the level of vaccination needed to restrict community spread, is far from a guarantee of future conditions. It's still possible, even likely, that the U.S. will experience a "fourth wave" of cases in the fall as indoor activities increase and Republican vaccine hesitancy leaves many areas with a high percentage of the population unvaccinated.

But some nations are already seeing a new wave of COVID-19. Driven by the Delta and Gamma variants, health care systems in many South American nations are now taxed at record levels. That's true in nations with vaccination rates significantly higher than in the United States, as well as those where vaccination rates are low. And the reason for this seems to be that the vaccines being used in those nations are simply not working to stop infections.

Part of that is China's fault. Part of it is ours.

When comparing vaccination rates in North and South America, there are some large inequities. The United States is well above one cluster of nations, but significantly below levels in Canada, Chile, and Uruguay.

But at the same time, North and South America look like not just different continents, but separate worlds when it comes to the rate of new COVID-19 cases. The overlapping rates of vaccination that seem to place both sets of nations on the same playing field break down into two very distinct groups when it comes to the current rate of new cases. In the north, the pandemic might even be seen to be over. In the south, it is very much raging. 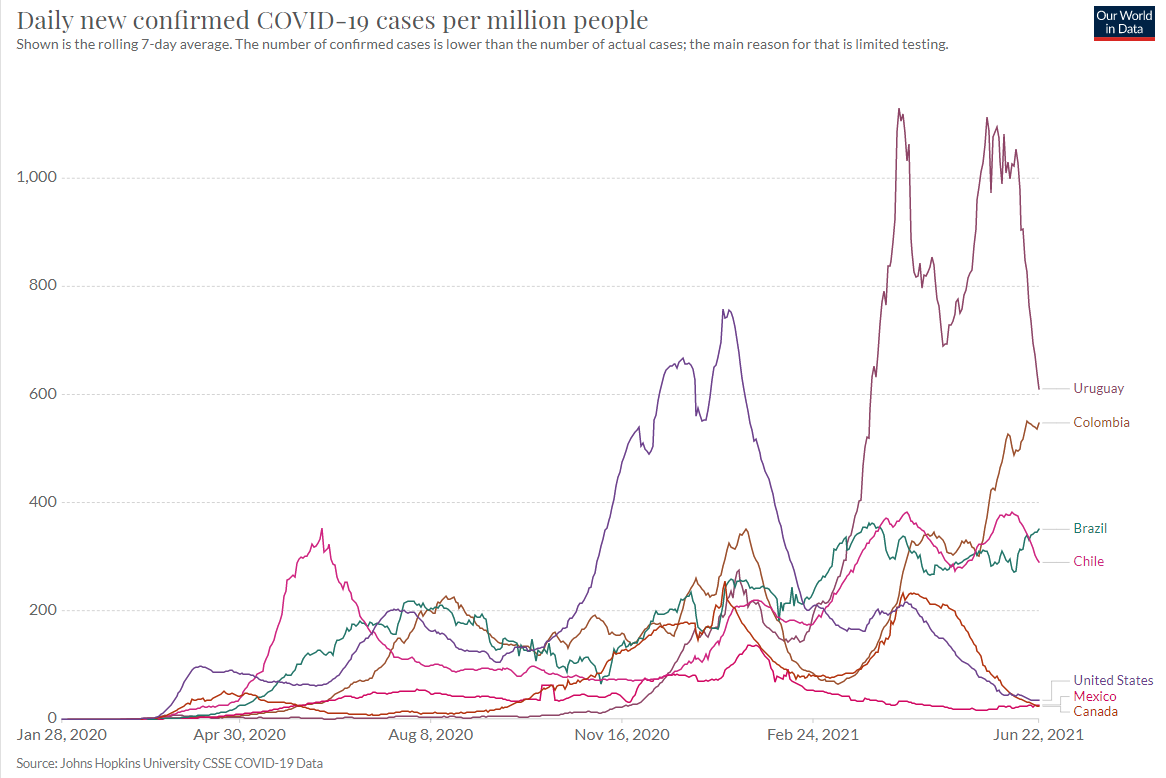 Rather than seeing a decline after the January peak, many of these nations are seeing a new wave that's far worse than previous levels. Uruguay has reached new infection rates equaling 1% of the total population each week. And yet, Uruguay is up there near the top of the chart when it comes to vaccination. Over 62% of its total population has received at least one vaccination. That's almost 10% higher than the United States.

So why is one nation recovering as the other is seeing a huge increase in cases? It's not the number of vaccinations—it's the type of vaccine.

While the United States has seen vaccinations from Pfizer/BioNTech, Moderna, and Johnson & Johnson, almost all the vaccinations in Uruguay and several other South American nations have been Sinovac, manufactured by China's Sinovac Biotech. The government of Uruguay insists that things are not as bad as those massive number of new cases may make them seem. As Reuters reported earlier this month, health officials in Uruguay claim a 90% reduction in trips to the intensive care among those who have been vaccinated, and a 95% reduction in deaths. But these values may be deceptive, and feeling reassured by them could be dangerous.

As The New York Times reports, over 90 countries are depending largely on Sinovac or other Chinese-developed vaccines. There are multiple reasons for this. One is that China has made these vaccines widely available at little or no cost. As diplomatic gestures go, this beats the heck out of shipping the world more cases of bombs. Another big issue is that not only are other vaccines more costly, they've largely been unavailable. That's because wealthy nations like the United States, the United Kingdom, and members of the European Union have locked up months of the available supply. The availability of some of these vaccines is still restricted even as factories are working full time to meet existing contracts in wealthy nations.

This is starting to change. In part, that's because some nations are now facing a vaccine glut. The United States has already begun distributing vaccines through the United Nations and World Health Organization and has promised 500 million more doses. The other members of the G7 have promised to also add 500 million doses to the table.

But for much of the globe, using vaccines from China has been a necessity, not a choice. Just as in Uruguay, countries like Mongolia, Bahrain, and the Seychelles relied heavily on Sinovac.

These are nations that set out to do the right thing for their people, launching aggressive vaccination campaigns early, and making the efforts in outreach and infrastructure to turn vaccines on shelves into needles in arms. All of these nations have a higher level of vaccination than the United States. All of them have a much higher rate of new cases. In fact, both Bahrain and Seychelles now "beat" the United States in terms of having a high per capita rate of cases across the whole pandemic, with most of those deaths coming after they had achieved good rates of vaccination.

Over the last seven days, WorldOMeters set the rate of new cases per million in the population within Seychelles at an astounding 10,000. Mongolia is over 5,000. Uruguay over 4,000. Meanwhile the United States is at 248, Canada is at 161, and Israel, which has a vaccination rate very close to that of the Seychelles, has a new case rate of just 41.

Have no doubt about it: With over 33 million total cases, no one did worse in handling this pandemic than the United States. China and South Korea, which faced early outbreaks, did better. European nations caught by an unexpected wave of cases did better. Tiny nations like the Seychelles did better.

But relying on Chinese vaccines is now placing nations at grave risk. Not only does the high rate of new cases mean that unrestricted community spread is still happening in nations dependent on Sinovac vaccine, it's far from clear that these nations really are protected against severe outcomes. In terms of deaths per capita, the names at the top of the charts right now are four South American nations (Paraguay, Suriname, Columbia, and Argentina) plus the Seychelles. Despite their higher level of vaccination, the Seychelles has a death rate that's currently 15 times higher than the United States. (However, results in Paraguay—currently topping the charts for daily deaths—can't be blamed on Sinovac. Vaccination rates in the country are less than 6%, and the government there seems to be waiting on a pair of vaccines made by Taiwanese companies, both of which are still undergoing trials.)

It was clear from the beginning that relative to the other vaccines being tested, Sinovac produced a lower immune response. Another Chinese vaccine, CanSino, was even worse. As The Atlantic reports, these vaccines are being pushed beyond their limits by new and more contagious variants.

Delta has gotten so much attention because it has the most troubling collection of traits yet: It is markedly more transmissible than Alpha, can sicken a large proportion of people who have had only one dose of a vaccine (though not those who have had two), and may even cause more severe disease. All of this is enough to be a warning, especially as Delta is now responsible for 10 percent of U.S. cases and rising.

Delta won't be the last variant. Viruses evolve to become more efficient at spreading. That's really the only evolutionary pressure they face. Each human infection gives the virus trillions of opportunities to find a combination that will be more contagious, as well as more evasive of vaccines. Not only are ineffective vaccines that fail to stop infection allowing this evolution to go forward, they could well do what overuse of antibiotics did with bacteria: help to increase vaccine evasion.

Right now, two doses of the Pfizer/BioNTech and Moderna vaccines (and one dose of Johnson & Johnson, followed by sufficient time without exposure) seem to be effective against the Delta variant. Sinovac is not. Despite Uruguay's claims that the vaccine has proven highly effective in preventing deaths, that nation is also currently in the top 10 when it comes to COVID-19 deaths per capita. That doesn't mean Sinovac has been effective in preventing deaths, but when the vaccine allows so many cases, a large number of deaths are still going to occur. That's why last week Costa Rica moved to reject delivery of Sinovac, saying that it is "not effective enough." With a vaccination rate of just 30%, Costa Rica could definitely use more vaccine. Also better vaccine. Hopefully, they'll get it.

But still ahead is Africa where, despite many nations having avoided the worst of the pandemic so far, case counts are increasing and vaccination rates remain low. The 1 billion doses of vaccine that the United States and its G7 partners have put forward is … about 4 billion short of what's needed.