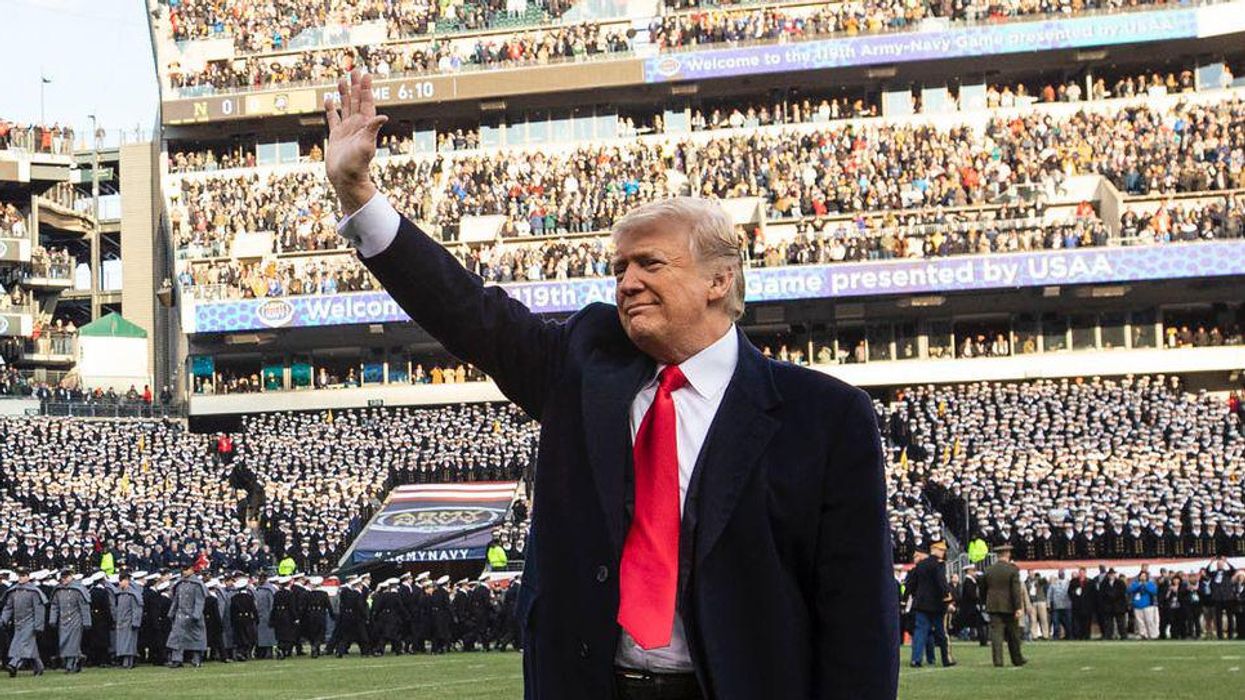 How do we know anything at all about the 74 million people who voted for Trump in 2020? Are they mostly racist? Sexist, homophobic, xenophobic? Are they white working-class males who suffer from status anxiety as the U.S. population grows more diverse? Are Trump supporters wealthier voters or poorer? Are they anti-elites, or elites themselves? Are working people becoming the core of the Republican Party, as Senator Josh Hawley proclaimed on election night? Or did Joe Biden bring them back into the Democratic fold?

Answers to these questions traditionally come from exit polls supplemented by what we hear from political commentators, labor union officials, and community leaders. An NBC poll (February 21, 2021) reported that the news is not good for labor progressives:

The GOP is rapidly becoming the blue-collar party.
In the last decade, the percentage of blue-collar voters who call themselves Republicans has grown by 12 points. At the same time, the number in that group identifying as Democrats has declined by 8 points.

Are working people really flocking to the party of their bosses? Or are the polls really screwed up? Given the massive polling errors during the Trump elections, there is reason to be skeptical. Just recall the pre-election polling of the critical "Blue Wall" states. On the morning of November 3, 2020, Nate Silver's FiveThirtyEight poll-of-polls had Biden up by 8.4 percent in Wisconsin, 7.9 percent in Michigan and 4.7 percent in Pennsylvania. That forecast was off by 3.5 percentage points in Pennsylvania, 5.1 points in Michigan and a whopping 7.8 points in Wisconsin, thereby underestimating the Trump vote by 16.4 points in these three key states alone. And in the Senate race in Maine, the poll-of-polls had Susan Collins losing by 8 percent the day before the election. She won by 10.6 percent. Exit polls, which analyze who voted for whom demographically, are even less accurate.

This is why we have been searching for another way to determine whether or not the political inclinations of white working-class voters are radically different from their Black and Brown brothers and sisters. Is it possible that the polls are missing critical features that bind working-class people together rather than divide them by racial and ethnic identities?

Asked another way: Is there an alternative to polls?

Yes. Political polling can be avoided by examining the actual election results, precinct by precinct, and then linking those precincts to the census tracts that contain those precincts. This approach doesn't rely on any political questions and therefore is not subject to misleading subjective responses to hot-button issues. It also doesn't depend on whether someone tells the pollster the truth, or doesn't recall their vote correctly, or if the poll sample is skewed. The Census doesn't ask people their political preferences or their stances on various issues, or even their religion. It just gathers information on hundreds of demographic features like race, ethnicity, age, gender, income, occupation, housing, and the like.

Since we know the actual results in each election district and since we know the demographic information of the neighborhoods connected to each voting district, we are able to determine (to a high degree of certainty) if neighborhoods with more white working-class people disproportionately support Trump. To do this, we use a statistical method called multiple regression.

A Few Notes on Methodology

There are limitations using this approach to be sure. Polling, while imperfect, does have the benefit of tying individuals and their characteristics to their individual behaviors (how they say they voted). This provides a more fine-grained analysis assuming that the responses and polling samples are reasonably accurate. Using census data is constrained by the fact that we are looking at how groups (neighborhoods), not individuals, are voting, and therefore there will be more uncertainty since neighborhoods are not demographically coherent. So pick your poison: Use polls that may be skewed due to the passions Trump engenders, or focus on neighborhood census data which is less precise, but free from the Trump phenomena. We're going with the neighborhood approach.

What the Study Found

Our study focuses on 3,058 voting precincts and their surrounding neighborhoods in the all-important swing state of Pennsylvania.

Finding #2: The Pennsylvania white working-class neighborhoods do not form a coherent political entity. They are divided politically by higher and lower paying occupations.

Blue-collar job categories (23.3 percent of the state's occupations) include:

Our statistical method allows us to focus in on the white workers in these occupations.

Read the above chart as follows: For every one standard deviation increase in the neighborhood variable in the demographic column, what is the percentage increase or decrease in the Trump vote, holding all the other variables constant? For example, if the percentage of Black residents in an average neighborhood goes up by one standard deviation (about 21%), the Trump vote would go down 11.5% holding constant all the other independent demographic variables.

And to be clear:

The blue-collar occupations in our study earn wages that are near or above the median hourly wage for the state, which is $18.99 per hour. While Trump has modest support from Low Service and Blue-Collar white women, the guts of his white working-class support seems to be centered with more middle-income blue-collar white men.

This suggests that millions of white male working people in low-paying service industry jobs—from waiting tables to cleaning building—did not support Trump. And there is only weak support for Trump among white women in the same occupations.

Finding #3: Pennsylvania neighborhoods with increased percentages of Hispanic residents between 2010 and 2019, increased their support for Trump between 2016 and 2020.

This is a shocker.

There are two very different theories that might explain this disparity. The first is that a significant number of Hispanic voters may have increased their support for Trump in Pennsylvania for reasons similar to the shifts that took place in southern Florida and Texas. Perhaps more Hispanic middle class/small business owners in Pennsylvania viewed Trump's economic policies as good for their work and standard of living. Perhaps more had become involved in law enforcement, which Trump strongly supported. Perhaps more believed Biden was too "socialistic" and would head the country towards the problems of Cuba and Venezuela.

A second explanation, based on "the Great Replacement" theory, is more novel. It comes from a study produced by the Chicago Project on Security and Threats at the University of Chicago which examined the characteristics of the 377 individuals who took part in the Jan 6th riot at the Capitol, and who have been charged with crimes. The study claims that the insurrectionists were very likely to come from counties in which the Hispanic populations were increasing relative to the white population: "Odds of sending an insurrectionist is six times higher in counties where the percent of non-Hispanic whites declined." Furthermore they report, "Among Americans, believing that Blacks and Hispanics are overtaking Whites increases the odds of being in the insurrectionist movement three-fold."

In our study, there was a significant correlation between the increased percentages of Hispanic residents in "more-for-Trump" precincts from 2010 to 2019. This was not the case in "less-for-Trump" precincts. So it is possible that that Hispanic voters themselves did not shift to Trump. Rather, it might be the case that neighboring white voters increased their vote for Trump as the percentage of Hispanics increased all around them. Perhaps, this demographic shift triggered "replacement" anxieties among a growing number of white residents of all classes.

The University of Chicago study also provides a cautionary tale about our perception of the January 6th rioters. Those charged with crimes did not come only from white working people. The study found that 14 percent of those arrested are business owners and 30 percent are white collar. These groups include: "Owner, Ameri-I-Can Ammo; CEO, marketing firm Cogensia; Owner, Wholesale Universe, Inc.; Owner, Matador Sport Fishing; Google Field Operations Specialist; Regional Portfolio Manager at BB&T Bank; Doctors, Attorney, and Architects."

(And let's not forget the three Texas real estate agents who got arrested after flying in on a private jet, as well as the eight financial elites from Memphis who arrived on their private Bombardier Challenger 300 jet.)

These reports suggest that the Trump phenomena should not be heaped solely on the backs of the white working-class. Trump's base also includes a large percentage of well-to-do professionals and entrepreneurs. Nevertheless, there are far more Trump supporters in the ranks of labor than working class leaders (and labor educators) ever wanted to see, especially among the better paid, blue-collar workers.

For those of us doing educational work in the labor movement, the message is crystal clear: Stay on it …and then some!

Acknowledgements: A deep debt of gratitude to Peter Kreutzer for his data wizardry and editorial support. Also thanks to Kris Raab and Sharon Szymanski for their edits and sage comments. Thanks to Bob Kuttner for his tough-love read of the first draft. And special thanks to Professor Michael Parkin of Oberlin College for his statistical guidance, and for the generous donation of his time to this project. Any and all methods and findings, however, are the sole responsibility of the author.

Les Leopold, the director of the Labor Institute in New York is working with unions, worker centers and community organization to build a national economics educational campaign. His latest book, "Runaway Inequality: An Activist's Guide to Economic Justice" (Oct 2015), is a text for that effort. His previous book is "The Looting of America: How Wall Street's Game of Fantasy Finance destroyed our Jobs, Pensions and Prosperity, and What We Can Do About It" (Chelsea Green/2009).
From Your Site Articles
Related Articles Around the Web
Report typos and corrections to: feedback@alternet.org.