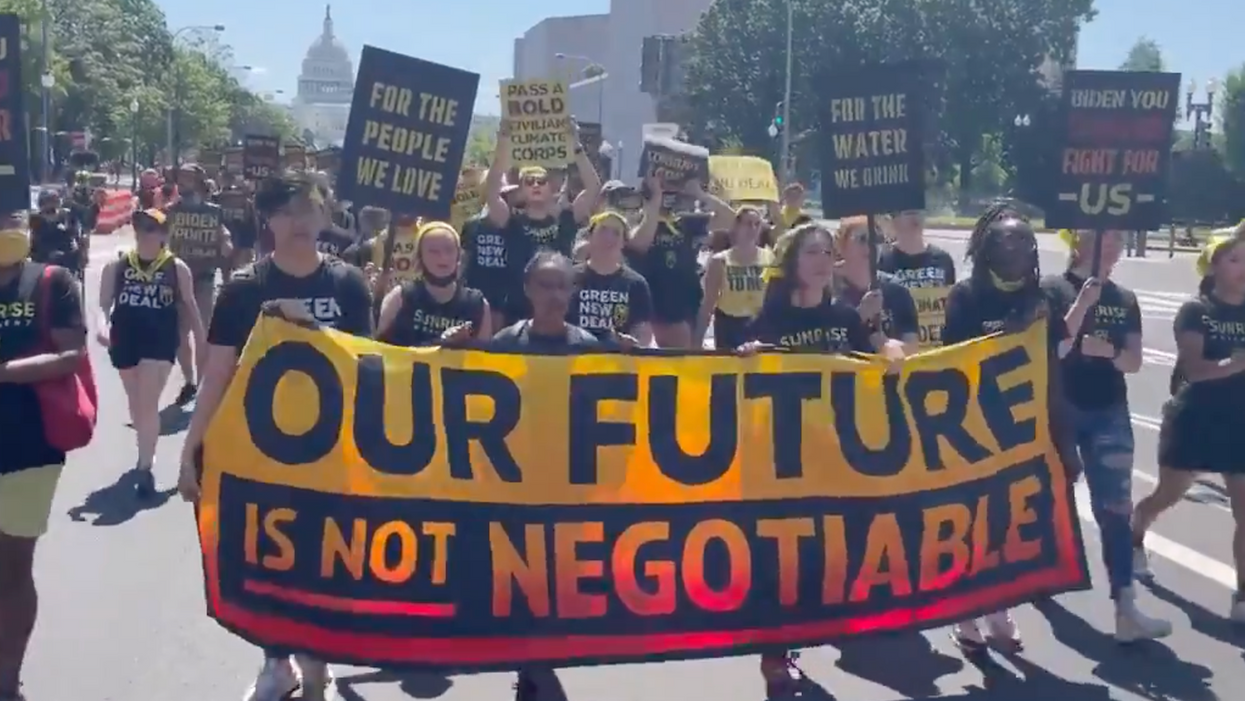 Hundreds of activists with the youth-led Sunrise Movement marched through the streets of Washington, D.C. and converged on the White House Monday to make clear they have no intention of dropping their call for an infrastructure package that includes robust investments in green energy and public works, particularly a New Deal-inspired Civilian Climate Corps.

In a statement, Sunrise executive director Varshini Prakash dismissed as a "performative bipartisan stunt" the $579 billion infrastructure agreement that President Joe Biden reached last week with a group of Republican and Democratic senators.

To the dismay of scientists and activists, the deal excludes key climate proposals that Biden put forth in his original $2.2 trillion American Jobs Plan, such as $300 billion in tax credits for renewable energy projects and a national clean energy standard, which experts say is necessary to meet the president's goal of cutting U.S. carbon emissions in half by the end of the decade.

"We have a historic, narrow opportunity to combat the climate crisis," said Prakash. "Joe Biden's American Jobs Plan was already a compromise, and the science dictates we need at least $1 trillion per year over the next decade. When Democrats agree to water it down more, they're flooding our homes, disillusioning young people from the political process, and jeopardizing the future of a Democratic majority."

With banners reading "Our Future Is Not Negotiable" and "Biden You Coward, Fight for Us," Sunrise activists carried their demands for bold climate action to the White House on Monday as the president and Democratic lawmakers insist they will make up for the glaring inadequacies of the bipartisan deal with a reconciliation package that includes popular green energy investments and other priorities.

At one point during the demonstration, activists barricaded White House entrances, risking arrest:

"We do not have any time to waste," one young activist said in a fiery speech at the White House rally, which came as a record-shattering heat envelops the Pacific Northwest and as the Northeast braces for a dangerous heatwave of its own. "Politicians, they have been selling out our generation for decades to fossil fuel CEOs and billionaires."

"If the media won't make the climate crisis too loud to ignore, somebody has to," said Mattias Lehman, digital director at the Green New Deal Network. "Can you hear us, Joe?"

Sunrise activist Nikayla Jefferson said that she took part in Monday's demonstration because the bipartisan infrastructure deal, "after rounds of performative concessions to the Republican minority, worsens the crisis of climate, and leaves the millions of Americans that elected you on the promise of good-paying jobs without secure employment or a livable wage."

"We elected you—the youth vote carried the election. If you are going to negotiate on our lives and livability of our planet, negotiate with us," Jefferson continued. "So we will sit here until you commit to the side of climate justice, commit to an American Jobs Plan written with bold ambition against the climate crisis."

Specifically, the Sunrise Movement is pushing Biden and congressional Democrats to advance legislation that invests $10 trillion in climate and infrastructure over the next decade, in line with expert recommendations.

"The fact of the matter is that not a single proposed package meets the scale, scope, and speed of the crises we face," Lauren Maunus, Sunrise's advocacy director, said last week. "We cannot afford any further delay, compromises, or excuses."

Sunrise activists delivered a list of three broad demands to the White House on Monday:

Speaking to demonstrators outside the White House Monday, Rep. Alexandria Ocasio-Cortez (D-N.Y.) said that "what a lot of folks here in D.C. don't understand is that while this may be the hottest summer of their lives, it's going to be one of the coolest summers of our lives."

"And so what that means is that they brought this heat on us," the New York Democrat added, "so we bring the heat on them."