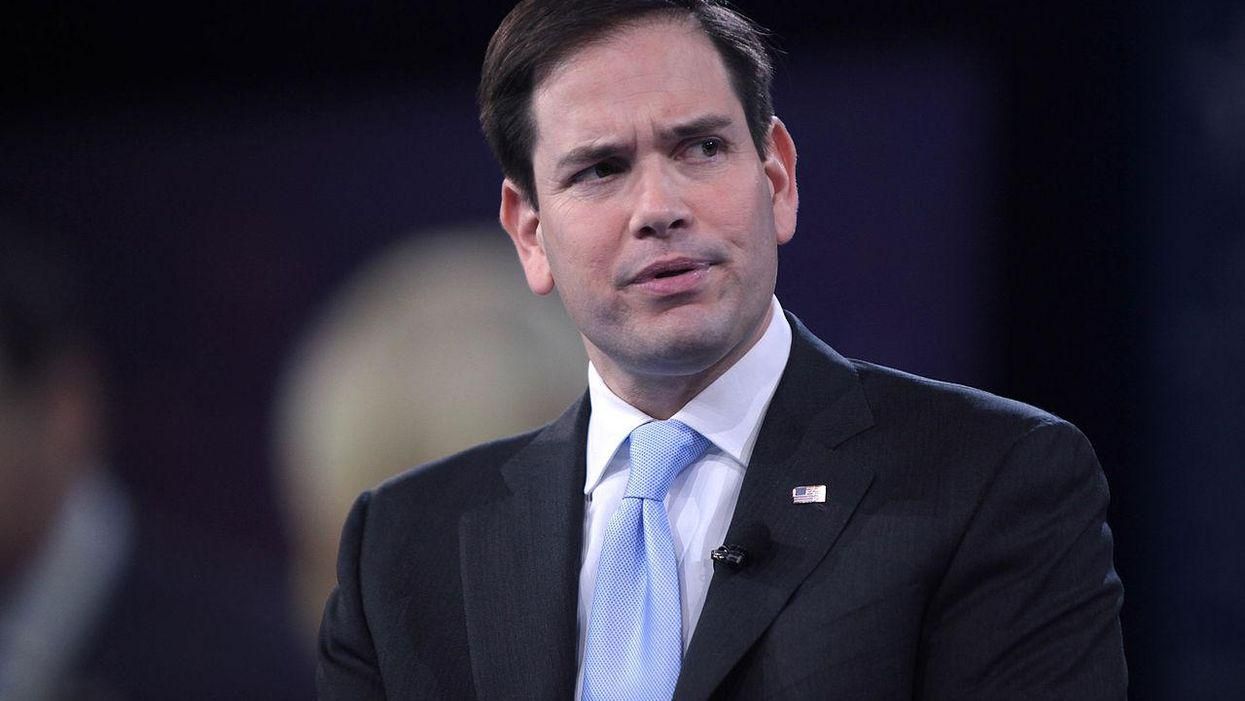 One of the reasons why Donald Trump was so successful in wiping the floor with the Republican field in the 2015 GOP primaries was the fact that every single other Republican running was demonstrably cowardly and duplicitous. This isn't to say that Donald Trump wasn't equally cowardly and duplicitous, but because he was less of a known political figure, his lambasting of people like Jeb! and Marco Rubio and Ted Cruz and John Kasich delighted both conservatives and liberals alike. While Trump was also projecting his own vile intentions and heart upon others, he wasn't lying about the grotesqueness of these politicians' lack of integrity.

The entire political sphere proved him right in fact. The same conservative operators that pointed out how racist and incompetent and awful a potential leader Trump would be all ended up working for him and continue to remain complicit in the misinformations he helped focus against our democracy.This is why calling Florida man Marco Rubio "lil' Marco" remains a term used by the entire gamut of the political spectrum. The withering misery that is lil' Marco Rubio continues to this day. With the announcement by Democratic Rep. Val Demings of Florida that she plans to run for the lil' Senator's seat, the bad bible Rubio went to his social media accounts to insult and lie and generally freak out loud about Val Demings. Rubio's attempts at snark and political point-building failed miserably, as every single social media screech he made was covered in an avalanche of responses.

Rubio began by pinning a video tweet of him insulting Demings and characterizing her as a "far-left, liberal Democrat." Demings poses a real threat to Rubio not because of the blue D next to her name, but because she's a former police chief in Florida. The lazy conservative narrative that the Democratic Party is going to give poor people of color your middle class home by ending law enforcement is going to be a harder sell for the waterlogged mind of Marco.

Rubio subsequently tweeted out a video of conservative boogeyman Rep. Ilhan Omar of Minnesota with the header "Val Demings votes with [emoji pointing to clip] over 90% of the time." If lil' Marco wants to talk about voting records…

And as the day progressed, the Twitterverse let Marco know what they thought about this upcoming election.

Newly-minted US Senate candidate @valdemings responds to @marcorubio criticism of her as a "do nothing" member of C… https://t.co/XOlXmDqfuD
— Gary Fineout (@Gary Fineout) 1623266772.0

And let's be clear. Marco Rubio isn't innocuous because of his diminutive levels of integrity.

@marcorubio #1 in constituent services? It’s been 5 years since the shooting you used as leverage to revive your po… https://t.co/SxPgreSXUo
— Brandon Wolf (@Brandon Wolf) 1623240375.0

And Marco retreated to throwing a dart at his copy of The Weymouth New Testament.

@marcorubio Not that I’m even remotely qualified to do my job; rather I will literally take credit for everything.… https://t.co/9T6g76l6VU
— PoliticOhMyGawd (@PoliticOhMyGawd) 1623245576.0

We can only hope Floridians are allowed to get out and vote the way our democracy is supposed to work. If that happens, Rubio will likely just start tweeting out entire epistles written by Paul.