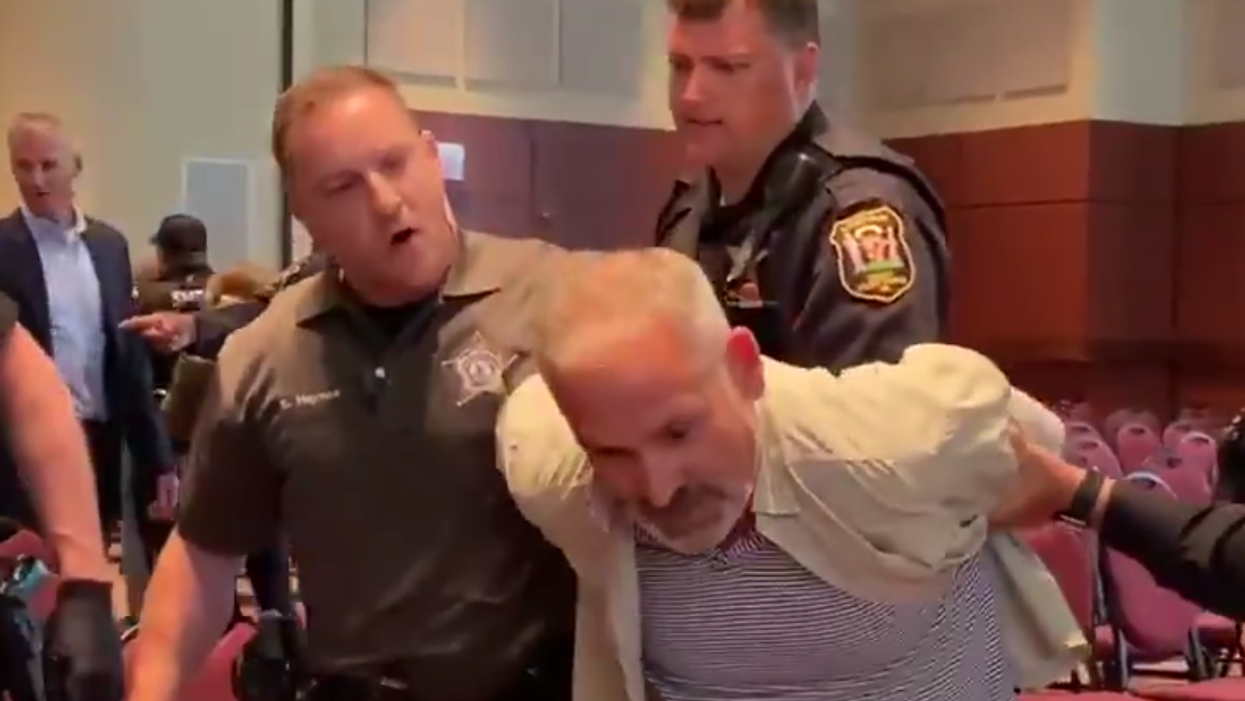 Loudoun County is an affluent suburb outside of Washington. Its public school board held a meeting last night. It was cut short. According to the Loudoun Times-Mirror, the board unanimously voted to end a period of public comment "after a capacity crowd descended into shouting and after numerous requests that attendees remain silent were not heeded." Loudoun County Sheriff's deputies cleared the meeting room. Some protesters were frog-marched out. Videos of the evening went viral on social media.

That's why I'm bothering telling you about what would otherwise be a local event of no consequence to national politics. I think what happened last night is something we're probably going to see more of in the weeks ahead. It has the feeling of a "Tea Party"-style "movement" in which "righteous" Americans "revolt" against the "infringement" of their liberties. It's premised on a garbage pile of lies, but lots of white people in this country are willing to believe them, because lies tell them what they want to believe. They see themselves as victims. They will prove it, though the proof is delusional.

By the time the press corps picks up the story, the truth will be lost and the reported "controversy" will be about what liberalism's enemies say liberals say, boxing out of "debate" almost entirely what liberals themselves say they say.

It all began when Virginia State Senator Dick Black blasted the board for a decision regarding a teacher at Leesburg Elementary School. That teacher is Byron "Tanner" Cross. Cross was put on administrative leave after remarks he made last month during a public comment period. During that period, Cross promised to disobey a proposed rule that would require teachers to recognize "students' preferred gender pronouns or names if they choose to not identify with the gender they were assigned at birth."

"If his comments were not protected speech, then free speech does not exist at all," Senator Black said before adding, that, "It's absurd and immoral for teachers to call boys girls, and girls boys." According to the Times-Mirror, he also accused to Loudoun County Public Schools of "teaching children to hate others because of their skin color." The crowd reportedly roared. It did not stop. That's when the board ended the meeting. That's when the handcuffs came out. That's when the videos went viral.

If the right-wing media apparatus, which is global in scale, had its druthers, that's where things would stand—with images of righteous (read: white) Americans standing up for what they believe in for the sake of their children and their liberty. And to be honest, that's where things will stay for a lot of people, because most people are casual consumers of news, which is to say they have better things to do than pay attention to politics. But it doesn't take much to see all this is staged to look worse than it is.

First, telling the school board you promise to break a proposed rule is kinda sorta begging for a reprimand, and no, the US Constitution does not protect you against being reprimanded for promising to break a proposed rule.1 Second, and important to a revamped "Tea Party," is that the board has repeatedly denied Loudoun schools are "teaching children to hate others because of their skin color." But that fact can't compete with a belief, manufactured by a right-wing media apparatus, which is global in scale, that a critical race theory is hiding behind every bush and tree in America.

As I mentioned recently, critical race theory is a useful mode of intellectual inquiry whose precepts you don't really need to understand because the people making all the noise about critical race theory don't care about understanding them.2 They "know" everything they need to "know" about it, and what they "know" is that it's anti-white. It's not anti-white, but that fact falls on deaf ears same as the Loudoun County school's denial of teaching critical race theory falls on deaf ears. These people believe the garbage pile of lies being fed to them by a right-wing media apparatus, which is global in scale, because the lies tell them what they want to believe. Democracy is producing results without their OK. Democracy leaving them behind is tyranny.

None of this will do too much damage to public opinion as long as stays on Fox et al., but that's probably not going to happen. With a Democrat is in the White House, the Washington press corps has the incentive to start paying attention, and once it does, the right-wing media apparatus, which is global in scale, will be, in effect, the sitting judge of who gets to say what when, where, why and how. By the time the press corps picks up the story, the truth will be almost entirely lost and the "controversy" will be about what liberalism's enemies say liberals say, boxing out of the "debate" almost entirely what liberals themselves say they say. Even as these people demand their freedom of speech, what they're also doing is shutting down speech. Two hundred and forty-nine people were scheduled to speak during last night's period of public comment. Thanks to just one raging idiot, only a sixth of them got to have their say.