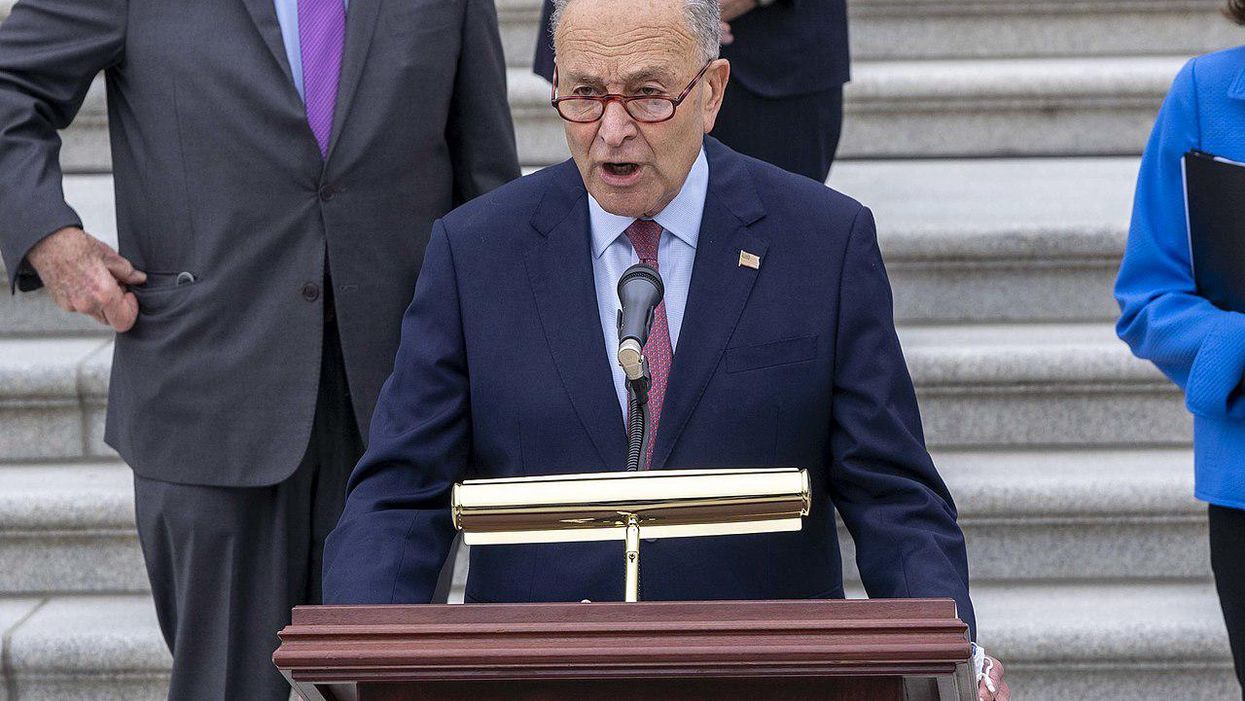 Elizabeth MacDonough, the Senate Parliamentarian, snuck in a new ruling last Friday before the Senate took off for Memorial Day recess—a bizarre ruling. McDonough, an ostensibly nonpartisan official who is in charge of deciding what falls within the current Senate rules, seems to have exceeded her authority in declaring what is and isn't off limits for Democrats in enacting President Biden's agenda by basically telling Democrats they can't use budget reconciliation to pass bills to avoid the filibuster.

Which raises many questions. Like how does the parliamentarian decide when it's being done just to avoid filibuster? And how does that have any bearing at all on whe

The biggest hurdle she throws in Schumer's way is saying it would have to go through a committee process and pass out of committee—getting Republican votes—before it could move to the floor. Democrats would need at least one Republican on the evenly split Budget Committee to support revising the fiscal 2021 resolution to pass Biden's agenda using budget reconciliation. Which is not going to happen with this Republican conference.

Regular budget resolutions can be automatically discharged from the committee to the floor without a committee vote anytime after April 1. Now she's saying that any revised budget resolution with reconciliation instructions to pass new stuff, like infrastructure, has to go through committee—where Republicans can block it. She also now says that the process should be reserved for situations involving "sharp revisions in the revenue or spending estimates or major developments in the economy."

That's a pretty big departure from what she told Schumer in April. It puts Biden's infrastructure proposals—both the American Jobs Plan and the American Families Plan—in jeopardy, given Sen. Mitch McConnell's 100% commitment to blocking Biden from doing anything. Apparently MacDonough hasn't been asked to rule on whether a filibuster that doesn't actually contain any debate actually counts as "extended debate" in parliamentary terms, and should be allowed. Particularly when it's not about debate but about obstruction. Maybe Schumer can get her to make a ruling on that next.

Meanwhile, President Biden met with Republican Sen. Shelley Moore Capito again on Wednesday to discuss infrastructure, after Capito got her marching orders from McConnell. There's no indication that she, or fellow Republicans, will move away from their stance that taxes on the wealthy and on corporations can't be hiked to help pay for it, or that the money has to be taken from already appropriated coronavirus relief funding.

The U.S. Conference of Mayors, National League of Cities, and National Association of Counties have weighed in on that idea. They hate it. In a letter sent to leadership and every member of Congress, they write: "Local governments are using these critical recovery funds to invest in public safety, vaccine distribution, housing and rental assistance, local economic support, economic and workforce development, broadband expansion, social safety-net services, hospitality and tourism development, and hazard pay for public employees.

"Despite the obvious and critical need for these dollars, there have been recent Congressional proposals to clawback these funds. We oppose these proposals, both in general and as a pay-for for infrastructure," they continue. "In order to help our economy further recover and compete globally for decades to come, we continue to urge Congress to pass a comprehensive infrastructure package that addresses our nation's transportation, water, clean energy, broadband and workforce development needs, but not at the expense of reducing funds already authorized under the American Rescue Plan Act."

That's going to be damned hard to achieve now, unless something in the Senate breaks. That means Joe Manchin and Kyrsten Sinema waking up to reality on the filibuster, Schumer ignoring or firing MacDonough, or all of the above. Because nothing good is going to happen for the country as long as McConnell has the power to stop it.

ther a bill fits budget reconciliation rules? Like if a bill completely adheres to all the budget reconciliation rules but she thinks Democrats are deciding to push it through because Republicans are going to filibuster it, she's going to declare it out of order? That would definitely be overstepping her bounds by making political judgments on legislation. If Republicans were in power, they'd fire her for that. They've done it before.

This new guidance is supposedly meant to clarify her ruling from early April, when she said that Majority Leader Chuck Schumer could have at least two more opportunities this year to use budget reconciliation to pass infrastructure or other legislation. Budget resolutions have special rules that allow them to pass with a simple majority vote, bypassing the 60-vote majority filibuster.