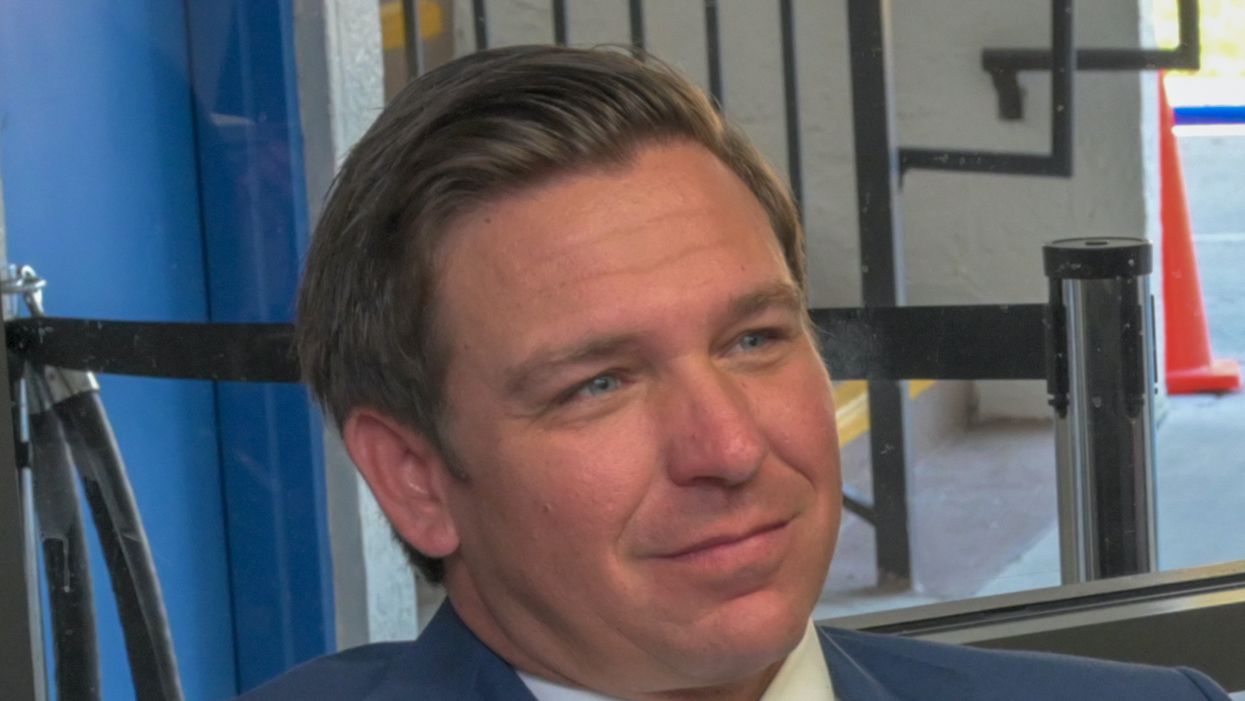 Want to nip Ron DeSantis' likely 2024 presidential bid in the bud? Tell the kaiser of GQP-land there's another rooster in the henhouse. If there's one thing a cult leader won't abide it's a threat to his authority.

It's way too early to determine which malodorous heap of seething white grievance and unworkable ideas will rocket to the head of the Republican pack in 2024, but at least one straw poll indicates Donald Trump's vise-like grip on the party's pendulous, purpling nads could be loosening in favor of one of the big man's most loyal surrender-generals in his non-fight against COVID.

Ron DeSantis, who did more than any other governor to spread freedom phlegm throughout the lower 48, was the winner of a recent straw poll asking conservatives about their 2024 presidential preferences.

On Saturday ... Florida Gov. Ron DeSantis (R) edged Trump in a straw poll taken at the Western Conservative Summit in Denver. In-person and online attendees were asked to vote for all the potential candidates they approve of out of a 31-person field. Trump and DeSantis were neck-and-neck at the top, but there was some hefty distance between them and the third-place finisher, Sen. Ted Cruz (R-Tex.). Former Vice President Mike Pence finished 10th.
Obviously, at this stage, a straw poll could simply be a mirage, but DeSantis has looked like a contender elsewhere, finishing second to Trump in the 2024 straw poll conducted at the Conservative Political Action Conference in February. Trump has also said, if he does make another bid for the White House, he'd consider the controversial, but popular governor as a potential running mate.

Up until now, DeSantis has been a loyal Trump acolyte, but knowing Trump, this has already gotten underneath his skin. DeSantis can expect a severed manatee head on his pillow any day now.

Interestingly, Mike Pence, the man who perfected the art of assembling IKEA furniture inside Donald Trump's sigmoid colon, was way down the list in 10th place—probably for the same reason he got heckled at an ultra-conservative Faith & Freedom convention last week. His political career turned a whiter shade of pale as soon as he refused to overturn the 2020 election in his own favor—a show of insolence that enraged his master. And now he's milquetoast. (Or more so, anyway.)

Even Donald Trump Jr., who's more amphetamine than man at this point (maybe; people are saying; many, many people), edged out Pence.

But Donald Trump can only screw over one potential rival at a time, and for the moment, that appears to be DeSantis.

Do your thing, baby-man. Cut DeSantis off at the knees. You know you want to.