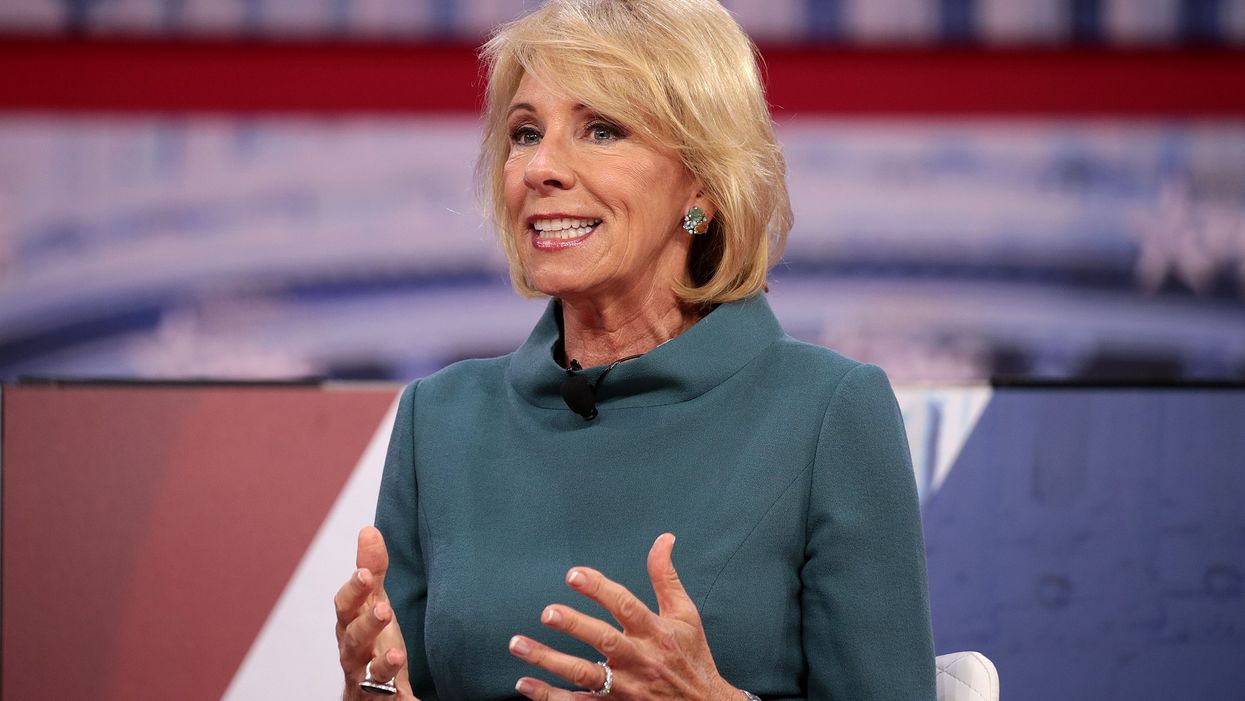 Reagan National University in Sioux Falls, South Dakota, is no longer an accredited university. To anyone with half an education, this is no surprise. The only reason the school had received accreditation in the first place was because under previous Education Secretary Betsy DeVos, the dubious Accrediting Council for Independent Colleges & Schools (ACICS) was resurrected to give it the distinction. This is a school that USA Today investigated and found had "no students, no faculty and no classrooms."

On June 2, the Biden administration's Education Department announced that Reagan National University lost its accreditation and would no longer receive federal funds for the no students, no classrooms, and no faculty that it never had. In fact, Deputy Undersecretary for Education Jordan Matsudaira wrote that ACICS would no longer be recognized as a worthwhile arbiter of which schools should and should not receive federal funds. "ACICS's significant and systemic non-compliance with multiple regulatory recognition criteria leaves me no reasonable option but to terminate its recognition, effective immediately."

After the ACICS had accredited ITT Tech, Corinthian Colleges, and Brightwood College—all for-profit schools that closed after stealing billions from students and cheating them out of an education—President Barack Obama stripped the agency of its powers. DeVos and Donald Trump then reinstated the disgraced agency's powers, and one of the first places ACICS accredited was the student and faculty-free Reagan National University. As USA Today found when they investigated the school last year:

The university's president – Harold Harris, per the school's website – was similarly invisible. University presidents often serve as an institution's public face. The only face on Reagan National's site was the institution's namesake U.S. president. The president of the university on the South Dakota business license was listed as "Xuanhua Fan."

Only the best people. The Biden administration's move means that about 60 colleges that received their accreditation from ACICS will now have "18 months to find a new accreditor if they want to keep accessing federal money." For its part, ACICS told the press that it will be appealing this decision and, according to a statement put on ACICS' website:

ACICS will appeal the SDO decision to the Secretary. We have worked too hard over the past five years to strengthen our organization, our accountability, our procedures, and accreditation criteria not to fight this decision. All that we ask is that a decision regarding our continued recognition be driven by the improvements we have made and our effectiveness as an accreditor today, not by policy priorities and outside pressure from political activists. Every accreditor should be given that opportunity. And every accreditor should be deeply concerned if our appeal to the Secretary is denied.

I mean, accrediting a school with no faculty and no student body is "no bueno." (That's first-year, high school language Spanish for "no good.") Maybe ACICS will give me accreditation as a Spanish language teacher? They shouldn't, but they just might!

Career staffers at the Education Department concluded in January that the ACICS had done a poor job of training employees to conduct site visits, failed to address conflicts of interest and lacked the finances to sustain itself in the long term. Months later, the National Advisory Committee on Institutional Quality and Integrity in an 11-to-1 vote recommended the council be stripped of its authority.

The DeVos Education Department, like the rest of the Trump administration, seemed driven entirely by billionaire profiteering, using fearmongering and white supremacist dive and conquer tactics. Students, as a rule, disliked DeVos' ideas because it's hard to respect an adult who doesn't respect you. Like many in the last swamp-filled administration, DeVos seemed to either be so ignorant that she treated students like they did not know any better, or treated them that way because she thought they were unintelligent. Maybe it isn't a binary. Maybe she's just so ignorant that she believes everyone else is more ignorant than she?