Clear sign of climate change: Western fires are burning higher in the mountains at unprecedented rates

The Rim Fire in the Stanislaus National Forest near in California began on Aug. 17, 2013 and is under investigation. The fire has consumed approximately 149, 780 acres and is 15% contained. U.S. Forest Service photo.
The Conversation
May 25, 2021Bank

The Western U.S. appears headed for another dangerous fire season, and a new study shows that even high mountain areas once considered too wet to burn are at increasing risk as the climate warms.

Nearly two-thirds of the U.S. West is in severe to exceptional drought right now, including large parts of the Rocky Mountains, Cascades and Sierra Nevada. The situation is so severe that the Colorado River basin is on the verge of its first official water shortage declaration, and forecasts suggest another hot, dry summer is on the way.

Warm and dry conditions like these are a recipe for wildfire disaster.

In a new study published May 24, 2021, our team of fire andclimate scientistsand engineers found that forest fires are now reaching higher, normally wetter elevations. And they are burning there at rates unprecedented in recent fire history.

While some people focus on historical fire suppression and other forest management practices as reasons for the West's worsening fire problem, these high-elevation forests have had little human intervention. The results provide a clear indication that climate change is enabling these normally wet forests to burn.

As wildfires creep higher up mountains, another tenth of the West's forest area is now at risk, according to our study. That creates new hazards for mountain communities, with impacts on downstream water supplies and the plants and wildlife that call these forests home. 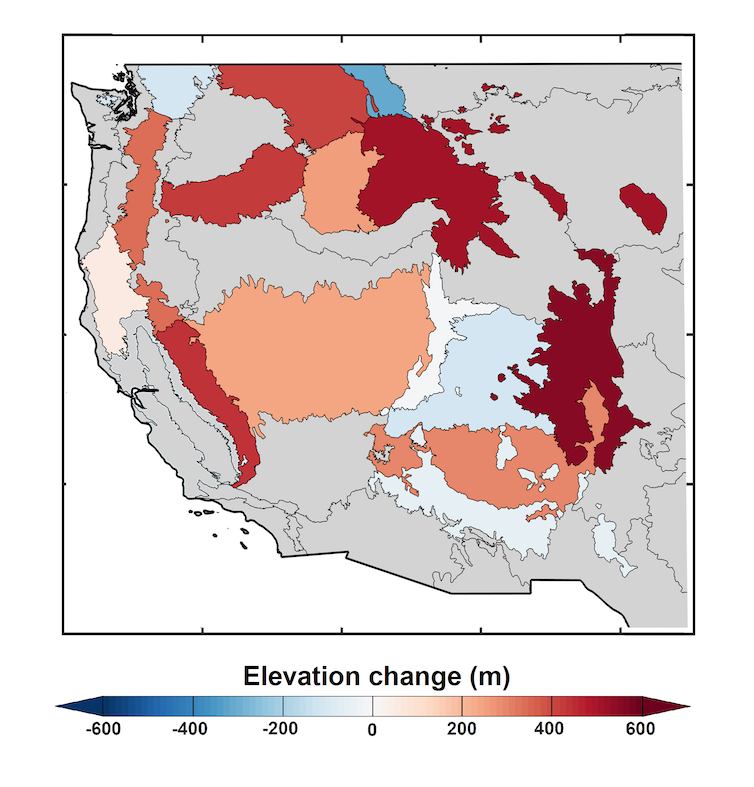 In the new study, we analyzed records of all fires larger than 1,000 acres (405 hectares) in the mountainous regions of the contiguous Western U.S. between 1984 and 2017.

The amount of land that burned increased across all elevations during that period, but the largest increase occurred above 8,200 feet (2,500 meters). To put that elevation into perspective, Denver – the mile-high city – sits at 5,280 feet, and Aspen, Colorado, is at 8,000 feet. These high-elevation areas are largely remote mountains and forests with some small communities and ski areas. 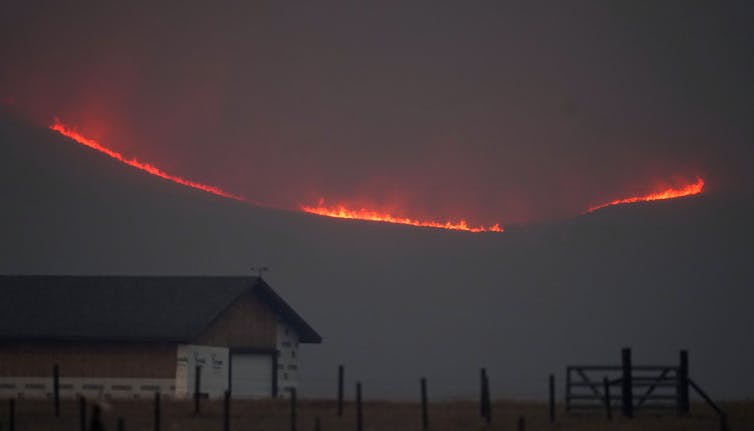 One of Colorado's largest wildfires, 2020's East Troublesome Fire, crossed the Continental Divide and was burning at elevations around 9,000 feet in October, when snow normally would have been falling.

Our results show that climate warming has diminished the high-elevation flammability barrier – the point where forests historically were too wet to burn regularly because the snow normally lingered well into summer and started falling again early in the fall. Fires advanced about 826 feet (252 meters) uphill in the Western mountains over those three decades.

The Cameron Peak Fire in Colorado in 2020 was the state's largest fire in its history, burning over 208,000 acres (84,200 hectares) and is a prime example of a high-elevation forest fire. The fire burned in forests extending to 12,000 feet (3,650 meters) and reached the upper tree line of the Rocky Mountains.

We found that rising temperatures in the past 34 years have helped to extend the fire territory in the West to an additional 31,470 square miles (81,500 square kilometers) of high-elevation forests. That means a staggering 11% of all Western U.S. forests – an area similar in size to South Carolina – are susceptible to fire now that weren't three decades ago.

In lower-elevation forests, several factors contribute to fire activity, including the presence of more people in wildland areas and a history of fire suppression.

In the early 1900s, Congress commissioned the U.S. Forest Service to manage forest fires, which resulted in a focus on suppressing fires – a policy that continued through the 1970s. This caused flammable underbrush that would normally be cleared out by occasional natural blazes to accumulate. The increase in biomass in many lower elevation forests across the West has been associated with increases in high-severity fires and megafires. At the same time, climate warming has dried out forests in the Western U.S., making them more prone to large fires. 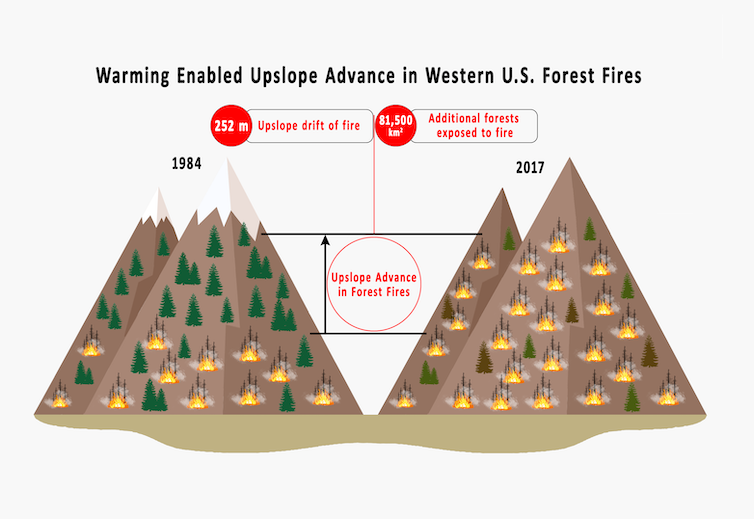 On average, fires have spread 826 feet (252 meters) higher into the mountains in recent decades, exposing an additional 31,400 square miles (81,500 square kilometers) of forests to fire.

By focusing on high-elevation fires, in areas with little history of fire suppression, we can more clearly see the influence of climate change.

Most high-elevation forests haven't been subjected to much fire suppression, logging or other human activities, and because trees at these high elevations are in wetter forests, they historically have long return intervals between fires, typically a century or more. Yet they experienced the highest rate of increase in fire activity in the past 34 years. We found that the increase is strongly correlated with the observed warming.

High-elevation fires have implications for natural and human systems.

High mountains are natural water towers that normally provide a sustained source of water to millions of people in dry summer months in the Western U.S. The scars that wildfires leave behind – known as burn scars – affect how much snow can accumulate at high elevations. This can influence the timing, quality andquantity of water that reaches reservoirs and rivers downstream.

The loss of tree canopy also exposes mountain streams to the Sun, increasing water temperatures in the cold headwater streams. Increasing stream temperatures can harm fish and the larger wildlife and predators that rely on them.

Climate change is increasing fire risk in many regions across the globe, and studies show that this trend will continue as the planet warms. The increase in fires in the high mountains is another warning to the U.S. West and elsewhere of the risks ahead as the climate changes.

[Understand new developments in science, health and technology, each week.Subscribe to The Conversation's science newsletter.]