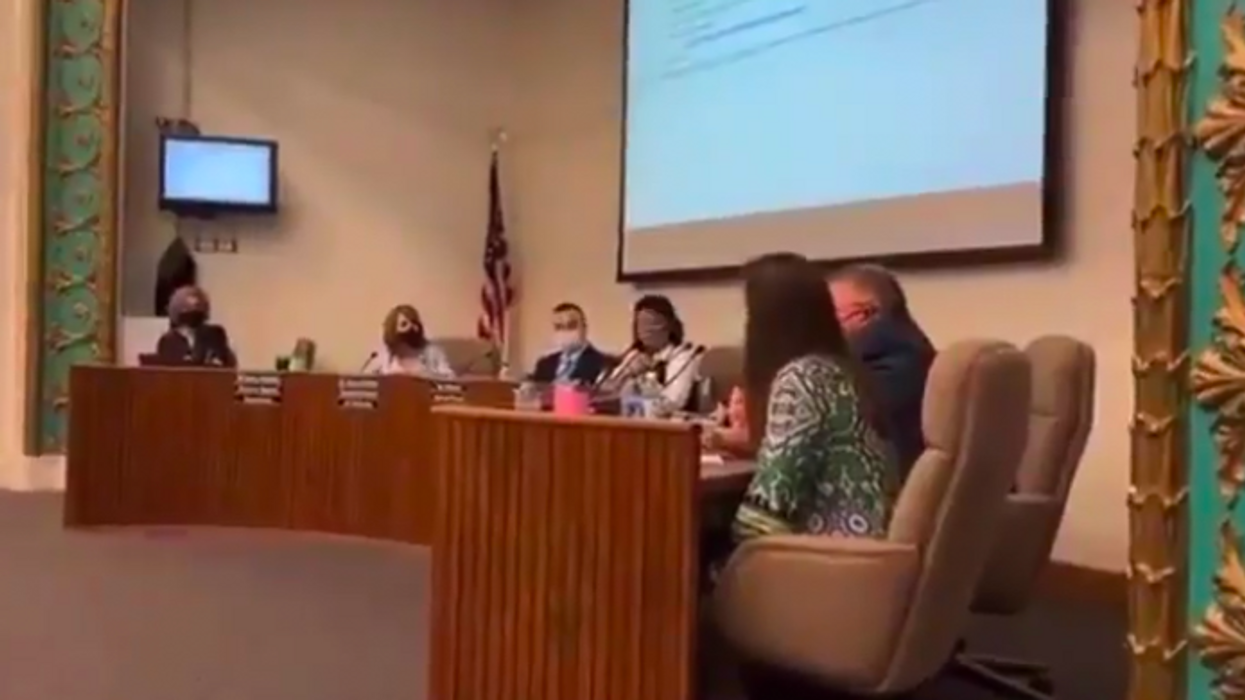 Image via Screengrab.
Dartagnan
and
Daily Kos
May 10, 2021

Wei Ueberschaer is the chairperson for the District 5 school board in Santa Rosa county, Florida. On May 3 the school board met to discuss lifting mask restrictions currently in place in that county's school system. Aware of the contentious nature of the topic, Ms. Ueberschaer began to read a statement she'd prepared, acknowledging the disparity of opinions on the issue but urging attendees at the public meeting to respect the decisions of those parents who wished their children to continue wearing masks at school.

But respect was apparently an unfamiliar concept for several of the attendees, who immediately began yelling pointed racial and political slurs at Ueberschaer, who is Chinese-American and has resided in the county for over twenty years.

The uproar from parents objecting to a mask requirement was so loud that Santa Rosa County school board member Wei Ueberschaer, who is Chinese American, did not hear it when she was called a communist and a man in the audience ridiculed the country her family is from.

"This is Santa Rosa County, not China," he taunted.

The bigot that uttered these slurs has not been identified, but can be heard in the clip of the incident, below, along with others shouting "Democrats," "Communists" and "RINO's."

This verbal barrage of Republican hate was particularly ironic since the school board had already decided to lift the mask restrictions and replace them with a recommendation.

The gentleman was partially correct, however. This is most definitely not China. China actually has had the pandemic under relative control since last November. That is due to various measures and cultural differences including a strong, centralized governmental response to the pandemic. Also China is not a democracy, unlike the U.S. which permits ignorant assholes like these the opportunity to vote in such a manner that can actually influence national policy; in this case, the people shouting racial and other slurs from the back of the room likely voted for Matt Gaetz, since this is the district Gaetz represents.

Although outnumbered by the loud and nasty Republicans present at the meeting, several parents had written to the board requesting that the mask mandate not be lifted. Rebekah Castor, a reporter for the local ABC affiliate 3WEAR-TV spoke to one of them.

She says she's not surprised no one spoke out in favor of masking during public comment because of the hostility in the meetings from those on the other side.

"Many of us knew the decision was already made because of the state," Colon said. "And just looking at how the board was treated, I can't imagine how I would've felt sitting there being attacked by these people."

The Santa Rosa school board meeting occurred before Florida governor Ron DeSantis issued an executive order on Monday invalidating local emergency orders, but the state's department of education later clarified that DeSantis' order did not apply to school districts. However, the state's department of health last week rescinded its COVID-19 health advisories, including the requirement for masking in situations where social distancing is not possible. According to the WEAR-TV report, many of the school board members cited this as the reason for their decision.

The county currently has 14 students testing positive for COVID-19, while the state's number of cases involving variants to the virus has soared to over 10,000.