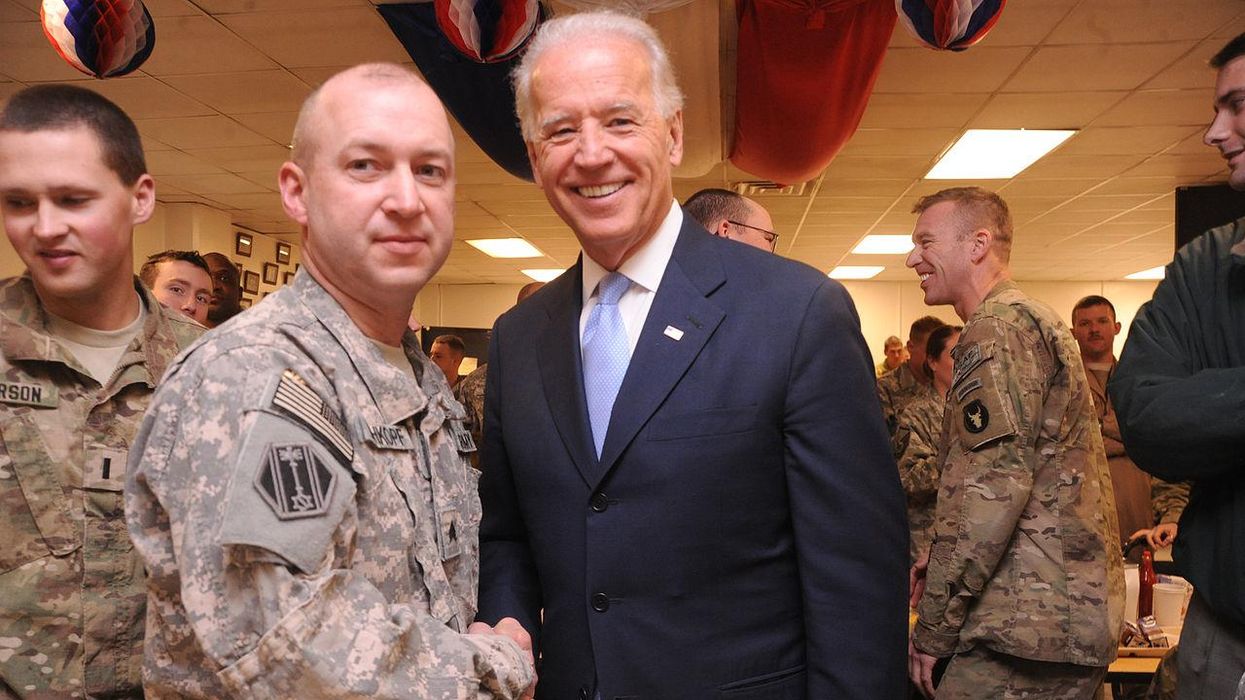 Half a year after now-President Joe Biden won the 2020 election — picking up 306 electoral votes and defeating former President Donald Trump by more than 7 million in the popular vote — Trump cultists continue to push the debunked conspiracy theory that the election was stolen from him. Some of those believers are veterans of the United States military, and veterans who don't buy into the president's lie are speaking out against those who do.

On Monday, May 10, an open letter from a far-right pro-Trump group called Flag Officers 4 America was released — and the letter, which was signed by 124 retired generals and admirals, promoted the false claim that the 2020 election was stolen from Trump and that Trump, not Biden, was the real winner. The letter read, "Under a Democrat Congress and the Current Administration, our Country has taken a hard left turn toward Socialism and a Marxist form of tyrannical government which must be countered now by electing congressional and presidential candidates who will always act to defend our Constitutional Republic." And Politico's Bryan Bender reports that other U.S. military veterans are calling the group out and doing so forcefully.

"As news of the letter spread," Bender reports, "it set off a round of recriminations among current and former military members. One serving Navy officer, who did not want to be identified publicly, called it 'disturbing and reckless.'"

Jim Golby, described by Bender as "an expert in civil-military relations," was vehemently critical of the Flag Officers 4 America letter and denounced it as a "shameful effort to use their rank and the military's reputation for such a gross and blatant partisan attack." And Bender quotes Adm. Mike Mullen, who formerly chaired the Joint Chiefs of Staff, as saying, "I think it hurts the military, and by extension, it hurts the country." Mullen described the letter as being full of "right-wing Republican talking points."

Bender notes that the Flag Officers 4 America letter "was striking for several reasons."

"It is not unusual for retired officers to take sides in electoral politics and endorse candidates," Bender explains. "But its fiery, even angry, language and conspiracy-mongering struck multiple long-time observers as particularly out of bounds and dangerous. Coming outside the campaign season was also seen as rare, if not unprecedented."

The rhetoric in the Flag Officers letter sounds like something that would come from a far-right outlet like WorldNetDaily or One America News. The letter read, "The Current Administration has launched a full-blown assault on our Constitutional rights in a dictatorial manner, bypassing the Congress, with more than 50 Executive Orders quickly signed, many reversing the previous Administration's effective policies and regulations. Moreover, population control actions such as excessive lockdowns, school and business closures, and most alarming, censorship of written and verbal expression are all direct assaults on our fundamental Rights. We must support and hold accountable politicians who will act to counter Socialism, Marxism and Progressivism."

Of course, the notion that the Biden Administration is run by "Marxists" is downright laughable. Biden, a centrist Democrat, is hardly viewed as a role model by actual far-left Marxist groups around the world — and in 2020, he was endorsed by right-wing anti-Trump conservatives who include Carly Fiorina, Cindy McCain, former U.S. Sen. Jeff Flake and former Ohio Gov. John Kasich, among many others.

The far-right Republicans who signed the Flag Officers letter include retired U.S. Army Lt. Gen. William Boykin — who has been expressing anti-Islam and Christian nationalist views and serves as executive vice president of the theocratic Family Research Council — and retired U.S. Army Brig. Gen. Don Bolduc, who is running for a U.S. Senate seat in New Hampshire in the 2022 election. This isn't the first time Bolduc has run for the U.S. Senate; in 2020, he lost a GOP senatorial primary to Bryant "Corky" Messner, who lost to incumbent Democratic U.S. Sen. Jeanne Shaheen in the general election.

Another veteran who signed the Flag Officers letter is retired Vice Adm. John Poindexter, who served as deputy national security adviser under President Ronald Reagan and was a leading figure in the Iran-Contra scandal — one of the political shockers of Reagan's presidency. In 1986, news broke that the U.S. had sold weapons to Iran's Islamic fundamentalist regime in exchange for the release of American hostages being held in Lebanon — and the proceeds were used to support the Contras, an insurgent group that was trying to overthrow the left-wing Sandinista government in Nicaragua.

Evidence showed that Poindexter was a leading figure in that deal with the Iranian government. In April 1990, Poindexter was convicted on five criminal counts, including lying to Congress and obstructing the congressional committees that investigated Iran-Contra.

Meanwhile, Marybeth Ulrich, a retired U.S. Air Force colonel who teaches at the U.S. Air Force Academy as well as the Army War College, has slammed the letter as "anti-democratic."

Ulrich told Politico, "That was way worse than I was expecting. They are perpetuating the big lie about the election. I think it is outrageous. Some of it is very anti-democratic behavior."

Moreover, Ulrich, according to Bender, will be citing the letter as a troubling example of how military veterans should not conduct themselves.

"They are absolutely violating the norm to be apolitical," Ulrich told Politico. "They are being used for partisan purposes. They are going against their constitutional oath."