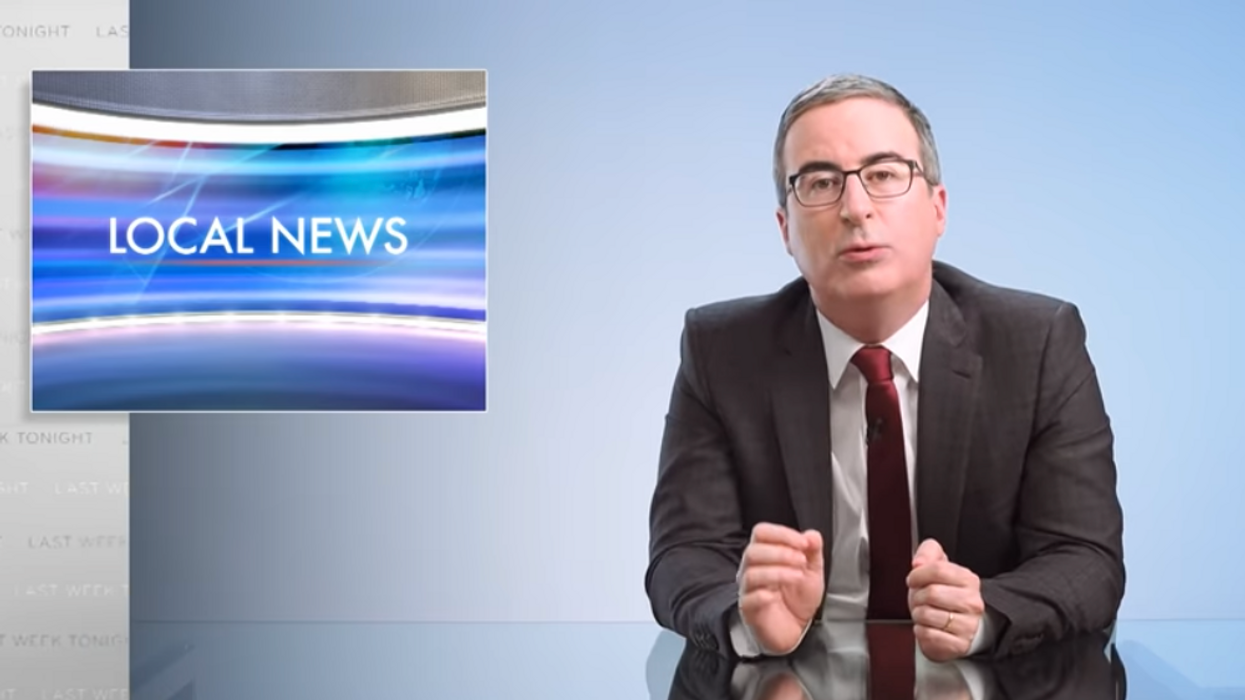 I've spent some time in newsrooms, so I feel like I'm a savvier news consumer than most. While watching the local news, I've occasionally said to my wife, in reference to a particularly fawning segment about a product, "Yeah, that's an ad." (Yes, I'm married. What, do you think I spend my nights curled up in the bathtub clutching an empty quart of Fleischmann's vodka, moaning like a freshly gelded hyena over the sordid state of the world/my fen-like vegetable crisper, and mentally cataloguing my American Girl collection according to each doll's emerging potential to come to life at midnight and murder me with a rhino injection full of Trader Joe's Tea Tree Tingle Body Wash? No. I don't do that anymore. Because I'm fucking married.)

So while I've known for some time that news outlets air paid content—usually accompanied by a disclaimer in a scarcely legible, Planck-length font—I honestly had no idea it was this bad.

In the latest episode of HBO's Last Week Tonight, the sublime John Oliver looked at the devil's pact many local news stations are making these days with paid advertisers, who would obviously prefer to seamlessly integrate their content with these trusted outlets' broadcasts rather than just buy a 30-second spot like everyone else.

And you won't believe what he found.

After a thorough segment on the shady ways shady operators hawk shady products on presumably credible local TV stations, Oliver delivered the coup de grâce. To show how easy it is for sketchy salespeople to get their completely worthless products on air—and to have supposed "medical correspondents" swallow the claims about those products whole—Oliver's team invented a snake-oil product called the Venus Veil, and you won't fucking believe what happened next.

Three stations—KVUE in Austin, Texas; KMGH in Denver; and KTVX in Salt Lake City—swallowed this subterfuge hook, line, and sinker, and in the process showed themselves to be little more than carnival shills.

After coming up with the fake sex blanket (which is actually just a blanket), Last Week Tonight hired a fake spokesperson to flog the product on these "news shows," saying things like, "It is the world's first sexual health blanket" and "the veil is being designed with the hope that it will precisely draw out the natural alkaline undercurrents of the vagina and initiate a low-grade state of what we call micro-death, which sounds impressively scary, but it's actually just restarting that area's life cycle."

Okay then. Even more frightening, the reporter who interviewed Oliver's plant was the station's chief medical correspondent—and she had no followup questions.

"The truth is, none of this was nearly difficult enough to get onto TV, and it wasn't even all that expensive," said Oliver in his closing remarks. Referencing the three segments Last Week Tonight paid for, Oliver continued: "That cost just $2,800. This one cost $2,650. And this one only cost $1,750. It was all shockingly affordable, and sadly, on some stations didn't even look that out of place, and that is not good. Because as we have said for years now, the integrity of local news is crucially important, and there is real harm for everyone if that integrity is damaged."

While this story may seem like a silly diversion, Oliver is right. These issues are crucially important. How else do you think a fake president with fake ideas and fake promises became a frighteningly real POTUS? Because viewers have been dumbed down and cynically propagandized for years now, and to them thinly veiled infomercials and reality TV just look like reality.

That needs to change, and Oliver is one of the few people on the national stage doing anything about it.

The entire segment is here, and it's well worth your time:

John Oliver explains why the integrity of local news is so important, how sponsored content could damage that integrity, and why the Venus Veil is so much mo...